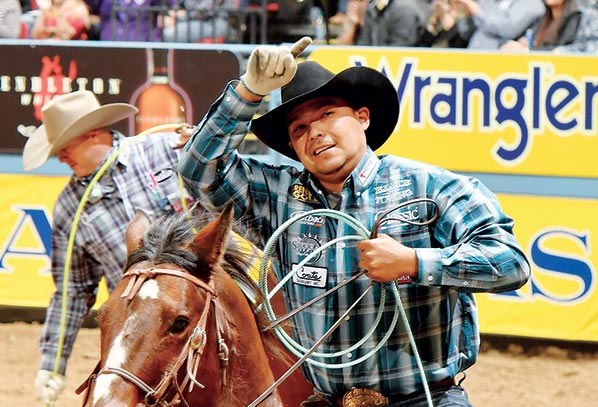 It serves as a daily reminder that anything is possible, considering his path to this year’s finals. In March, the Round Rock, Arizona team roper busted his knee that sidelined him for almost three months.

When he returned in early June he was too far back in the standings but with a sense of urgency he won enough money with new roping partner Clint Summers to sneak into the top 15 to defend his world title.

“We weren’t even in the top 50 going into Reno,” said Rogers, who is currently ranked No. 13 heading into today’s opening round. “It’s been an uphill battle but I changed up some things during the summer. It’s one of those things that you can’t take for granted. You have to keep doing what you are doing and you have to keep grinding it out.”

With Rogers making the cut, this year’s NFR will feature three Diné team ropers as Derrick Begay and Aaron Tsinigine will join the eight-time NFR qualifier during the 10-day world finals that will have over $1.1 million up for grabs at the famed Thomas & Mack Center in Las Vegas, Nevada.

“The first one was sweet but I like to repeat and get one for the kid,” Rogers said of Summers, who earned his first qualification.

“I am so proud of him in what he did during the summer,” he said of the Lake City, Florida cowboy. “It was tough at times but being a veteran and being the guy that knows how to win I think I helped him along. I coached him a little bit when times were tough, when he needed someone to look to. I was glad to be the guy to help him get here.”

Of the three Diné contingent, Begay heads the pack as the Seba Dalkai, Arizona cowboy is ranked No. 8 in the world, having won $84,837.

This is Begay’s eighth qualification with his last coming in 2015 when Tsinigine won the world.

“It’s been a couple of years since I’ve been over there but I’m real excited about going back,” said Begay, who is partnered with Marana, Arizona cowboy Cory Petska “I think I’m more excited now than when I first went.”

In his last qualification, Begay finished eighth in the average race as he got off to a sizzle start by winning a couple of rounds.

“I want to try and keep it simple but in that arena you have to stay aggressive,” he said. “It makes it harder when you’re not so you have to press on the gas, but you still got to be in control. You can’t give too much or take too much.”

Begay said some cowboys go for broke so there is a fine line in being too aggressive.

“Most guys kind of push that line,” he said. “When they push past that line it gets them in trouble. The risks are much higher if you’re more aggressive.”

Tsinigine concurred. His game plan is similar to Begay as he’s looking at the bigger picture.

“I’m going to run at that barrier 10 times,” Tsinigine said. “Ever since I made it I’ve always said if you get 10 barriers and 10 legs you’re going to win first or second in the average. As long as you can catch 10 you’re going to get a pretty good paycheck.”