Nez only bull rider to cover 2, leads in points 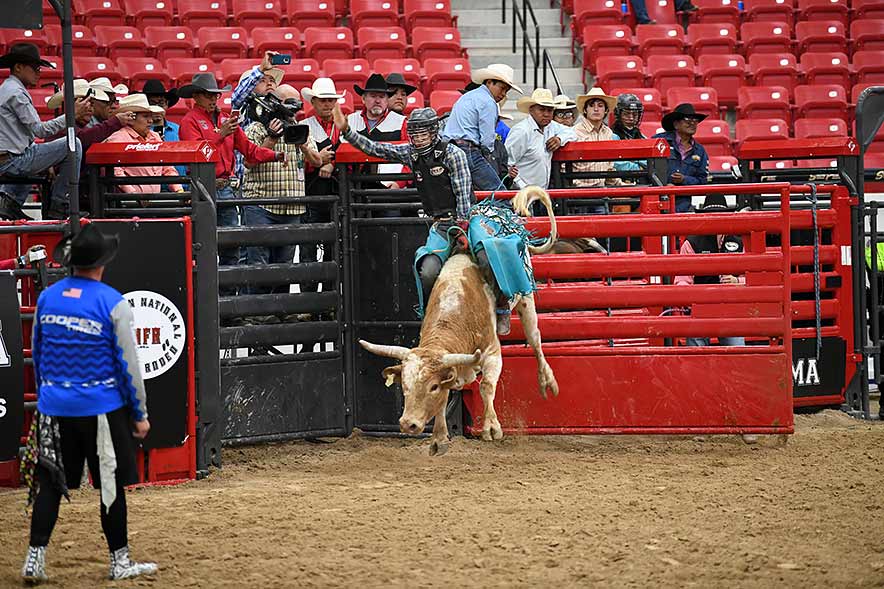 After two rounds of competition, Nez is the only bull rider to cover both of his draws as he leads the aggregate race with 150 points.

“I’m so grateful to be here,” Nez said. “This is my first year here at the INFR. A lot of guys were telling me to give the INFR a try and I really appreciate all the help I’m getting.”

In Tuesday’s opening round, Nez finished in a two-way tie for second place with Stran Smith as both cowboys finished with identical 76-point rides with Nez earning that mark on a reride bull.

“Both of those bulls definitely made me work,” Nez said. “The one tonight got me on my arm and I kind of paid for it but I just kept trying to hustle.”

The INFR will resume tonight at the South Point Equestrian Center with the bottom 11 rough-stock riders and the bottom 17 timed-event contestants getting their third draws.

Nez, meanwhile, will get his third bull on Friday night with the top contestants advancing into the Saturday night’s short round performance.

In addition to Nez, two other Diné cowboys also lead their respective events heading into third round.

Kaye leads the pack with 164 points, which includes a first-place finish of 84 points in the opening round. In Wednesday’s second round, Kaye finished in a two-way tie for second with an 80-point ride.

In the team roping, 2018 INFR world champions Edward Hawley and Myles John (Diné) are looking to repeat as champions.

The duo produced a 5.80 run on Wednesday night as that effort earned them an 11.48 aggregate. They lead the team-roping race by nearly a second with Rawley Ben and Brandon Ben turning two steers in 12.47 seconds.

In the tie-down event, Quinton Inman has a slight advantage over 2018 world champion Donovan Yazzie. Inman leads the race with a 20.50 aggregate while Yazzie is a close second at 20.67.