Ever since the age of five, Cassie Bahe-Latham has held a love for horses. Her sister, Anna Bahe, took a little while longer before she too grew a bond with horses. Their father, Francis Bahe, taught them to ride and rope, a family tradition that stretched back to their grandparents. Another trait that connects them, though, is the fact that they all had a taste of professional rodeo. 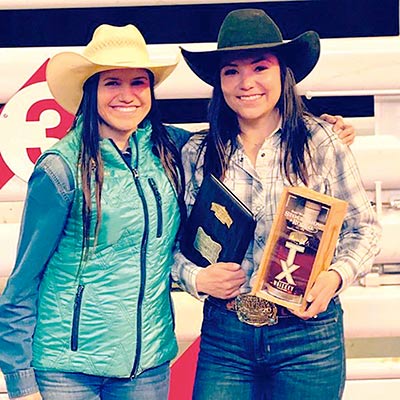 Submitted
Cassie Bahe-Latham (right) poses with her sister Annie Bahe (left) after capturing the inaugural breakaway title at the 124th Fort Worth Stock Show and Rodeo in January. Bahe-Latham netted $23,000 while her sister won $9,000.

Last year in November, both Cassie and Anna competed at the 124th Fort Worth Stock Show and Rodeo (FWSSR) in Texas and were among the first athletes to perform at the new Dickies Arena.

Cassie took it a step further by becoming one of the FWSSR Pro Rodeo Tournament champions. She claimed the title for breakaway roping with a 2.3-second finish.

“It was very cool to win,” Cassie said. “It was also the first year that they had breakaway roping.”

Anna made it to the finals and won $9,000. It was an excellent competitive event between the sisters.

Both sisters give credit for their successes and their love for horses and roping in general to their father, Francis Bahe.

“He’s always out there helping us to practice,” Cassie said. “Going with us to rodeos and everything, that’s pretty helpful. And it’s cool that we can do it as a family because me and my sister were always going to rodeos, and he would come too.”

Francis grew up on the reservation and had learned to appreciate horses from his own parents.

“I grew up, and that’s all I did, I just rode every day, after school and go anywhere I wanted to,” Francis said.

For him, rodeo is a sport of discipline and time. Depending on how much you dedicate to working with horses and honing the skills that come with it, it’ll determine your overall capabilities. It’s not like a team sport where you rely on teammates and coaches; it’s just you and the horse.

“You control your own destiny,” Francis said.

He would rope for many years before passing on what he learned to his three daughters. Although he competed briefly in national rodeo, he said it was different from how things are with his daughters.

“I wasn’t as good as these guys (Cassie and Anna),” Francis said. “I had to work for a living and had to do it [rodeo] on the weekends. I did go to some professional rodeos, but not like how we travel cross country like we do now.”

Although he’s happy with how his daughters performed at Fort Worth, and all other rodeos before then, he is pleased that they, as he put it, kept their priorities in the right place as they finished school while competing.

“Yeah, I’m extremely proud of them,” Francis said. “They put in the time and effort, and it paid off right now.”

While having competed on the national level, it has been recently challenging to find a rodeo during the coronavirus pandemic.

“Last year, we would go nonstop during the summer,” Anna said. “This summer, we were lucky to go every other week. Now we’re starting to go where they’re having it (rodeos) every weekend. But a couple of months ago there really weren’t any at all. It’s kind of hard not going to any.”

The family had gone into lockdown during the spring when the pandemic first began. Now that restrictions have lessened, they return to the sport that they love, but not without some difficulties.

“With work and everything, it affected how we interact with everybody,” Francis said. “It’s different now that you can’t just go and hang out with friends and do things as a family also.”

The pandemic hasn’t diminished the family’s enthusiasm for the sport, but it has slowed them down a bit.

“It hasn’t affected my practicing for rodeos at all, but a lot of rodeos have been canceled because of the pandemic, so we kind of been hitting all the rodeos that are still going and that have breakaway roping. Some of them don’t have breakaway roping, and it was kind of a bummer that a couple of them canceled, especially the big ones that were going to have breakaway this year, but they’ll have it next year, which I’m looking forward to,” Cassie said.

For both ropers, rodeo is a fun sport that they love competing in, but for now, they are more focused on beginning their careers, although the young athletes still have great ambition for the sport.

“Yeah I would like to do that (rodeo professionally) when I’m older, definitely,” Anna said. “It’s expensive, though; I think I would definitely need a job for hay, horse costs, trucks, and trailers. But maybe when I’m older, that would be nice.”

Cassie had similar thoughts as well.

“I would really love it if breakaway roping was an event in the NFR, the National Rodeo Finals, and I would love to be there one day,” Cassie said. “That would be my ultimate goal and dream for rodeo.”

For now, the family will continue to ride wherever they can, and although the virus casts a grim shadow over the world, they still have reasons to be happy. This August, Cassie married Andrew Latham, a fellow athlete who plays hockey, and they’re enjoying their time as a newlywed couple.