After years of trying, the stars seemed to align for Serena Dahozy.

The Fort Defiance cowgirl turned in a masterpiece performance on Sunday afternoon at the Dean C. Jackson Memorial Arena as she captured three titles at the 73rd Annual Navajo Nation Fair.

Dahozy won the aggregrate race in the ladies team roping with heading partner Jeanna Johnson, as well as the ladies breakaway event. 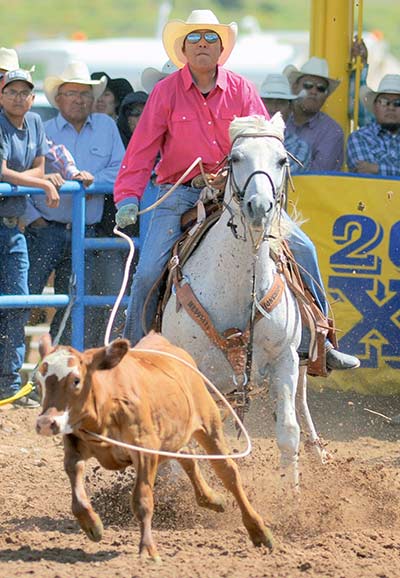 Breakaway roper Serena Dahozy gets her lasso around the calf’s neck and begins to quickly stop on Sunday at the 73rd annual Navajo Nation Fair Rodeo at the Dean C. Jackson Memorial Arena in Window Rock.

“I’m just happy,” Dahozy said afterward. “This is a real nice trailer. It’ll be great for my horses to get in.”

Before accepting her trailer, Dahozy showed the packed house how dominant she was by winning the Final Four showdown in the two events she entered.

In the showdown, she roped her breakaway draw in 2.2 seconds, beating out the 2.5 run turned in by Danielle Lowman, last year’s NNF all-around winner.

“I just made sure I caught and, you know, I got out on just right with the barrier,” she said.

In the ladies’ team-roping showdown, Dahozy and her roping partner had plenty of time to work with as Utah Ward and Jolene Yellowman started things off by recording a 14.5 run, which included a 5-second penalty.

The next two teams posted no times so the Dahozy/Johnson pair just needed to make a clean run. They did that by stopping the clock in 7.5 seconds.

“I just tried to do my job and I made sure I caught all of them,” Dahozy said of her exploits.

Going into Sunday’s short round, Dahozy came into the ladies breakaway roping as the high call-back by roping two previous draws in 5.5 seconds. Former WPRA world champion Debbie Robbins trailed a close second with a 5.7 aggregate.

In the short round, Robbins posted in 3.0 run as that effort gave her an 8.7 aggregate with Dahozy the last one to rope.

The 28-year-old cowgirl did Robbins better by recording a 2.1 run to win the title.

That performance settled some of the heartaches she’s endured by not closing out the deal as the high call-back roper.

“I’ve come close in previous years and it didn’t work out until today,” she said.

Much like her breakaway circumstances, Dahozy came in as the high call-back in the ladies team roping with her roping partner.

In the first round they posted a first-place run of 6.8 seconds and in the short go they won that round with an 8.8 run for an aggregate of 15.6 on two.

“She turned steers for me and I just heeled them,” Dahozy said of Johnson, who made the trek down to Window Rock from Oregon.

Dahozy was very thankful that rodeo committee made a concerted effort to include ladies’ team roping in Sunday’s showcase. In previous years, it was a one-go round event and this year the competitors roped at least two draws.

“I’m happy that they did it like that,” she said, while noting that it gave the crowd a chance to see how competitive they rope.

In the barrel-racing event, Kassidy Dennison was just as dominant as she placed in every round. The Tohatchi, New Mexico, cowgirl won the average title as well as the Final Four round for a grand total of $5,576.04, which included a $2,000 payout in the showdown.

“This arena has blessed me a lot and I’m just lucky enough to ride outstanding horses,” said Dennison, who won the title in 2014 after a five-year hiatus.

In that year, she mesmerized the fans by winning the event with her then-horse Eagle. During the weeklong rodeo, she captured another buckle by using her five-year old mare Candy.

“This means a lot, especially with the last horse I won it on,” she said. “I was glad to be a part of his career and, of course, this arena is named after my late grandfather. It means so much to be involved in an atmosphere like this.

“I love this rodeo,” she added. “Of all the rodeos this is my favorite rodeo.”

Dennison won the opening round with 17.43 effort and in the second go she finished in a two-way tie for fifth with Adoncia James as both cowgirls recorded identical 17.66 runs.

In her best performance yet, Dennison turned in a rodeo-best 17.16 in Sunday’s short round.

“I felt like my horse was more confident today,” she said. “We kind of struggled in the second round with the rain we had yesterday (on Saturday). I think that kind of cost us from placing higher but I’m glad we made a clean run.”

In the shootout, Dennison posted another solid run as she bested those other barrel racers with a winning time of 17.20 seconds.

“My goal was to go for it because you never know,” she said. “It’s anybody’s ball game so I knew that I had to come out and make a really good run.”