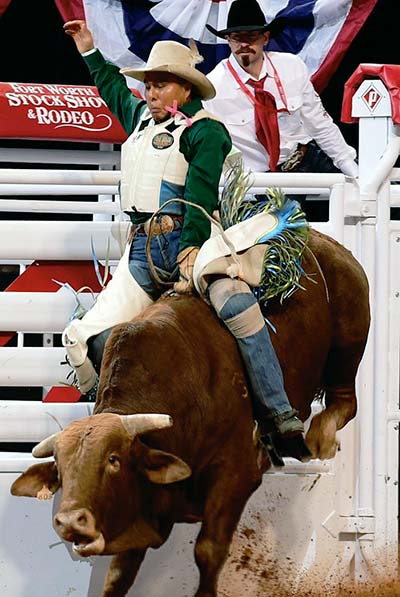 Begay captured gold in the 50-plus bull riding while Roanhorse won the 60-plus team roping title on the heeling side.

“This is a prestigious award,” said Roanhorse, who accumulated 513 points in the season standings. “I always wanted to win this award. I’m real humbled by this because it makes you feel good when you win something like this. All I can say is I had a good year.”

Begay was also humbled by winning the year-end title, which is one of many accomplishments he’s achieved in his 40-plus years of rodeoing.

In those four decades, the Shiprock bull rider has captured 18 world titles including a dozen in the NSPRA organization.

“I’ve had a lot of highlights in my career but I think all those world titles are pretty special,” said Begay, who was very appreciative of his support system.

“I like to thank Lonette Lee, and my brothers and sisters,” he said. “They are the ones that supported me. I also want to thank all of my great fans and all the bull fighters.”

In 2016, Begay was inducted into the INFR Hall of Fame, earning 20-plus qualifications.

Since joining the NSPRA association in 2008, Begay has reached the world finals every year and he’s taken home the gold for all but one year.

He credits that marvelous streak to his workout regimen, which includes cardio and weight lifting.

“I do a lot of running,” Begay said. “I run real early in the morning before I go to work.”

With the desire to stay fit, Begay said he never thought about retiring from the sport. He wants to continue to ride bulls as long as he enjoys it.

“My training never ends,” he said. “I think that is what keeps me going.”

Besides, Begay said, he grows restless when there is a break in between the seasons.

“I start to crave it again,” he said.

In addition to keep his lifestyle going, Begay said he draws motivation from watching prorodeo on TV.

“I watch all these good rides and that is what gets me going,” he said. “At the same time this is what I like doing.”

Begay said he’s very appreciative that the NSPRA is able to keep him in the game as the association caters to cowboys and cowgirls 40 years old and older.

According to the organization’s website, the association usually has approximately 60 rodeos in the U.S. and Canada but this year they only hosted half of that due to the pandemic.

“I went to a couple of them before it was shut down,” said Begay, who finished with 710 season points.

Like Begay, Roanhorse said he’s grateful to be a part of a great association.

“I like this organization because it’s real competitive,” he said. “It’s more organized and it’s real professional. The people here are always welcoming you so I feel real comfortable being around them. A lot of them are really helpful.”

Having been a member since 2005, Roanhorse said this was his first time capturing the year-end title and he credited his roping partners, including Tohatchi cowboy Gerald Moore.

This past year, Moore finished as the reserve champion, accumulating 309 points.

“I mostly roped with Gerald but this year they (NSPRA) incorporated a new rule,” Roanhorse said. “We had to draw partners and a lot of the guys that I drew with roped really good. That is how I accumulated my points.”

Roanhorse credited his family and friends for winning the year-end title while adding that his horse, Blueberry, made him a better competitor.

“With my horse I always try to do better than what I did the day before,” he said.

As an avid competitor, Roanhorse said the cowboys and cowgirls in the NSPRA are not in it for the money.

“This is a hobby for us,” he said. “We just love to compete and like anything else if you enjoy it – just do it.”

With the new year about to roll around, Roanhorse said he’s planning on buying his membership card next year.

“This is a passion that I have and it’s good to compete against guys that I have never met before,” he said.

“I’m looking forward to it,” he said. “Like I said my training never ends. I still run early in the morning and all the workouts I do will prepare me for next ride.”