Wild Thing is set to go Friday and Saturday

Despite a one-year hiatus Wild Thing promoter Larry Peterson said his iconic event is not going to miss a beat. 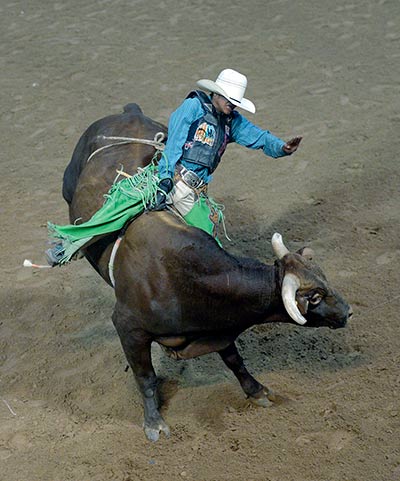 The two-day event starts on Friday with the gates opening at 6 p.m. at Red Rock Park, as several of the top bull riding hands will vie for a large sum of cash which includes a pair of Brazilian bull riders.

Start time for the event is set for 8 p.m. and the format will be same for Saturday’s finale.

“We’re going to bring the big wild show back just like we always do,” he added. “We didn’t back down from anything and we’ll have a few surprises.”

With the pandemic canceling last year’s event, Peterson said it was extremely tough to get things rolling again but his entire team has been working hard at getting the park ready for this weekend’s event.

“The park needed a lot of attention after sitting there dormant for two years,” he said, while adding that there were other logistics they had to deal with.

With the state of New Mexico fully reopen Peterson said he’s ecstatic about hosting this year’s event, which is in its 28th year.

Tickets for the event is $30 for adults and $10 for children at the gates. Advance tickets can be purchased at Castle Furniture, T&R Country Store and T&R Feed for a discounted price of $8 for children and $22 for adults on Friday and $25 for Saturday.

“We won’t have any COVID restrictions,” Peterson said. “It’s just up to the individuals if they want to wear a mask – that’s fine and if they don’t – that’s fine too.”

This year lawn chairs are not going to be allowed in the park, Peterson said.

“We’re trying to give a heads up for everyone because if they show up with them, they’re gonna have to carry them back to their vehicles,” he said. “Cushions are OK and folded up blankets are OK but not lawn chairs.”

In Friday’s performance, Brazilian bull riders Junior Patrik Souza and Paulo Lima will take their plunge. Souza is currently ranked No. 11 in the PBR world standings while Lima is 37th.

“They’re actually going through here on their way to a PBR in Texas,” Peterson said. “They’re both gonna ride and I think they might be at my autograph table.”

Other top bull riders competing include four returning champions. Two of those past champions are Diné cowboys Cody Jesus and Tustin Daye. Also in the mix is Ryan McConnel and two-time champion Lane Nobles.

Those bull riders will compete against the top bulls from renowned stock contractor Sammy Andrews Rodeo Company. Owen Washburn and local contractor 4B Bucking Bulls will also have their top bulls there as well.

And although his event is catered to the riders, Peterson said the event is more than just that.

Peterson said the pyrotechnic display is big hoot for the fans that attend.

“We have one of the best fireworks display in the area,” he said.

The ever-popular Cowboy Poker is back, which is a big favorite for a lot of the Wild Thing followers, Peterson said. He said the fans also get a big kick out of the rock ‘n’ roll music they play and all of the pre-entertainment they do before the show.

“We do all of that to make sure everyone is having a good time,” he said. “We want to slap them around and make them scream, make them laugh and quiver so they want to come back again.”

Each night, the event will also be giving away a pair of 55-inch Sharp television sets, courtesy of Castle Furniture and Shush Yaz Trading.

As always, the Wild Thing production is going to continue its partnership with Manuelito Children’s Home and the Gallup Christian School.

“Be sure to support the Manuelito Children’s Home because it hurt them real bad last year with no event,” Peterson said, while adding that he would like for things to get back to some sense of normalcy.

With his production, Peterson said, this will be the first event that Red Rock Park has had in the past two years as the pandemic canceled all events last year.

“We’re going to rock and roll and we’re excited about getting back into the habit,” he said. “The main thing we want is for everybody to come out and just really enjoy the first big event in the Four Corners after all the shutdown.”