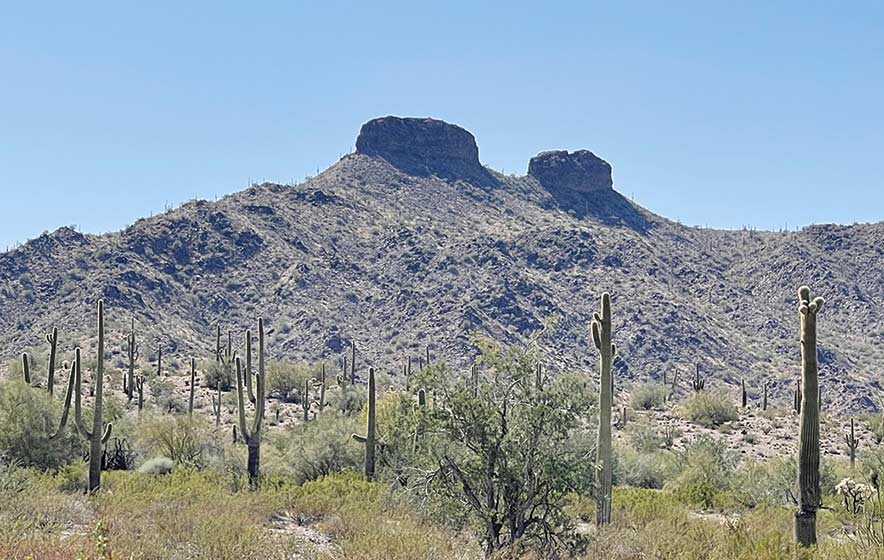 Courtesy photo | Jennifer Touchine
Isanaklesh Peaks tower over the desert 32 miles south of Phoenix. The name was changed from one deemed derogatory to Native Americans.

It was a January afternoon in Table Top Wilderness, located 32 miles south of Phoenix, a region of flat-topped mesas, wide canyons, and desert ridges.

This is a popular destination for hikers like Jennifer Touchine, an avid Diné hiker and founder of Hózhó Life Inc., a Phoenix based nonprofit.

After a 10-mile hike to Table Top Peak, Touchine and a friend used Google Maps to view nearby mountains. It was then they discovered the name of a nearby peak – “Squaw Tits.”
“I was taken back by that,” said Touchine.

Asked if she was aware of the peak, she said, “I had no idea. No one’s ever mentioned it.”

Touchine said she was shocked and for a moment believed it had to be completely unknown to the public.

“I don’t think anyone knows,” said Touchine, recounting that afternoon.

The discovery led Touchine to research the peak’s name where she learned that efforts had long been underway to change the name.

“There was already a petition that someone started two years ago,” she said. “So I thought, ‘Why recreate the wheel when someone already started it?’”

The petition was started in August 2019 by Team MOTHRA (Mavens Of The Hunt Ready For Anything), a 15-person competitive GISH (Greatest International Scavenger Hunt) team with members in the United States, Mexico, Canada, Germany and Spain.

Touchine explained the petition was given as a challenge to Team MOTHRA. The team was competing in a GISH event with the goal of completing tasks from a list of a variety of challenges.

Unknown to them, the peak’s name was officially changed the exact day Touchine and Team MOTHRA got in contact.

“That day that it officially changed is the day I heard back from the person who started the petition,” Touchine said. “We didn’t know until the following Tuesday that they changed it.”
The peak, located 20 miles west of Table Top Wilderness, outside of Gila Bend, Arizona, was officially changed to Isanaklesh Peaks, an Apache term meaning Mother Earth, on Feb. 11, 2021.
Benton provided some background on the petition.

“In August 2019, item 185 of GISH was to legally rename a place with an offensive name,” Benton said. “I found a mountain in Maricopa County, Arizona, called Squaw Tits and submitted a formal name change request through the United States Board on Geographic Names.”

Benton said the petition was formally rejected in October 2020 by the Arizona State Board on Geographic and Historic Names. The reason, the board said, was becaue the name “Isanaklesh” was from the Mescalero Apache Tribe in New Mexico rather than Arizona. The board did not receive feedback from the Mescalero Tribe and did not want to enact a change without confirmation.
Benton praised Touchine for the renewed effort behind the petition.

“We do not know the exact timeline of events or how the decision to finally change the name was made,” she said. “Our best guess is that the U.S. board took notice to the popularity of the petition and pushed through a citation renaming this peak in the Sonoran Desert.”

Both Touchine and Benton were completely surprised by the change and weren’t notified officially until a week later.

“I don’t know who changed it, if it was BGN or Arizona,” said Touchine. “I’m not sure where it officially got changed. We have no information of whose hands it got into to be changed.”

According to Jennifer Runyon, research staff with the U.S. board, the Bureau of Land Management informed the board on Feb. 2, 2021, that they supported the change.

BLM said there was disagreement among tribes on the new name but the existing name was “clearly offensive weighed in on our reasoning.”

The proposal for “Isanaklesh Peaks” was a part of board’s Feb. 11 docket and was approved by a vote of 14-1, with one abstention.

Runyon said the board’s official database was updated the same day and the new name will appear in the U.S. Geological Survey topographic maps when they are next revised.

Touchine has shifted her focus and efforts into getting other peaks in Arizona renamed.

There are 73 natural features in the state of Arizona that still contain “squaw” in their name, according to Touchine.

In the past 15 years, two Arizona summits have been renamed. In April 2010, “Squaw Peak” was renamed to “Piestewa Peak” and the second was Isanaklesh Peaks.

“I made the decision to link the organization to working on renaming these summits,” Touchine said. “These summits that were given these inappropriate names, relate to our people, Navajo.

That term is an old term and it’s a derogatory term. It shouldn’t be used.

“I’m going to work on changing all of them,” she said.

Touchine’s next petition is for a peak south of Isanaklesh Peaks near the Tohono O’odham Nation and she has reached out to them on the renaming effort.

She encourages everyone to get out and take advantage of the trails and lands.

“There are so many benefits of hiking,” she said. “It could help with a heart condition. It could help with losing weight. It can help with your mental health. Just being in nature itself.
“It is so wonderful to get away from the city,” she said. “Get on those trails and get far enough from trailheads where you are alone. It gives me time to think, time to enjoy. I can kinda reset. I’m a lot happier.”

Touchine and members of Team MOTHRA will coordinate efforts to get two names of natural features changed in the coming months – “Squaw Tit” in the Sand Tank Mountains in Maricopa, Arizona, and “Squaw Peak” south of Camp Verde, Arizona.

“All we can do now is acknowledge that these are inappropriate and the term is derogatory and we should not use it anymore,” Touchine said. “Just need to move forward and work together.”