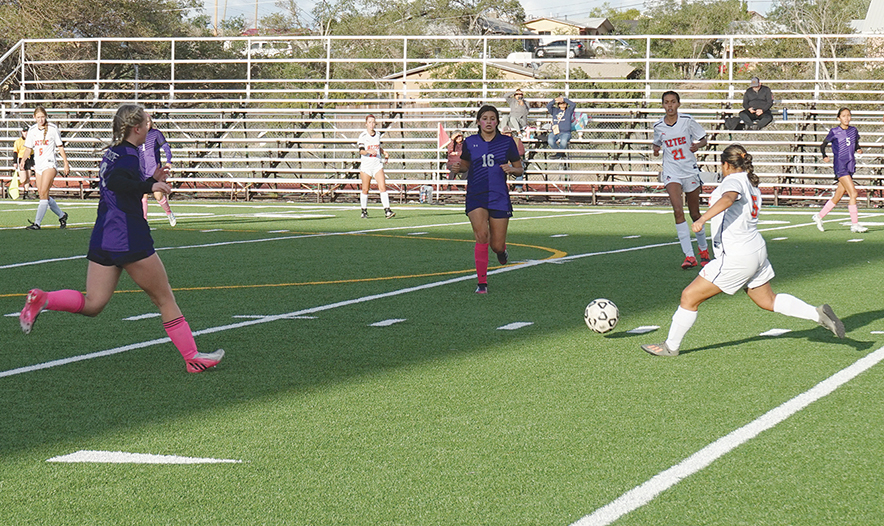 Navajo Times | Quentin Jodie Aztec Lady Tiger Jewelie Briggs goes after the ball against the Miyamura Lady Patriots earlier this season. The Lady Tigers earned the No. 6 seed for the Class 4A state soccer playoffs.

The Class 4A and 5A first rounds start on Tuesday in the 12-team brackets, with the top four seeds earning byes.

The next four seeds will host the first-round game, with the winners advancing into the next round at the sites of the higher seeds on Friday or Saturday.

“Overall, as a team, we’re excited about getting the No. 6 seed,” Aztec coach Leroy Nelson said. “But, we have to take it one game at a time. We’re not going to take Valencia lightly. We got to go in there and do our jobs and put the ball into the net.”

And although his varsity squad has not played Valencia this year, the Aztec JV dropped a 1-0 decision to Valencia during the Navajo Prep championship game in early September.

“I was there, and we videoed the game,” he said. “Back then, I didn’t think we would see them, but lo and behold, we’re playing them again.

“I have a good idea of how they play,” he added. “During that tournament, I took notes on who their strikers were and who their midfielders were.”

The Kirtland Central girls, the district’s reserve champion, will entertain league member Bloomfield at 6 p.m. in a No. 7 vs. 10 matchup.

In the boys bracket, Miyamura garnered the No. 10 seed, and they will travel to No. 5 Highland in Albuquerque at 6:30 p.m. 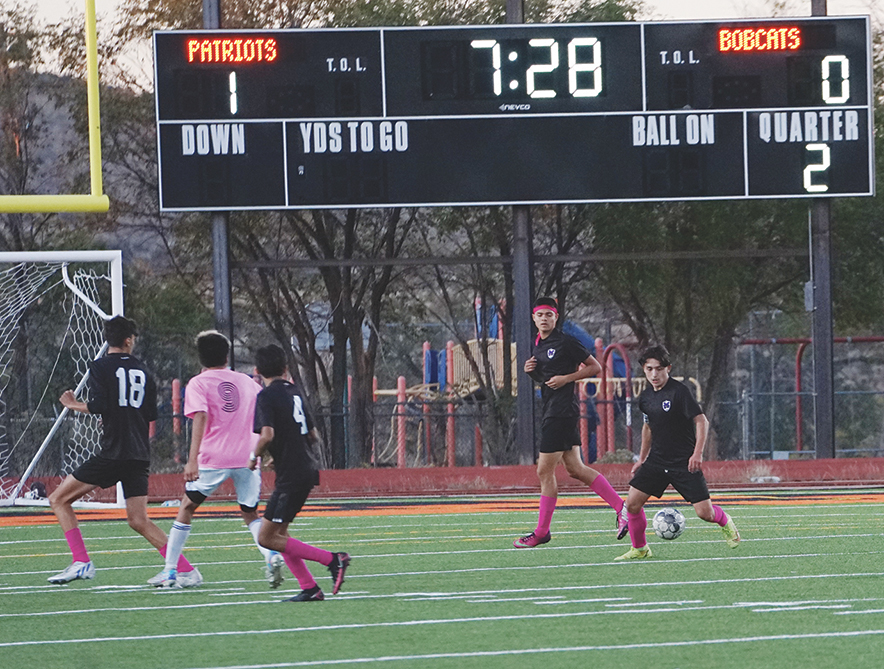 Navajo Times | Quentin Jodie
Miyamura midfielder Mateo Juarez (right) dribbles the ball in this file photo against the Bloomfield Bobcats. The Patriots were seeded No. 10 in the Class 4A boys bracket.

This is the Patriots’ second consecutive trip to the playoffs under head coach Ralph Castaneda. Before that, Miyamura’s playoff qualification came during the 2013 season.

“The kids are elated to be there, and it’s an accomplishment for them,” Castaneda said. “I can’t express how happy I am for us to get a second chance at state. The hard work they’ve been putting in since June is paying off.”

The Class A-3A bracket features eight teams, with the Rehoboth Christian girls being the lone qualifier.

The Lady Lynx was seeded eighth, and they will take on top-seeded Sandia Prep on Saturday at 11 a.m.