The learning curve would have seemed steep for the Navajo Prep girls’ cross-country team. 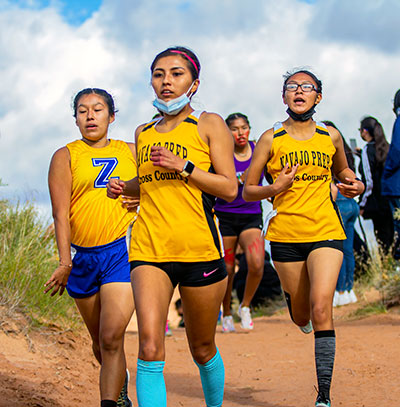 The Lady Eagles didn’t have a fall season last year and head coach Stephanie Zahne Coon didn’t know what to expect from her young squad.

Coon said they did try to start preseason training for the delayed 2020 season but those plans were put on the backburner when the school announced that they were unable to offer fall sports for student-athletes.

At that time, Navajo Prep was abiding by the rules set by the Navajo Nation’s Department of Diné Education, which passed a resolution in January of this year to continue remote learning.

As a perquisite to participate in sports set by the New Mexico Activities Association, the school needed to operate in hybrid learning.

Despite having no season last year, the Eagles have showed signs of being in seasoned form.

On Saturday, they finished second behind Shiprock in the team standings with the Lady Chieftains winning the 13-team meet with 88 points while Navajo Prep tallied 105 points.

“This is a whole new team,” Coon said. “I really don’t have anybody that’s a returning athlete, so I have a fairly young team. The girls are fairly new so I’m trying to be positive and I’m trying to be optimistic.”

The Eagles are led by the 1-2 punch of sophomore Nicole Tsosie and senior Laila Charley, with the latter overcoming long odds after suffering a traumatic brain injury.

“That girl is strong mentally and physically,” Coon said of Charley. “When we’re lifting weights, she’s a go-getter. I honestly didn’t know her story when she started the season, but she just amazes me.

“She been through a lot and I can’t believe what happened to her and how far she’s come,” she added. “The girls know her story and in her own quiet way she gets them going and they all motivate each other.”

Coon said her girls are a close-knit group and she attributes that to Charley.

“The girls have come together and she’s a big part of that,” she said.

Tsosie agreed, adding that Charley has taken over the leadership role.

“She pushes me and she just pushes all the girls,” Tsosie said. “She’s the oldest and a lot of girls look up to her.

“She’s very inspiring,” she added. “I have two family members who have brain injuries and they’re not as recovered as her.

“They’re functional and they can do things on their own but compared to Laila it’s a miracle that she’s gained her mobility the way she has,” she added. “It’s really remarkable.”

At the Zuni meet, the two frontrunners finished fifth and 11th overall with Tsosie clocking in at 21:42.76 while Charley crossing the finish line at 22:33.84.

Other finishers for the Eagles were Harmony Boone in 27th, freshman McKenzie Ashley-Willie in 31st, freshman Hailey Thomas in 40th and freshman Danielle Becenti in 51st.

Tsosie said not having a season last year set her back. Nonetheless, she has dreams of being one of the best runners at the 3A level.

For the current season, she’s chasing Zuni frontrunner Alexandria Bewanika. In Saturday’s race, the Zuni senior finished fourth with a time of 21:35.45, which was seven seconds faster than Tsosie.

“I pretty much want to improve my times and my goal is to get as close as I can to the Zuni runner,” she said. “Compared to our last race I’ve cut (the gap down a lot.

“I want to be the district champion,” she added. “It doesn’t have to be this year because I still have two years.”

On the boys’ squad, junior Devin Lansing has been Navajo Prep’s most consistent runner.

“Devin is loud and proud but he gets the boys going,” Coon said. “He’s our yeller in practice, on the bus and at our races. He’s just our scout and he’s bubbly and very outgoing. He advocates for himself.

“He’s the one that’s constantly telling the boys ‘Come on we get to practice, we got to get warmed up and we got to do our drills,’” the Navajo Prep coach added. “He gets the ball rolling for us, and he does it for the boys and girls.”

Coon said Lansing has set some goals this season and she believes that he can achieve them.

“I have no doubt that he can do it,” she said. “And with him being a junior he’s only going to get stronger.”

And while she’s hoping for good things this season with both her squads, she doesn’t want to put any pressure on them.

“They’re really enthusiastic and even though I would like them to place at state I’m trying to be realistic,” she said. “I just want them to have fun this season because we didn’t have a season for two years. I just want them to enjoy it.”