Dedicated to running: Cross-country champ’s determination gets her to college

Despite the many setbacks caused by the COVID-19 pandemic, Jewels Leslie, New Mexico Class 3A cross-country state champion, refuses to let it stop her as she made a verbal commitment to run cross-country for New Mexico Highlands University.

“I feel like the pandemic has got in the way of a lot of things for a lot of people, but it really affected my chances of showing people my untapped potential and lowered my chances at a scholarship,” Jewels said.

“I chose New Mexico Highlands because it was the best fit and offer I had received,” she said. “It is near home, it has my major, and it is allowing me to run. So, I am very grateful to continue my education and run at the collegiate level.”

Jewels plans to take classes in medicine and become a pediatrician. She hopes to return to the Navajo Nation one day and help people with her new degree.

It has been a difficult year for her, according to her mother, Barbara Leslie. One of the things Jewels enjoyed most about sports was spending time with her friends and teammates. Now with schools closed and classes online, Jewels has been running on her own ever since.

“Even through many hardships and obstacles, anyone can achieve their goals in life,” Barbara said. “These kinds of experiences pave the way to major comebacks.

“Her hard work, determination and dedication paid off when she won the New Mexico state title in cross-country,” she said. “She set her mind on becoming a state champion at a very young age.” 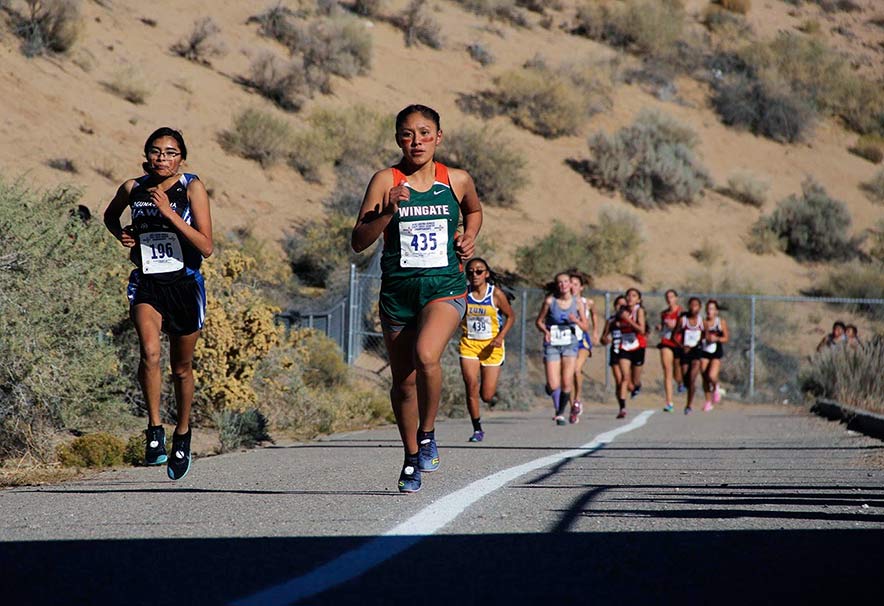 Barbara still remembers the day when Jewels came home from school and asked her parents if she can run cross-country. Although hesitant, thinking she was too small, they gave their consent.

Thinking back on that moment when Jewels was in second grade and who is now a future collegiate runner brings tears to Barbara’s eyes.

“I believe that it (sports) helped her to be more outgoing and be a positive role model,” Barbara said. “She is very determined and works hard to accomplish what she sets her mind to. She’s very outspoken now, but was very isolated before. Sports helped her be more well-rounded.”

Jewels stands out for her determination and maintaining straight A’s during her high school career, something she is most proud of. She runs in cross-country, track & field and plays basketball as well.

Ever since the start of her high school years, she had to work through injuries as she made her way towards her goal.

“In my freshman year I had a stress fracture so I only participated in two races and I was still recovering during track,” Jewels said. “My sophomore year, I had unexplainable issues regarding sharp pains in my calf muscles so I was in a healing process through cross-country.

“Track was the beginning of the relief of my pain,” she said. “Cross-country my junior year was the only time I really ever got the chance to run at the best of my ability.”

Despite the pain and hardship, Jewels didn’t let it stop her, not for sports or academics. When she needed medical attention for her injuries, she didn’t want appointments on school days. She didn’t want to miss a day of school and ruin her 4.0 GPA, something she worked just as hard at getting as her state title.

When she would run in competitions, Jewels would wear red paint on her cheeks. Red is considered sacred and a medicine that protects her as she runs. Jewel’s late grandmother, who first made the paint for Jewels when she began running, started this practice.

“I believe running has always been a part of the culture and I feel like it’s a part of who I am,” Jewels said. “I strongly believe in running before sunrise and praying to the holy people for good blessings.”

Jewels credits her family and culture for helping her along the journey as they provided her with the drive to succeed and her sense of identity.

In addition, she also likes to thank the organization Truth-Spin, LLC, an organization that helps student-athletes choose and apply for colleges and scholarships.

With Jewels to graduate from Wingate High this spring, she will continue on her journey to a higher education and to show her true skills as she runs again – not letting injuries or a pandemic get in her way.

“Honestly, I’m not mentally ready to accept that she’s a senior and that she’ll be graduating soon,” Barbara said. “I guess due to the pandemic I feel she didn’t have the opportunity to prove that she is a very capable and successful athlete.

“She has overcome so much in life,” she said. “Her motivation to get through tough life situations. Never allowing her struggles, challenges and pain to break her determination.

“I have always told her to remember where you come from when you’re out there accomplishing your dreams and for her to come back and help your Dine people,” Barbara said. “Be a role model, make wise decisions and most of all, be a kind person.”