Despite having only two state qualifiers the Navajo Pine track team did not go home empty-handed.

Kee reached the podium three times, including a first-place finish in the 3200-meter run. Kee won that race in 10 minutes, 5.96 seconds as he outkicked Penasco’s Gilbert Valdez by nearly three seconds.

“I’m proud of myself that I won the two-mile,” said Kee, who led for most of the race. 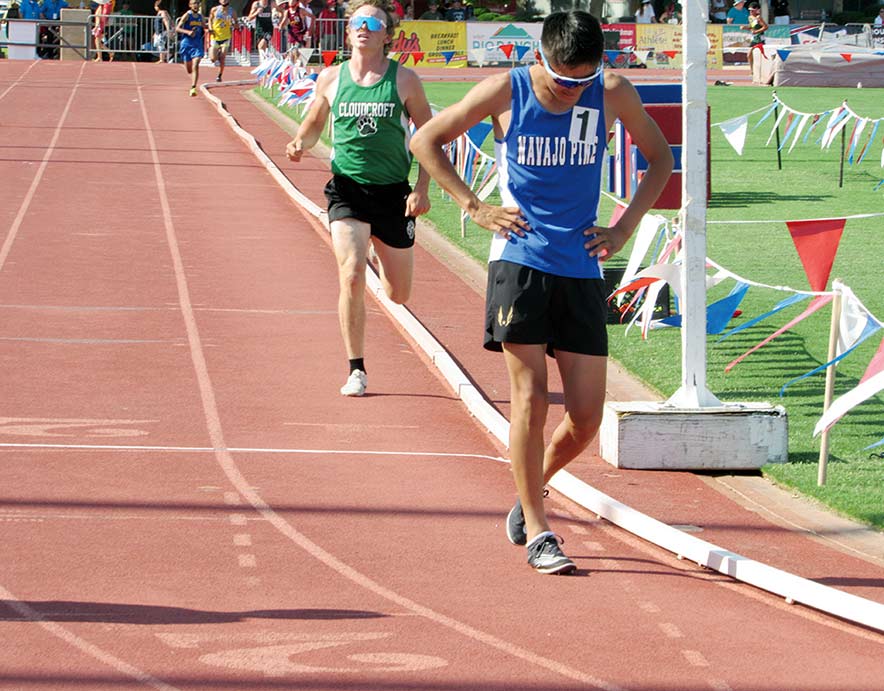 In the final lap, Valdez briefly took the lead but in the last 300 meters Kee found another gear to outlast the Penasco runner.

His older brother, Burlander, finished one spot ahead of him in the one-mile race as he was not expected to place.

Going into the race, Burlander was seeded 10th while Ryan had posted the second fastest time.

That pep talk worked liked a charm as Burlander stayed in contention for a state medal.

“I stayed with the lead pack,” he said. “In the last lap I had one guy pass me. I’m surprised with how I finished but I just felt better for the 1600.”

Navajo Pine coach Kyleigh Thompson said she was super proud with how her athletes did, especially with Burlander’s third place finish.

“We didn’t expect that because he was seeded 10th,” Thompson said of her pupil. “He ran a really good race and he set a really great PR.”

With the state meet being a one-day meet and on a rolling schedule, Thompson said the format didn’t bode well for multi-qualifiers like Ryan, as he had his eye at winning a Triple Crown.

It also didn’t help that the athletes were competing under sweltering conditions as the temperature reached nearly triple digits in Albuquerque.

“I think the heat got the best of us,” she said. “In the end, I think all these things hurt certain athletes. Not just us but as well as other teams and, you know, he still got three medals.”

And although he placed high expectations on himself, the Navajo Pine coach said Ryan should be very proud with what he accomplished.

“He finished top five in three events and that’s good for a freshman,” she said. “He should be really proud of himself for accomplishing that.”