Anna Huizinga had a painful exit at the last state track meet two years ago.

The Rehoboth sprinter had won two state titles at the 2019 finals, but she had to tearfully give them back due to a technicality on the second day of the two-day state meet.

“I cried for that entire day because I worked really hard,” Huizinga said. “I felt like crap afterwards, and to just give them up was pretty hard. It felt like I never ran it, even though I put the effort in.” 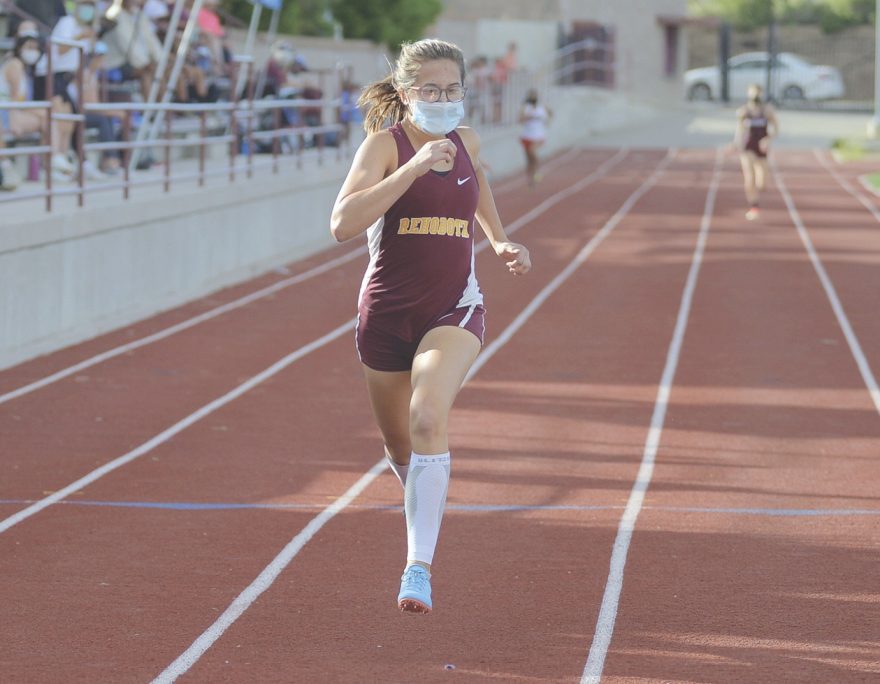 Navajo Times | Donovan Quintero
Rehoboth junior Anna Huizinga set the school record in the open 400 at the district meet on June 10 at Ramah High School with a time of 1:01.44. Huizinga is looking to gain back what she lost two years ago at the New Mexico Class 2A state meet when she was disqualified in all of her events due to a technicality.

That May, Huizinga had qualified in multiple events for the Class 2A state meet and after setting a school record with a first-place win in the 800-meter run it was discovered that she was over the limit with the number of races she’s allowed to enter in races longer than 400 meters.

Due to her disqualification, Huizinga does not own the 800-meter school record.

“That was my fault,” Rehoboth coach Collier Kempton said. “I came from Colorado and New Mexico has a bylaw that limits the number of events an athlete can compete in over 400 meters or longer.”

Kempton said he’s not a huge fan of that rule and as a result Huizinga was disqualified from all the races she entered during that state meet.

With Huizinga’s disqualification, the Rehoboth team had to scratch two relay races that qualified for the state finals.

“I feel like that punishment did not fit the crime,” Kempton said.

Huizinga agreed while adding that the disqualifications hurt the Lynx chances at a team trophy.

“If I didn’t get disqualified, I think our relay races would have done well,” Huizinga said. “Rehoboth has never once won a state (team) title for track and field.”

More than anything, the Rehoboth junior would like to get everything that she’s worked for back.

Last Thursday, Huizinga got the school record in the 400 meters as she captured gold at the district meet with a 1:01.44 effort at Ramah High School.

Admittedly, the Rehoboth speedster didn’t expect to set the school record in the 400 since she only ran the 800 and 1,600 in previous years.

“This year I got put in the open 400 and I did surprisingly well,” she said, while adding that her younger sister Audrey was also eyeing that school record as the eighth grader set a PR of 1:01.65 earlier this year.

“She was .04 off the record, the first time she ran it,” Huizinga said. “We get to compete with each other at state, which is really great because she’s someone that I love and care about very deeply.”

This will be the sisters’ last state meet in New Mexico, as the family is set to move to Michigan later this summer.

“I’m going to miss all my friends and, you know, I have such great teammates,” she said. “We have such an amazing team that is super positive and uplifting. It’s such a blessing to be able to run with them every single day.”

As a team, Rehoboth earned 27 qualifications for Friday’s 2A state meet, which will be held at the University of New Mexico Track-Soccer Complex.

Rehoboth has posted the fastest times in eight events including four relay teams.

“We have a fairly small team but I would say that the biggest strength of our girls is really just the camaraderie,” Kempton said. “We have a bunch of girls that just really like working together and because of that we don’t really separate out into a bunch of different groups.”

Since taking over the program three years ago, Kempton said a handful of his girls have done a great job of developing strength and that has translated really well with them running in the 200- and 400-meter races.

“We also got some girls that can run a little bit longer than that, at maximal effort,” he said. “We got some short sprinters that are young, who maybe can’t handle the load in what it takes to do long sprinting but they fit well with short sprints.”

When asked about the prospect of a team trophy, Kempton said the one-day meet does not favor his team since the recovery time between each races is fairly small.

Nonetheless, he said there are a number of girls that could win state as individuals. He also added that he expects his relay teams to be solid competitors.

With the current format, the Rehoboth coach said the state meet is going to be a slugfest.