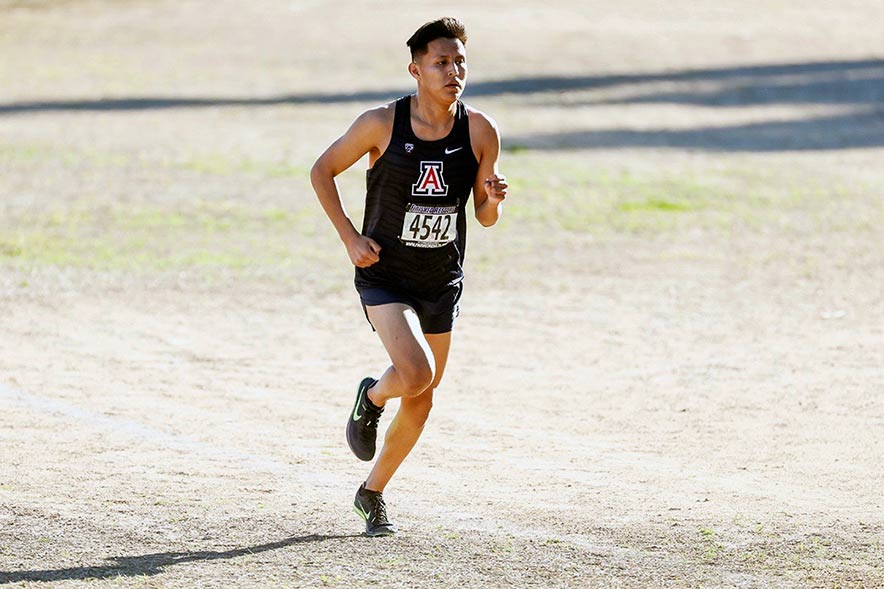 “Hi Mom, hi Dad!” Galvin says to his parents Alvin Curley Sr. and Bernice Bia-Curley. “Thanks for everything!”

Galvin Curley is a college freshman from Navajo, New Mexico. He graduated from Navajo Pine High School. He is a two-time 2A Cross Country Individual State Champion, a three-time 2A Team State Champion, the 3200m state record holder, the 2019-2020 New Mexico Gatorade Runner of the Year, two-time Navajo Times Runner of the Year, and was one of the top New Mexico finishers at the Nike Cross Nationals Southwest Regional Championships.

Growing up in the Navajo Nation, Curley says his family has always been the source of his inspiration. From his parents down to his youngest sibling, he always thinks of them when he runs and now when he is at college.

“I saw them go through a lot of stuff as a kid,” Curley said. “It gives me a lot of inspiration to hopefully one day give back to them. My family is definitely my biggest inspiration.”

He graduated from high school in 2020 and has moved to Tucson, where he is now attending the University of Arizona.

Being such a skillful runner, he had many colleges to choose from, but he ultimately decided on UofA after meeting and talking with the coaches.

“My coach really welcomed me with open arms and really told me a lot of things that made me believe in myself,” Curley said. “He told me what I could achieve. He gave me the self-confidence in myself to believe I could achieve those goals I made.”

The coach who spoke to him is the now-retired James Li. Curley is currently being tutored by coach Bernard Lagat.

Curley’s goals include being a good leader and a good role model for his young siblings and other potential Native students who will go to college. He hopes to become team captain one day, get an NCAA title, be an All-American and get top 5 in a pack 12 Championship Race. He also hopes to further his running career after college.

“Running definitely taught me some skills,” Curley said. “When you start to win, people start to look up to you, and that is a big responsibility. You have to learn how to be respectful and responsible at all times because there are people who look up to you. My high school teammates and coaches always told me to act right and be respectful because when I am running back at home, there are a lot of little kids who follow me once in a while, and I think that comes with a big responsibility of being very nice and respectful to everyone.”

In January Curley was out for a run when he accidently stumbled in an unseen pothole. His ankle was twisted and the muscle was sprained. It took him a while to heal. While he was resting, it was then he realized how much he loved the sport.

“It kind of sucked, but when I was injured I realized how much I liked running so that gave a little more confidence to run,” he said.

He was barely back on his feet when he ran his first race for the University at the Arizona Invitational in February. There he came in 10th place overall and helped his team get second place in the 8K race.

“There is a big difference between high school and collegiate running, and I learned that the hard way. It was a big learning experience for me,” Curley said. “Runners are much faster, stronger, and smarter on the collegiate level. So, you learn, and then every race becomes tactical. You have to be a smart runner overall to have a good performance. The main thing for me is to get stronger so I can hopefully one day be at the top of our conference.”

At his next race in the Dave Murray Invitational, he came in 33rd place in the 8K run, but he’s confident that when his team runs in the PAC-12 Cross Country Championship tomorrow (Friday), he will be ready for it.

“Winning to me just gives you a good feeling of knowing your hard work paid off,” Curley said. “Winning represents how hard you have worked. It just feels good. I’d rather win as a team because it feels better to see everyone celebrate as one. That’s my main goal as a teammate is to hopefully be a leader for UofA and lead us to a conference champion or an NCAA title. But my main goals are to be a good teammate and a good leader, no matter if I am the slowest or fastest runner.”

On the scholastic side of things, Curley is enjoying his time at college thus far. His online classes are keeping him busy as he studies physiology and medical science.

“College has been really fun, a new experience for me,” he said. “I am learning a lot. I am still trying to adjust to moving from, like, the middle of nowhere to the city. Just adjusting, but other than that, I’ve just been learning as I go, taking a lot of risks and making sure I make the right decisions. So far, everything has been going great.”

The COVID-19 pandemic changed what Curley had imagined college would be like for him. Early last year, he planned to take a tour of Tucson because he had never been there before. But the tours were canceled, and he had to learn the layout of the college after his arrival on his own.

Taking online courses and following procedures against COVID at practice wasn’t what he was expecting, but he takes it all with good grace. Regardless of the safety measures, he recognizes the opportunity running has given him, and he is determined not to let it go to waste.

“I think my biggest achievement would be running for UofA, because not many Native kids are blessed to run at a divisional level,” Curley said. “I try to be the hardest worker every day because this was something I really wished and prayed for, and so now I make sure I work hard so I can stay here until I graduate.”

Curley will continue practicing, studying, and working hard to achieve his dreams to give back to his family and his people one day. He hopes to see other Native kids join him and that those in high school will make it their goal to go to college.

“I just want to say, make sure you kids are working hard and paying attention in school,” Curley said. “Learn time management because that is the most important thing in college. Being a student-athlete, I am still learning that.”