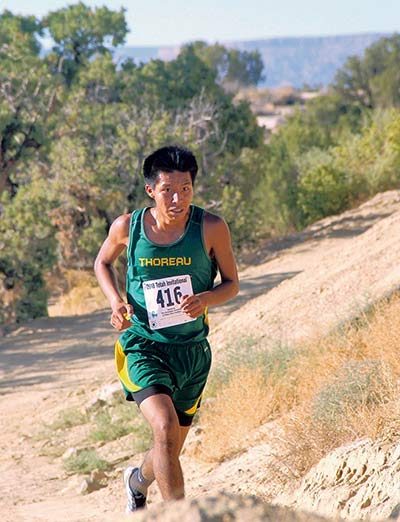 Thoreau High School senior Dallen Plummer approaches the finish line of the Totah XC Invitational held Sept. 21 in Farmington. Plummer finished second in a time of 19:15.69. It was his first time running the race held by Piedra Vista High School.

Dallen Plummer showed up at the Totah XC Invitational ready for a challenge.

The Thoreau High School senior had a decent start to his final cross-country season and continued to run well into the regular season. He finished second at the meet hosted by Piedra Vista High School on Friday in a time of 19:15.69.

He said it was a challenge but one he was willing to accept.

“My times have been decreasing and I’m getting faster this year,” he said. “It’s a challenge — the hill, the sand — it’s a challenge.”

Plummer was one of just over a hundred runners to compete in the varsity race held near Piñon Hill Community Church in Farmington. It was a new location, different from the one typically held near Lions Wilderness Park.

The course included some hills and sandy areas that most participants found challenging.

Plummer said he was fairly prepared for the hills but the sand came as a bit of a surprise.

“I do hills but not the sandy part,” he said.

Plummer had a strong start, just behind leader Kirtland Central High School senior Kashon Harrison. He said he started just behind Harrison until Harrison broke further away from the pack. Harrison finished first in a time of 18:17.31.

When he realized there was no catching up to Harrison, he said he focused on his own race.

“I just opened up my stride and kept it up,” Plummer said. “Once I got out of the sand, it’s the last hill so I tried to run the hill fast. I kept on extending my speed.”

Though he finished in second, Plummer said he was happy with his finish as it demonstrated the improvements he’s made this season.

Second-place finisher for the girls, Shiprock senior Khadija Lapahie also had a content finish in a time of 23:46.36. She finished behind Kirtland Central’s Aisha Ramone who clocked a time of 23:29.01.

Lapahie said she had a slightly rough start but was able to make up for it in the end.

She said she held the lead up until the bottom of the first big hill before settling in to the second position.

“I felt like I started off a little too quick knowing that we had pretty tough hills to run,” Lapahie said. “I felt like I was running out of breath, I was trying to catch my breath. My whole plan was to stay with her (whoever the top runner was going to be), and not let her get too far away.”