Shiprock Marathon back to full capacity after COVID 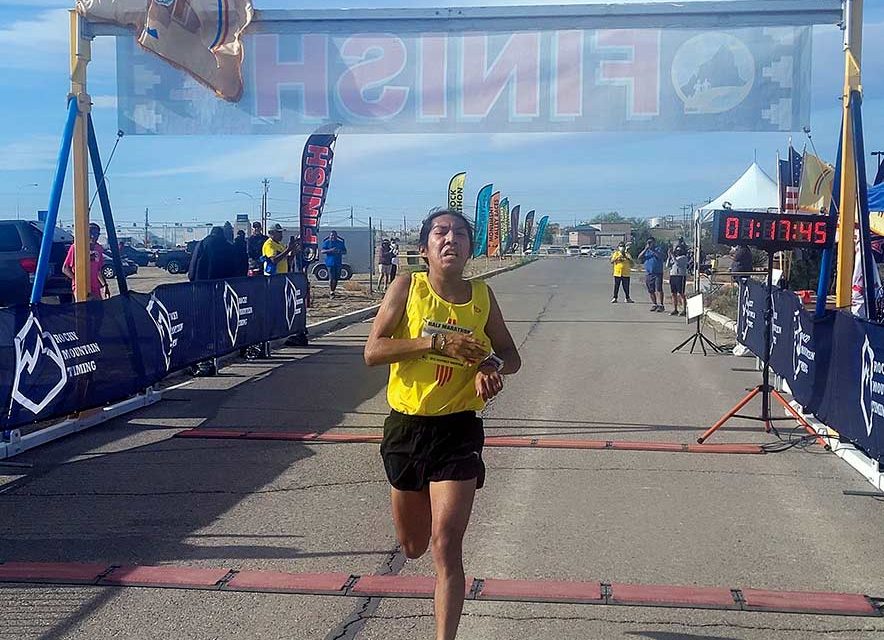 Navajo Times | David Smith
Brandon Joe is the first to cross the finish line; the Deming High XC coach finished the Shiprock Half-Marathon with a time of 1:17:45.

After nearly two years, the oldest and most famous marathon held in the Navajo Nation breathes again.

Because of the COVID-19 pandemic, the race has been canceled due to safety concerns. The organizers, NavajoYes, held virtual races during that time, but nothing beats the real thing.

The crowd dispersed just as quickly as soon as runners finished the race.

Traditionally, runners would ride a bus to the starting point near Shiprock and run back into town. This year, the runners started from the Shiprock Youth Complex and ran to a certain point (whether they were in the half or full marathon), before coming back on the same route.

The different route was challenging as runners had to run up an incline and rolling hills before the road smoothed out. It was a warm morning when the race began at 7 a.m., the predicted high winds not starting until the afternoon when many runners had finished.

In addition to the race, various singers and performers brought live entertainment. Special guests included Buu Van Nygren, a candidate for the upcoming Navajo Nation President election, and Bearsun, the suit worn by Jessy Larios of Los Angeles, which ran with the children in the mini kids’ race.

The first person to cross the finish line was Brandon Joe, the cross-country coach for Deming High, finishing the half-marathon at 1:17:44.26.

“Everything that was put together was very well,” Joe said, “I’m glad that the Nation brought back the race since the whole pandemic.”

This was Joe’s second time running in the marathon, the first time being in 2019. This year, he said the new course offered more challenges, but he was determined to come in first place for the half this year.

He ran across the finish line to the cheer of his family, who welcomed him with hugs. He was only disappointed that he didn’t beat his personal best, two minutes less than his final result.

Joe is preparing for the Duke City Marathon next and moving to Flagstaff soon, saying the higher elevation will help with his training. He said it felt great running in a live marathon again, especially in his hometown.

“I dedicate this run to my students in the classroom, my family, and everyone,” Joe said. 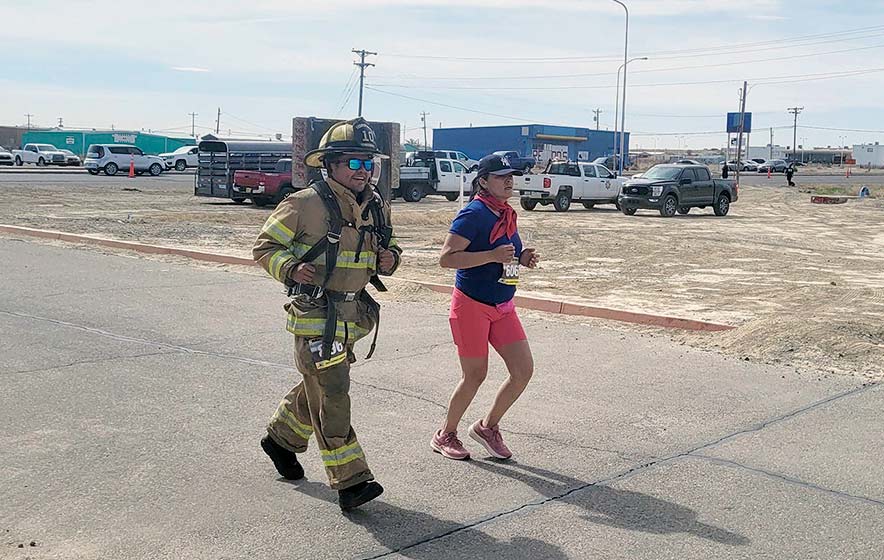 Navajo Times | David Smith
Jeremy Curley from the Window Rock Fire Station runs in full gear to bring awareness of Firefighter suicide in the nation and also show support for his fellow firefighters.

Many runners ran for different reasons and causes.

One person who stood out was Diné firefighter Jeremy Curley from the Window Rock Fire Station. He completed the half marathon at 2:45:31.26 while wearing his full firefighter gear.

“Just to keep awareness up, especially with firefighters suicide in the Nation,” Curley said. “So, just giving awareness and going out and helping everybody out, pepping up the runners, motivating them.

“That’s what I’ve been doing this whole time; this is probably my fifth year running in full gear,” he said.

Curley also helped carry an American flag throughout the race, gaining cheers whenever he passed.

Curley believes his performance could have been better, but he wasn’t counting on the hills near the start and the strong winds that would push against the flag, and the heat from his suit. However, he kept telling himself, “This is nothing,” as he remembered he was mountain hiking only a few weeks earlier.

“Everybody be safe out there, have fun, stay motivated and stay fit,” Curley said. “Try to eat healthy; I know we have a lot of temptation out there, but just get out and run, jog or walk.”

A few minutes earlier, the first place runner for the full marathon was Timberlin Henderson, a local coming in at 2:38:38.90.

Despite being from Fruitland, this is his first time running in the Shiprock Marathon. He is an ultra-runner, more used to rural courses, but he was excited to run this race and thanked the organizers for keeping everyone safe, especially with the ongoing traffic.

“It feels good,” Henderson said. “I was not expecting that. I was just trying to get out here and have fun. And I did. It was really nice, I like how it wasn’t as windy as I was expecting, and so that was a plus.”

Henderson has been running ultras since 2016; his goal for this race was to finish under three hours, which he accomplished.

He said the race was done safely with COVID procedures being followed, everyone keeping a safe distance from one another and that it was a fun experience overall.

“Honestly, just want to say for the Native youth out there, just continue to enjoy the journey,” Henderson said. “Get outside and enjoy the environment around you and stay positive.”