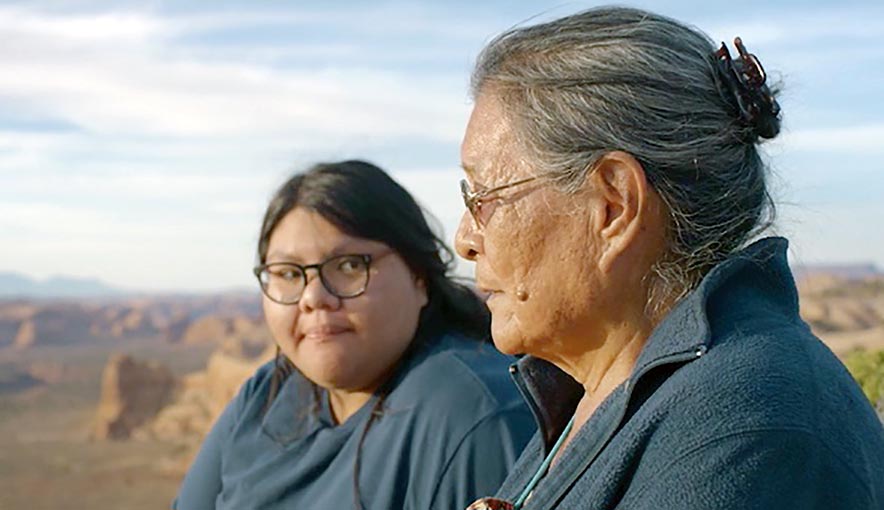 As characters in the new documentary “Scenes from the Glittering World,” directed by Utah filmmaker Jared Jakins, three real-life Navajo Mountain High students learned that voicing their worries, hopes, and dreams can ease the angst of being a teenager and empower them to create their destiny.

Filmed in 2019, the coming-of-age story, which premiers on PBS on May 16 as part of the Independent Lens series, chronicles the journeys of Diné students Granite Sloan, Ilii “El” Neang, and Noah Begay as they navigate social and academic pressures while staying connected to their rural homelands, family and culture.

Against the backdrop of the vast Naatsis’áán landscape, with red rock formations, mountains, and canyons, the film follows the students through the ups and downs of daily life as a high school student in a remote area.

Granite, a grief-stricken freshman, struggles to find purpose and peace following the unexpected death of his younger brother while pursuing the dream of becoming an athlete with limited opportunities to do so.

Freshman Ilii, who moved back to Navajo Mountain from Las Vegas, is unsure if her community will accept her queerness and questions whether her desire to become an artist exceeds her skill.

Noah, a senior, being raised by his loving grandparents but distraught over his father’s detachment, is faced with focusing his time on video games or doing his homework to graduate.

“The film’s three central figures are at times quiet, introspective, often hilarious, still unsure of what they want and why,” said Jakins.

“As a director, I was drawn to their humor and their youthful melancholy,” he said, “but ultimately, their understated but remarkable frankness inspired me to collaborate closely with them in crafting this film.”

Forging their own path 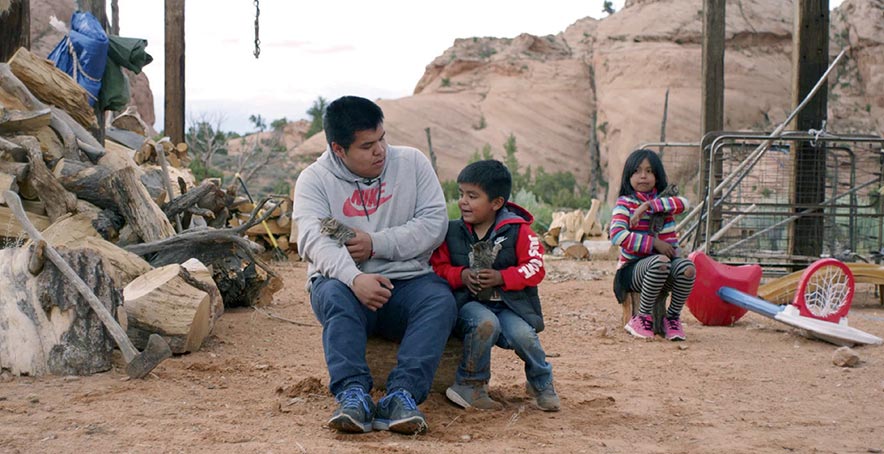 Film still | Jared Jakins
Noah enjoys a playful moment with his siblings at their homestead in Navajo Mountain.

Granite, Ilii, and Noah became active in “forging their own representations” and their path, which ultimately determines the course of the film, said Jakins.

“The result is a spectrum of vibrant familial life and carefully observed moments of catharsis,” said Jakins. “Our aim was to provide an intimate and lasting contemporary portrait of these beautiful and resilient young people.”

Captured by Jakins’ artful lens, the intimate connection of the characters to their lands and kin sets the stage for emotional breakthroughs and transformation and lays the groundwork for healing.

By bravely opening up on camera, the three students found their voices in many ways.

With the permission of Naatsis’áán Chapter officials, Jakins spent about six months at Navajo Mountain High, focusing on its exceptional robotics team and getting to know students and their families.

At the time, Noah agreed to help Jakins and his film crew by being a guide to the community and landscape.

“He was really confident,” said Jakins. “Everyone knew Noah and respected him.”

Jakins said when they learned that Noah was struggling and wanted to improve his relationship with his dad, they asked him if he would like to be part of the film.

“I think Noah was just taken aback by how when he would talk, we would listen,” said Jakins. “We said, how can we help facilitate that, and is there a way we could make that part of your story in the movie?”

This ultimately led Noah and his father Jonah to agree to meet in a particular canyon side spot near Inscription House to talk on camera.

“It wasn’t scripted, but I like to think of it as together, collectively, we set the stage for something to happen, and I would just be there with the camera to capture it,” said Jakins.

What ensues is a frank and profoundly moving conversation that leads to understanding, compassion, and a path to forgiveness between the young Noah and his dad, who had been suffering a silent pain and loneliness.

“I think it helped me a lot,” said Noah.

Jakins said for Noah, choosing how he would appear in the film ultimately led him to realize that he could create the outcomes that in life he desired.

“Noah realized, ‘I can change my life. I can change things right now and graduate. I can talk to my Dad,’” said Jakins. “I think it was empowering.”

Similarly, Ilii shared with Jakins some thoughts on her identity.

“She knew she was LGBTQ in some nature, but she wasn’t really sure,” said Jakins. “We just wanted to be really careful that we respected El’s feelings and her own natural development and understanding of herself.”

Ilii suggested they film her with her grandmother Avis Begay, who she had wanted to talk to about the issues on her mind.

As with Noah and his dad, turning the camera on the interaction between El and her grandmother led to a breakthrough and discovery for Ilii as she hesitantly asked her traditional grandmother what she thought about two-spirited individuals in Navajo history.

“It was a hush-hush,” said Avis. “Nobody talked about it.”

Shot at sunset, the intimate dialogue between the two juxtaposed against the beauty of the Navajo landscape leaves the viewer breathless with anticipation.

As her grandmother thoughtfully advises Ilii that she should live the way she wants to, a palpable sense of relief and streaming tears wash over Ilii.

“People are gifted in certain ways,” said Avis. “Everybody still loves you. Family is family.”

Jakins says much of the film asks, “How can we heal when we connect with the land?”

“One of my favorite shots in the film is when Granite is laying on top of a mesa just looking up at the clouds,” said Jakins.

“That comes after a scene where a Navajo teacher is telling them how the land never forgets, and the land remembers your footsteps, carries your blood, but it can also heal you,” he said.

At the end of the film, in a scene set on a red rock slope, Granite and his friend Daesha talk about past traumas they have experienced and how they’ve coped with them, the complexity of life on the rez is presented as unresolvable at times.

“All you got to do when something tragic happens is just live with it,” says Granite, referring to the loss of his brother.

Granite says that acceptance came through the process of sharing his story and filming it, whereas prior, it had all been bottled up inside.

“After expressing it, I just felt a lot better,” he said. “You know, talking about it.”

Since filming “Scenes from a Glittering World,” Granite transferred to Tuba City High, where he played football and graduated this month.

Inspired by the experience of making the documentary, Granite has decided he wants to pursue filmmaking himself and has the opportunity to do so.

“When we were filming with Jared, I learned a lot of new things,” he said. “It was actually fun and enjoyable. After I graduate, I’m planning on working with Jared and his crew.”

Ilii is graduating from Navajo Mountain High on a high note with a stellar academic performance.

“I’m actually the second person with the highest GPA,” she said.

She plans on finding a job in Las Vegas while still pursuing her artwork.

“I’m getting better and still aiming to improve,” she said.
Ilii said the film positively impacted her and allowed her to feel comfortable with who she is, which she wasn’t sure was possible before that.

“In all honesty, it did help me break out of my shell a little,” she said.

Noah, who graduated in 2019, went on to work in construction, but when COVID-19 arrived, the work dried up, and he returned to family duties.

“I came home to my grandparents, and I’ve been taking care of them ever since,” he said.

He also cares for the horses, donkeys, and sheep and enjoys hiking and camping trips in his homeland.

Given the opportunity, Noah said he wouldn’t mind being on a film crew again.

“It was a good learning experience,” he said.

In the meantime, the bond between him and his dad grows only stronger over time.