Joaquin Billy has been a steady scorer for the Magdalena boys’ track team. 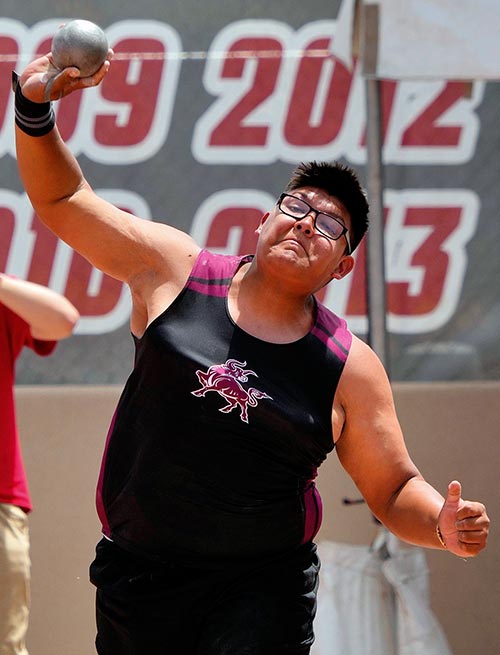 The Diné athlete was one of 15 state qualifiers representing the Magdalena team at the New Mexico Class 1A state track meet.

Billy did his part and helped secure the Steers another state title as he captured gold in the discus and shot put events.

“This is pretty exciting,” Billy said of his exploits. “I accomplished a lot this season.”

He racked up 14 of Magdalena’s 90 points with his two individual state titles as the Steers won comfortably over second-place Fort Sumner. The Foxes took second with 64 points.

“What he does is huge for our program,” Magdalena track coach Sarah Sue Olney said of Billy. “I mean, we consistently count on his points for every track we’re at. To be honest, I don’t think he lost a track meet this year.

“Last year, he got second or third, but this year, he got first at every meet,” she added. “And for us, it’s just a guaranteed solid seven points every time he wins. If you figure out our point total, we can always bank on his coming in.”

Billy came into the state meet as the top seed for both of his events. He successfully defended his shot put crown with a 43-feet, 10-inch throw, hitting that mark on his third throw in the prelims.

“I actually had a lot of pressure going into this meet,” Billy said. “I’ve beaten a lot of people, and I wanted to keep that streak going.”

“That’s pretty cool that I got it out that far,” Billy said. “I put in a lot of practice, and my form was on point.”

Despite a target on his back, Olney said Billy handled the pressure of being the thrower to beat at this year’s state meet.

“He gets nervous just like everybody else, but he’s so fun and so goofy that it keeps him calm, and it keeps him ready to go,” she added. “He handles the pressure well, and if somebody throws farther than him, he’s determined to one up on them.”

With Billy planning to attend Western New Mexico University in the fall for welding school and not pursue athletics, Olney believes her pupil has the talent to compete at the next level.

“I honestly don’t think he’s tapped into what he’s very capable of,” she said. “I think he’s a diamond in the rough, and if anybody would open their eyes and look at this kid, I think he’s only going to get better. To be honest, I think he could compete at the next level.”