Attempts to reach Upshaw were unsuccessful at press time.

Last fall, Upshaw captured her second consecutive Arizona Division IV state cross-country title. The St. Michael senior turned in a dominating performance by covering the 5K-race at the Cave Creek Golf Course with a blistering time of 17 minutes, 49.5 seconds as she defended her state title.

“With it being my senior year I wanted to get into the 17s,” Upshaw said after win. “I think a lot of that was me pushing myself up in the front.” 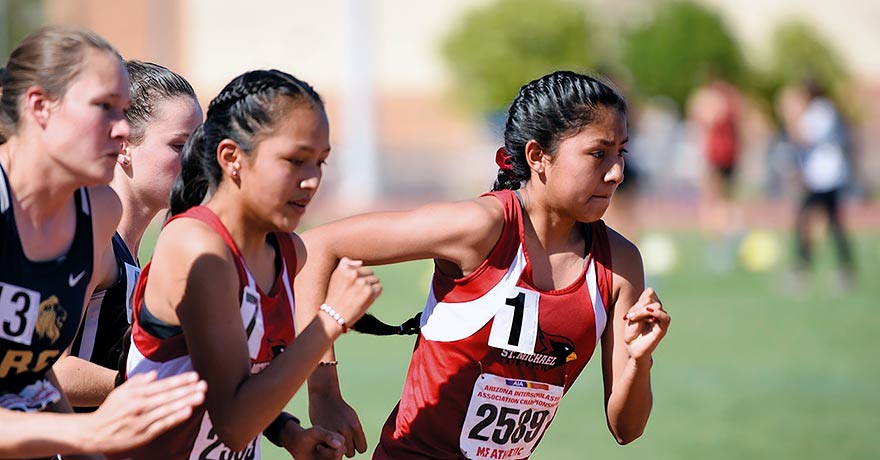 Upshaw won her race fairly easily with reserve champion Grace Tipton of North Phoenix Prep clocking in at 19:17.5, which was one minute and 28 seconds slower than the St. Michael runner.

“A lot of that has to do with ambition,” Upshaw said. “I love running and I really love the sport. As the season went on I just wanted more of that for myself.”

Last spring, Upshaw captured her first Triple Crown as she won gold in the 800-, 1600- and 3200-meter races during the Division IV state track meet.

St. Michael coach Kelly Bia said her daughter put a stamp on every race she took part in but her defining moment came in the 800.

“The 800 is a different race because it’s so quick and fast,” Bia said. “She’s not a speedster and that’s the race she’s most uncomfortable with.”

In her previous state meets, Bia said Upshaw placed sixth and seventh in the 800, and in retrospect she presumed that same scenario was going to play out after the first lap.

“In the back of my mind I was thinking here we go again,” Bia said. “But she stuck with it and with 300 meters to go she switched gears and she never looked back.

“I think this race tested her mentally and for her to come through I hope it shows her that she is getting stronger,” she added.