Part 2 in a Series

The way to tell a story in the Diné language is to paint it in one’s imagination as if you are actually there experiencing it, says Raymond Don Yellowman, president of Bodaway-Gap Chapter and founder of The Forgotten People.

He says one only needs to revisit the Diné Creation stories to find accounts of man’s greed and deception as well as times of crisis like the coronavirus outbreak.

“That’s all been experienced during the trials and tribulations in the Creation Story,” said Yellowman. “They say there’s nothing in this modern world could be presented or shared that would be foreign to that.”

From this perspective, life-changing events such as pandemics are just one of the many things we endure as human beings, he says. He suggests the Diné way of life itself, including the acquisition of livestock and living through K’e, may have come about as a result of survival experiences from the past.

“I think in this grand experiment we live in now, the modern world is not going to have all the answers or cover all the bases when we deal with trials and tribulations,” said Yellowman.

He believes as human beings we’re supposed to help each other and live in harmony with all living things. We have to remind ourselves that Mother Earth, Shima, is a living, breathing organism whom we depend on, says Yellowman. “She is going to go through a time of change,” he said. “Things like this will affect the people who live on the surface of the land.”

Yellowman says he’s heard elders tell the stories of a time when the earth was exploding with balls of fire due to volcanic activity. People didn’t that expect that to happen either, he said.

“These are acts of God,” he said. “The Creator brings these things.” Yellowman says there are lessons embedded in these events. “We, the people who are spiritual, believe there’s a reason for these things,” he said. “There’s a purpose.”

Yellowman suggests the coronavirus pandemic might be a wake up call that our present way of living is not sustainable and can’t continue indefinitely. When you live an a world that exploits Mother Nature where money and greed rules, there are bound to be consequences, he said.

“Maybe this is a reminder not to be so reliant on this modern world that we’ve become dependent on,” said Yellowman. “Maybe we should go back to the things that got us here, our land, our animals, growing, producing, and sharing through K’e.”

Yellowman suggests too many people have put all of their “eggs in one basket” by depending solely on the today’s economic system, which may offer a job and stable income, but not much protection in a crisis like this one. He believes times like this can serve as reminder to maintain a balance between the modern and traditional way of life, even though it might be hard work.

“Maybe something like this is what it takes to teach us,” he said. Yellowman says regardless it is the Diné way to focus on the positives and to continue to give offerings and prayers for guidance to get through these difficult times.

Overall, traditional Diné people do not live in fear, says Yellowman. “The Holy People are looking over us and looking out for our best interests and we’ll leave it up do them,” he said. 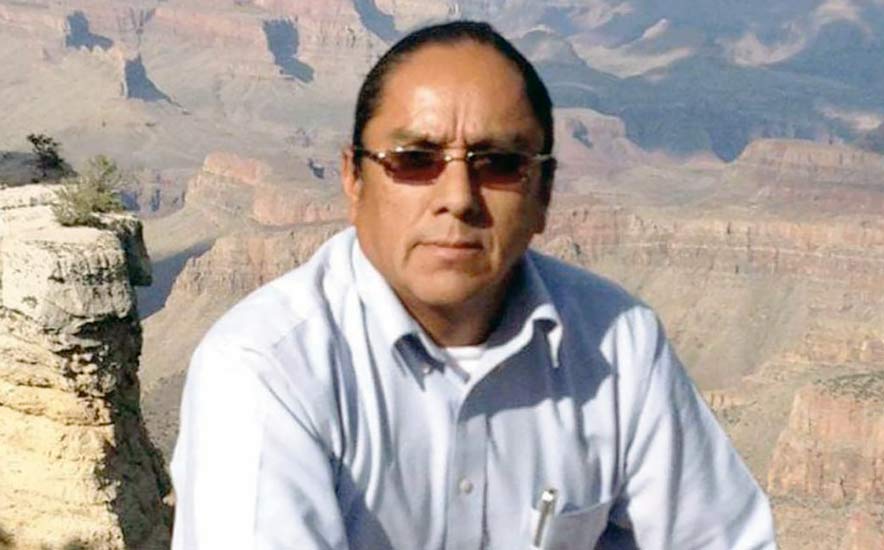 There are three major components that a community has to have in order to progress: good mental, spiritual and physical health, says Nahata Dzil Commissioner Darrell Tso. If you have that, it’s easy to move things forward and get things done for your people, he said.

“There are so many different ways we can approach this,” said Tso. “Many of us were fortunate enough to have people in our lives that shared our stories. We participated in ceremonies and were able to experience it and learn the knowledge.”

In early Diné teachings, four leaders were originally chosen and sent to the cardinal directions, said Tso. They came back with gifts and instructions, including white corn from the east, blue corn from the south, yellow corn from the west and multi-colored corn from the north.

Among the basic instructions for life, the people were told to rise early in the morning, run a distance toward the east, and shout while running to build endurance and strengthen the lungs. When you get to your destination, you do a prayer offering with your white corn, said Tso.

“We gather our thoughts and we pray into the early dawn and wait for a thin light to appear over the horizon,” described Tso. “It’s through that we pray into the outer darkness, the outer edge where the sacred people are, where the first star was sent to our Mother Earth and life was put within her before the sun was put in place.

“There, we remember the Holy People that exist in the early dawn and the gifts they give us,” said Tso. The running and prayer and the type of food we gather is the basis of our strength and our culture, he said. Tso said the teachings also told that if the people forget their cornfields, and forget to make offerings and give gratitude for the gifts in life, a day could come when things like this flu pandemic would be among us.

“These are the basics of our Navajo teachings,” said Tso. Unfortunately, many people don’t practice them anymore, he said. Tso points out that when you drive across Navajo there are a lot of empty cornfields with old fences. Irrigation ditches have never been fixed or cleaned up, said Tso.

“We’re forgetting the basic necessities, the basic teachings of who we are as Diné people,” he said. It’s also harder these days because Diné are fighting against outside influences, said Tso.

“Through discipline, we begin to understand who we are and where we come from, and we begin to value ourselves,” he said. Once we have that, says Tso, we can establish reverence and respect, and once you do it for yourself, then you can do it for others. “Remember your language, your songs, your prayers and that’s going to sustain you throughout your life and you will reap the greatest blessing of all life — old age,” he said. Tso stresses the importance taking care of your home fire, especially now. “Pay attention to the firewood you gather,” he said.

“Make sure it’s properly put together and properly lit. Those are the things you need to understand to attend to Nature’s Law.” Once you start taking care of your home fire, then your life will go better, he said. “Once you have order in your home, the blessings come,” said Tso.

For now, the simple discipline that has to happen is to stay home to contain the virus, said Tso. The idea of staying home and isolating is exactly what our forefathers taught, he said. He strongly advises avoiding unnecessary trips and visiting with others. “The virus only spreads if we move about,” said Tso. “If people stay put, the virus will stay put and it will stop spreading.”