Hopi comes back in a barnburner; Valley wins anyway

Consider this a lesson learned.

After smooth sailing in the opening set, Valley coach Julia Six rested her starting lineup in the next set as the Lady Pirates opened the floodgates for Hopi to push them to five sets. 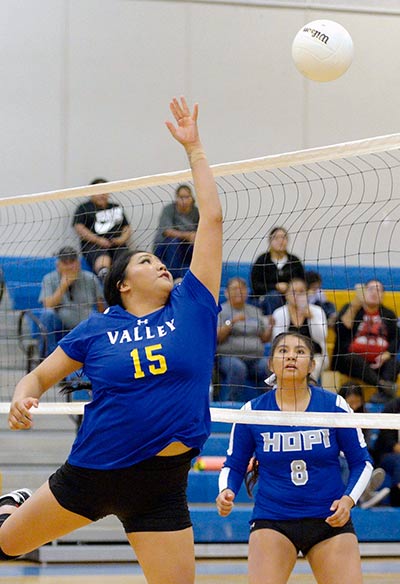 Valley middle hitter August Tallman attempts to hit the ball against the Hopi Lady Bruins. Valley surrendered a two-set lead before prevailing with a five-set win.

“My mistake tonight was resting some of my girls in the second set,” said Six, whose team was coming off a fourth-place finish in the gold bracket at the Rehoboth Invitational. “It was hard for them to come back and finish out the game.”

With her second-string players holding their own in the second set, the Valley coach figured they would close out Hopi in straight sets with her starters back in the lineup at the start of the next set.

Things, however, took a drastic turn in the following three sets as Hopi turned the tables. The Bruins were more comfortable at the net as they put down 28 winners to stymie Valley.

“We were right there,” said Hopi coach Eva Bahnimptewa, who started her eighth season with the Lady Bruins. “We just made some tiny mistakes late in the game but it’s something we can work on.”

In those last three sets, Bahnimptewa implored her captains to open up the line of communication with the rest of the players on the court. In the first two sets, she said, her club was too quiet.

“Communication was a big key because in this game no one can read your minds,” she said. “I told them that they need to take control of this court by being passionate and be as loud as you can.”

She said if you do those things it really makes a difference no matter the talent level.

“I think you saw that in the last three sets when they came alive,” she said. “They pushed themselves, they encouraged each other; they didn’t give up on each other.”

With the momentum on their side in the third and fourth sets, Bahnimptewa was hoping to carry that into the fifth set. Nevertheless, both teams had their fans on their edge of their seats as this set teetered in both directions with seven ties and three lead changes.

Late in the game, though, Valley had a chance to put their coach at ease, leading 14-11. The Pirates, however, tossed in three consecutive errors as Hopi tied the set at 14-all.

“We made some mistakes,” Six said of their mental lapse. “We were not communicating.”

The set was tied for a seventh time at 15-all with both teams throwing in a service error. In the next rally, Hopi gifted Valley the point with a net error and the Pirates sealed the deal with a service ace from sophomore Taylor LaMotte.

“It’s good for the school and it’s good for the girls,” Six said of her team pulling off the win. “I hope that we can keep winning and work on our mistakes and really work with our communication. I think that’s going to get us through this season. We just need to trust in one another.”