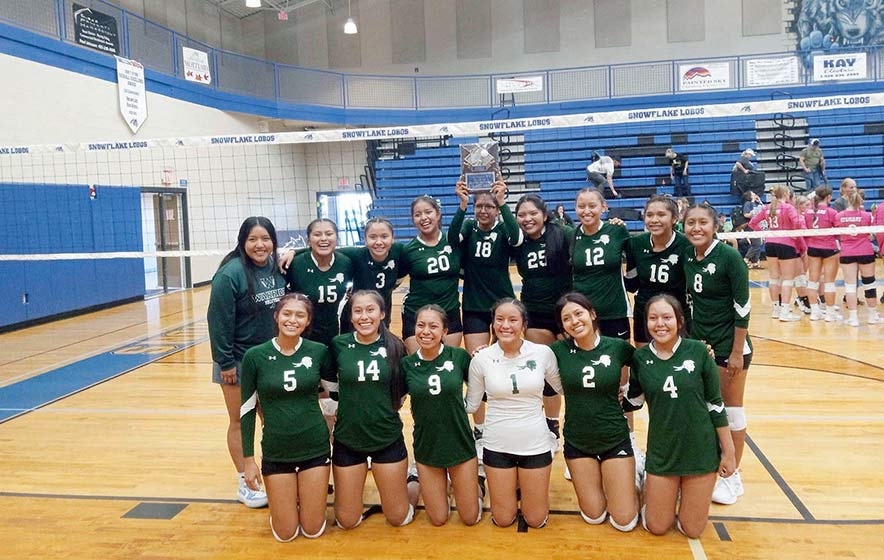 The Tuba City Lady Warriors got the start they wanted in a one-set, winner-take-all match to claim the silver championship trophy on Saturday at the Snowflake “Be Like Nat” Invitational.

Tuba City opened up a 6-0 cushion over the Show Low Lady Cougars and the Lady Warriors extended that margin to as much as seven points before Show Low came storming back.

The Cougars got as close as 16-14, but Tuba scored five straight to regain the momentum before winning 25-20.

“I think we finally figured them out,” Tuba City coach Brittney Laughter said of Show Low. “We did see them earlier this morning, and so we changed up our hitters for this game. We utilized everyone, so it worked out for us.”

Laughter said the team’s floor coverage was exceptional and that may have frustrated the Show Low squad.

“We played great defense,” she said. “We had great coverage, and they were covering for each other.”

Tuba City outside hitter Lyrissa George delivered the game-winning kill, getting the ball to bounce off a couple of Show Low blockers.

“This game was very nerve-wracking,” she said. “I knew that I had to aim for their hands because the whole game they weren’t really pressing with their blocks, so I knew I had to hit (the ball) on top and I just hit the ball as hard as I can.”

As the silver champion, George said, this is going to help with confidence for the veteran Tuba City squad.

“Winning this shows what we’re capable of,” she said. “It shows how much we can accomplish if we communicate as a team.”

“This is very exciting,” senior outside hitter Ellyce Begay chimed in. “Last year we did get into the gold bracket, but we lost out. Even though we won the silver bracket, I’m just happy that we won together as a team. We actually won a plaque, which is nice.”

Senior libero Alaina Dugi said the silver championship game was one of the best matches they played during the 16-team, two-day tournament.

“I would say our best match would be probably ALA,” Dugi said of the squad from Queen Creek, Arizona. “They have some good hitters on that team.

“Throughout the whole game we just communicated,” she said. “I was really amazed in the way we played. That match was a lot of fun.”

That match took place in pool play action as Tuba City finished third behind ALA-Queen Creek and Winslow. The Warriors did finish ahead of Chinle.

“We had a great game with ALA,” the Tuba City coach said. “We stayed up with them, which was what I was looking for. I wanted the girls to see that they can be compete with higher teams like that.”

Laughter said this year’s squad is made up of 11 seniors. Of those players, six are returners from last year’s squad.

“We have a strong squad but we definitely have room for improvements,” Laughter said, while adding that her squad is very unpredictable.

“I mean, we had some good games here and then we had some bad games,” she said. “It’s up and down, but I’m fine with that. I believe our veterans have some time to step up.

“Not that they haven’t, but I don’t see them struggling,” she added. “They’re carrying the team and they’re showing that through their leadership.”

Laughter said the team chemistry will not be an issue as most of her kids have played together for quite some time.

“Everybody gets along well,” she said. “It’s helping us right now, so I feel pretty good about that.”

Begay said that chemistry was present in its season opener with Snowflake late last month.

“When we played them we just kind of clicked with one another right away,” she said. “Everyone on this team has a role on this team and we’re all working together to be the best we can be.

“The people on the bench plays a role too,” she added. “They’re cheering for us and that keeps us going. It helps us on the court, and it helps us mentally.”

Looking at the 3A North Region, Laughter said the conference race is up for grabs this season. Last season, her squad took second behind a senior-heavy MV squad.

“You know the region is always unpredictable,” she said. “There is room for improvement for everybody. I’m not going to single anybody out, but I do feel like my team is strong.”

As for postseason aspirations, Begay said the entire squad wants to make a deep run in the 3A state tournament. And although they don’t have a power hitter, she said it’s going to take a team effort.

“I think our team is pretty good,” she said. “We’re very competitive even though we don’t have like hard hitters. We have some that can block and we can really pick up the ball.

“We know how to keep the ball up,” she added.