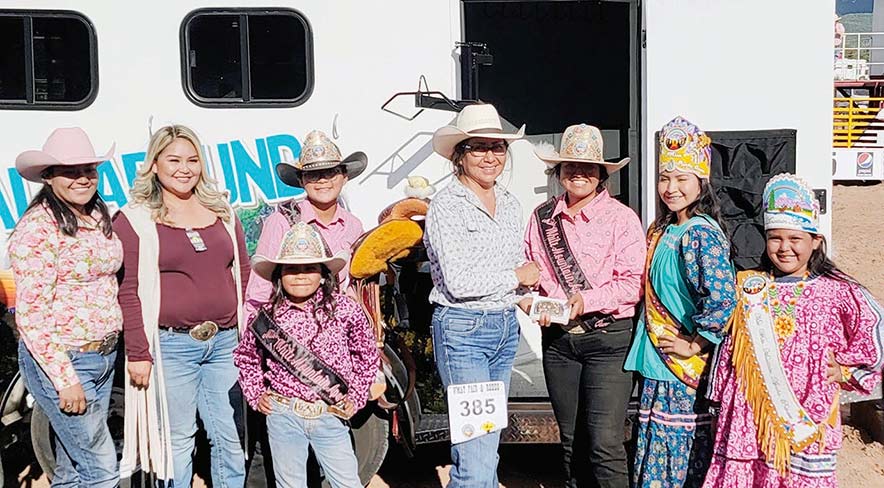 It was a long time coming, but after four decades of rodeo, Shiprock resident Kim R. Jim, won her first trailer as an all-around women’s champion.

She won that honor back in the beginning of September during the 95th Annual White Mountain Apache Tribal Fair and Rodeo All Women’s Rodeo event.

“I was just kind of always short of winning, but my mom always told me, ‘Sometimes prayers aren’t answered for a reason. God always has something bigger and better waiting for you.’

“I always believed in that even if it took this long. And the belief in it was like, wow, it actually happened today. Not knowing I was going to drive to a rodeo and then drive off with a horse trailer was just amazing to me.”

Initially, Jim wasn’t sure if they’d make it in time. The day before, she and her son were busy with another project far from Shiprock. They barely finished in time to return home for a two-hour nap before leaving again to head to Whiteriver, Arizona before 7:30 a.m.

The rodeo started as they pulled in, barely giving Jim time to change, unload her horse, Voodoo, and get ready for the second heat of the women’s breakaway competition. There were many competitors this year, almost twice as many participants as opposed to two years ago, part of the reason why they had heats and why the rodeo went on longer than normal.

She’d later also perform in the team-roping event, roping with Kylie Gilbert and Leah Platero. She thanks them for their partnership and help, saying without them, this achievement wouldn’t be possible.

In between events, Jim would watch the other events, just as much enjoying the rodeo as the rest of the spectators did.

Later it was announced she was this year’s champion in breakaway roping and she came in second place in team roping alongside Platero.

She was excited for this was her first buckle she’d win for this year. Despite an initial goof when she was given the wrong buckle, she patiently waited to be called back and presented with the right award.

Instead, the announcer rolled in the horse trailers that were to be presented to the all-around cowboy and cowgirl. Jim was happy to hear that her fellow Shiprock resident, Mia Wilson, was named runner-up and was shock when she was named as the winner for the women all-around.

“And it was just like wow, reality kicked in and I just couldn’t believe that I actually won a trailer,” Jim said. “I didn’t win it when I was young, I didn’t win it in my prime years; I won it just by doing what I do – roping. Breakaway roping and team roping. And that’s what I love to do and that was just mind-blowing to me, like hey, I’m still in the running. Now I’m in the trailer club with everybody else who won a horse trailer. It’s really exciting, I was amazed.”

Jim had won many buckles and cash awards before, as well as titles such as being the NNRCA’s first breakaway roping champion, making it to the NBHA World semi-finals and once meeting actor Kevin Costner, who she said has a great love for the indigenous community, but this win was very unique for her, happening at a venue she knew and in front of a crowd who know her as well.

She was about eight-years old when her father first started teaching her how to rope, saying if she wanted to win an all-around she needed to rope as well as ride. He would pass away when she was still young, but she had made it a goal in her heart to win an all-around for him and she’s glad she finally did it.

It took nearly forty years, two knee surgeries and a lot of rough patches over the years, especially the past two years, but she kept pushing herself and never stopped doing the thing she loved.

Doing rodeo and roping is all apart of the family tradition, something that was shared with her family and one that she now shares with her husband and five children.

Jim had already begun traveling with her new trailer. Ironically, before the White Mountain Rodeo, the family was looking for a new horse trailer to buy, so this feels like a gift from God. After winning, many fans stayed after the rodeo to congratulate her and they were pleased to hear that Jim plans to travel to all her future rodeos with the trailer, which has the White Mountain Apache name on it. Everywhere Jim goes, including national rodeos if she gets the chance, people will see she got her trailer from the White River fair.

Jim greatly appreciates the White River Rodeo Committee, specifically Lilian Lupe, they’ve both known each other and worked in rodeo for so long. After winning the all-around, the two hugged each crying. All the while, even though the rodeo had long ended, a large crowd had remained and continued to cheer for her and the other champions of this year’s rodeo.

“Even at my age, 47, that says a lot, that I can still hang in with the little girls,” Jim said. “And I’d talk to other little girls, I tell them to keep at it, never put yourself down, just do what you love and when you least expect it a big win will head your way.”

Jim hopes her story will inspire others, weather they’re rodeo athletes or from any other sports, to not give up on what they love doing and to continue pushing.

She is also very appreciative of her horses: Voodoo and Damage. Voodoo in particular was raised by the family since he was four-years old and who carried Jim to the INFR in 2015.

She thanks her family for all the love and support they have provided her over the years. Her husband Jeffry Jim for encouraging and traveling with her, her sister Anita Anderson for watching her youngest while she’s traveling and her mother Rena Nez and brother Kansas Nez for their support.

Her daughter is her biggest fan and critic, not being afraid to cheer for her mother or yell at her to go faster. Also, she is happy to report on Sept. 23 she and her husband will be celebrating 27 years of marriage.

“Those are things most things that I’m really appreciate, it was just having good rodeo friends and having a family base where our prayers are strong and they support me in everything I do,” she said. “And to everyone out, there all the ladies out there that never quit; never say you can’t do it and never doubt yourself.

“Just to whoever is reading this article, I hope that they believe in their selves. Some prayers sometimes are not answered for a reason. And then all together something tremendous will happen if you just believing yourself and you keep working hard every day.”