‘That much sweeter’: Laguna-Acoma repeat as 2A champs 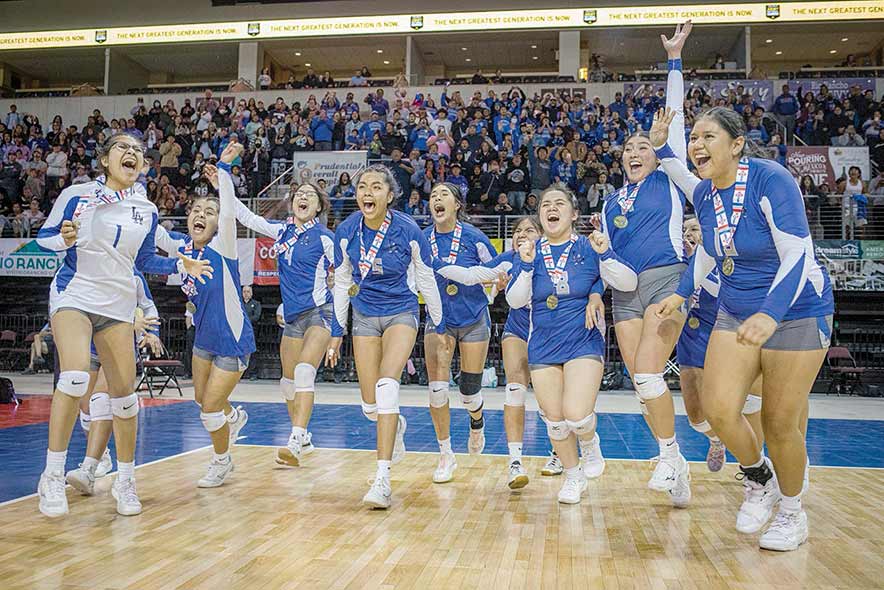 Laguna-Acoma, the defending Class 2A volleyball state champs, proved for the second consecutive year that it’s genuinely the best in the state.

Exhibiting a balanced hitting attack led by its lofty outside hitters, the No. 1 seed Laguna-Acoma (25-1) breezed through the Class 2A state volleyball bracket with an imposing state performance, sweeping all four state matches and not losing a single set. 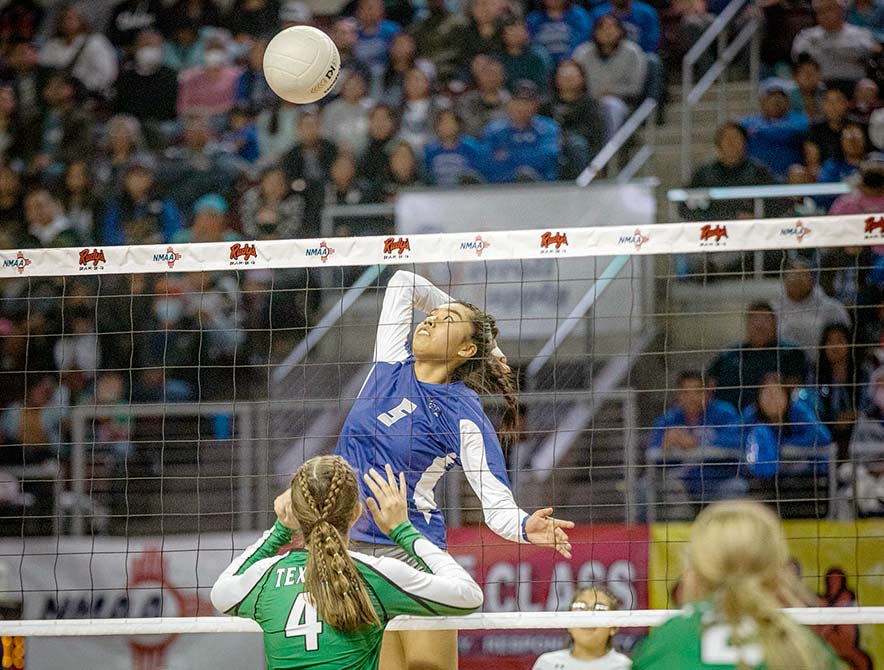 Playing confidently during the three-day state tournament, the senior-heavy LA Lady Hawks coasted past No. 3 seed Texico 25-14, 25-14, 25-19 Saturday afternoon to put their signature on back-to-back state titles at the Rio Rancho Event Center.

“It’s so exciting,” said second-year LA head coach Esther Lorenzo who has guided the Lady Hawks to a combined and remarkable record of 48 wins with just five losses the past two seasons.

“It’s bittersweet to see them leave. We won last year for our first state championship; to win it back-to-back, it’s that much sweeter,” she said. “It means a lot to win back-to-back state titles and to have everyone out in our community. It means a lot to these girls to have the support and love they get.”

Standing just 4-foot-11, Lorenzo admitted that she literally has to look up to most of her players.

Playing in front of an enthusiastic Laguna-Acoma following all three days, the Lady Hawks swept their four state matches.

In the state finals, the 19-8 Texico Lady Wolverines held leads in the opening and third sets, which proved to be the best set for Texico. Still, it ultimately could not match Laguna-Acoma’s aggressive hitting at the net.

Trailing 3-0 in the first set, Laguna-Acoma stormed ahead on kills by junior outside hitter Savannah Suazo, a bullet by Gedmen, and an off-speed kill by Day. The Lady Hawks never looked back, winning decisively 25-16.

Set 2 proved to be a repeat of the opening set.

Tied at 6-all, Day, who finished with 11 kills, delivered crushing back-to-back kills. Sophomore libero Kaylee Lorenzo hit the ball that hugged the net before falling for a 23-14 LA lead. A service ace by Mariano gave the Lady Hawks a set point.

Day then hammered the winning hit for a 2-0 set advantage.

Texico, which lost to Laguna-Acoma in the second round at state last year, was able to muster more of a hitting attack in the third set.

The Lady Wolverines grabbed a 12-11 lead on a kill by senior middle hitter Emma Wahlen. But LA’s outside hitter Gedmen, who put down 10 kills along with three blocks, rammed home an off-speed spike that tied the set. Day put away the go-ahead point, and the Lady Hawks never looked back with their eyes firmly focused on their second straight blue state trophy.

For the second state finals, LA’s senior outside hitter Kelsey, a three-year starter, was in the right place at the right time.

Kelsey, who finished with a match-high 15 kills, got the ball from setter Marino and then delivered the set and match point for a state title-clinching 25-19 win that had the LA fans celebrating in the stands.

“It was exhilarating because we switched the lineup so we could put all the seniors into the rotation,” Kelsey said. “So, I was kind of nervous. I’m used to hitting outside, so when I hit the ball, it was just another hit, but I didn’t think it was going to be a kill. Last year I got the winning hit too. I was thinking, ‘oh my gosh.'”

Lorenzo said she was not nervous when Texico put up a fight in the third set.

Kelsey admitted that her teammates knew this would be a state championship team again, with eight of the 12 players seniors.

“I kind of knew that we would take it. It’s just like a mental game for all of us. We had to get out of that mind frame of like knowing what to do when to do it, and like we played our game, and all the work and effort just paid off in the end.”

“She’s very consistent. She’s very focused. She got it done,” she said.

“They came up with a slogan which is “MTXE,” which is Mental Toughness, Extra Effort. We try to instill that into our players’ minds that no matter what happens if we miss a serve, or if we drop a ball, they just gotta put it together and then get the next point and put their mind over matter.”

During the single-elimination Final Four, Laguna-Acoma knocked off No. 7 Cloudcroft 25-12, 25-33, 25-8 Saturday morning before polishing off Texico in the state finals.

Gedmen, who plays middle hitter and middle blocker, said she grew in height during the off-season.

Gedmen said that when she was in the eighth grade, the school approached her to play volleyball and basketball.

“My eighth-grade year, I was getting recruited within my school because I was 5-8, 5-9,” she said. “They came to me and asked, ‘Do you want to play?’ And straight out, I said, “No!”. They said, ‘Give it two weeks. If you like it, then stay. But try it for now.’ I like everything about playing—the sisterhood within the girls. We just click. It feels good to have a side family – your home away from home to where you can be yourself and be around other people.”

Last season LA finished with a 23-4 record as the No. 3 state seed Lady Hawks stunned top seed Tularosa 3-0, 25-22, 25-20, 25-12 in the state finals. Going back to last season, LA has strung together a spectacular 31 consecutive match wins before falling to SFIS.