Volleyball wasn’t supposed to be a college option for Jordan Louis. 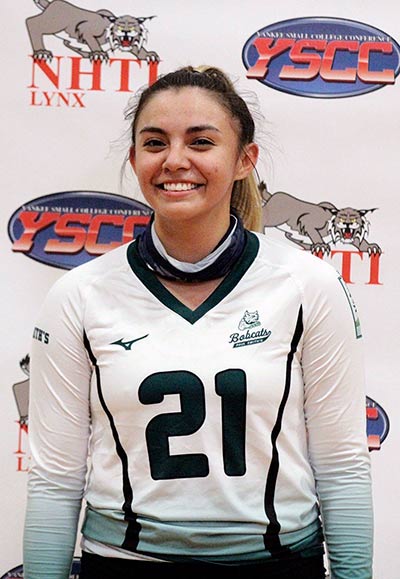 The Navajo Pine High graduate intended to play basketball – for which she was recruited – at Paul Smith’s College (New York).

But the freshman joined the volleyball team right before the season started and emerged as a standout.

“To me, it has been a surprise,” she said. “I have some pretty good teammates.”

The outside hitter and defensive specialist was named to the all-Yankee Small College Conference team and the offensive player of the conference tournament.

She received a plaque for the all-conference honor.

“She can do it all,” Paul Smith’s head volleyball coach Ritt Roberge said. “She was the missing link.

“She’s consistent. She has an all-around game,” he said. “She makes the other players better. She’s an exciting player.”

She led the team in points and service aces and ranked second on the team with 2.39 kills per set and 3.16 digs per set.

She ranked ninth in service aces and 20th in kills per set among U.S. Collegiate Athletic Association players.

Louis had at least 10 digs in 12 matches and 10 or more kills in six matches.

She finished with five double doubles, four consecutive in Oct. 2 to 3 matches, including season highs of 23 digs and 13 kills during an Oct. 3 win over Northern Essex Community College.

“It was a good range between cross court and hitting the line,” she said about her kills that October weekend. “It was a run of confidence.”

At 5-foot-2, the shortest on the team, Louis has a vertical jump of 17 to 18 inches, a couple of inches shy of the vertical for the taller Bobcats, according to the coach.

“She packs a punch,” he said. “She’s got good technique.”

She had at least 10 digs in a season-high six consecutive matches, with 20 or more in two of those.

“She’s all over the court,” Roberge said. “She’s a very good defensive player.”

Her quick reactions defensively allow her team’s offense to answer.

“It’s mainly watching the hitters, watching their shoulders. That tells where they’ll hit it,” said Louis, who had a season-best 10 aces against Southern Maine. “Taking power off the hit to get it to the setter.”

After the season is complete, she said she will be a point guard on the basketball team full time.