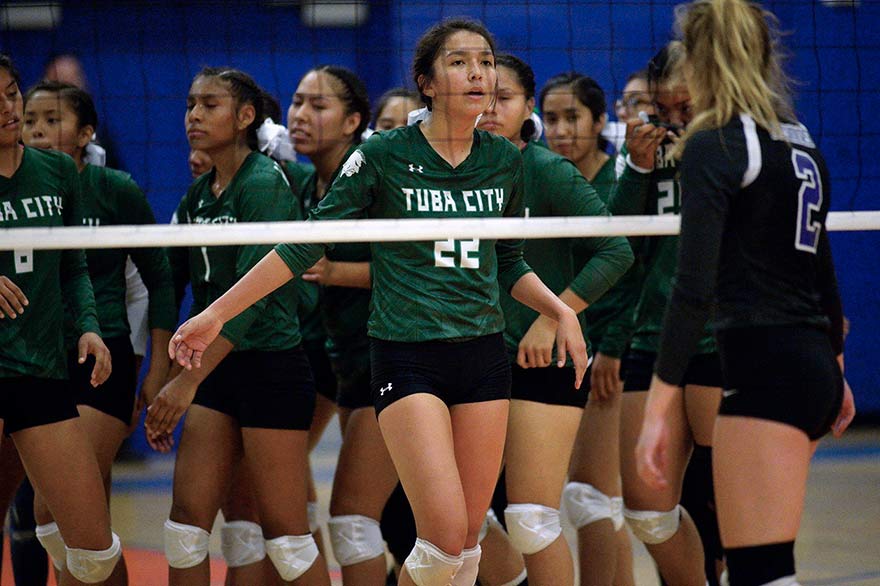 File photo
The Tuba City Lady Warriors came up one game short of reaching the championship game at last year’s Arizona 3A state volleyball tournament. The Warriors played extensively in several high profile tournaments over the summer in hopes of bringing home a state title this year.

The Warriors entered the Arizona 3A state volleyball tournament as the No. 2 seed but, in a ferocious display of firepower, the Phoenix Northwest Christian Crusaders ended Tuba City’s hopes of reaching the championship game last November.

Barlow’s group is looking to change their fortunes this season as they played extensively over the summer.

“The girls that are coming back played a lot of club ball, which is a good thing,” Barlow said. “They already have that compatibility down and they have that experience of playing at a high level.”

As part of the Tuba City Starlings traveling team, Barlow’s group played in some high profile tournaments during the summer in Hawaii, San Diego, Las Vegas and Phoenix.

“The tournaments that we played in were not easy,” he said.

He said playing in those tournaments helped developed their game, as his current high school squad wants a state title.

“Most of it is just growth,” he said. “Toward the end of last year we actually started to see competitive teams and I felt that we weren’t ready for that.”

In last year’s state semifinals, Barlow said Northwest Christian stayed locked in with their game plan by speeding up the game. And while they had their moments, he felt that his team played sporadically against a high-caliber team.

Based on their experience over the summer with the teams they faced, Barlow said they have the talent and skills to bring home a state title.

“We need to be creative because we’re still going to be that team to beat,” he said. “Everybody has that goal of winning state. To be a state champion you have to knock out that No. 1 team.”

Of the tournaments they entered, the Starlings won three of them, including two in Las Vegas and one in Hawaii.

They also placed in the top 3 in the Arizona region tournament. With that his squad got invited to play in the open division, which consists of 6A, 5A and 4A teams from around the state. Barlow said they were seeded No. 22 but they finished 11th overall.

“A majority of those girls we played against are probably going to play college ball,” he said.

As for their trip to the Aloha state, Barlow was expecting a different outcome.

“To be honest I seriously thought we were going to get our butts kicked,” he said. “That’s what I wanted because I wanted to have these girls get humbled. In a sense we did because those teams were flawless out there. It was like everything you teach in volleyball, they did it perfectly.”

To nab the title, Barlow said his girls didn’t wince even though they had the unenviable task of playing girls that were clearly taller than them.

“It was just an amazing experience to see volleyball in Hawaii,” the Tuba City coach said. “And the way we won the game was everyone played together. Everything just clicked and they didn’t let any balls drop. They all played smart.”

Of the girls that played on the Starlings team, five will suit up for the Tuba City high school varsity team. They include senior Jayda Chee, junior Mikeya Sheppard, senior Gracie Henderson, junior Jadan Sixkiller and sophomore Daveigh Bedonie.

Barlow said he was supposed to have eight returning lettermen but three players transferred to nearby schools with Monument Valley picking up two and Page picking up the other.

Despite losing three players, including two starters, Barlow isn’t expecting a huge drop off. Instead they are looking to get far in the 3A state playoffs.

“We have to work with what we have and play smart volleyball,” he said.

Because of their extensive traveling endeavors, Barlow said he wasn’t able to see any of the 3A North Region teams. Nonetheless, he’s expecting every team in the conference to be competitive.

“Monument Valley is always up there,” Barlow said. “Page is coming around. I haven’t really seen Chinle, Ganado and Window Rock but they played us tough last season.”

Tuba City opens the season on Tuesday hosting Hopi in a freedom game. The Warriors will then take part in the Coconino tournament in Flagstaff Sept. 6 to 7.