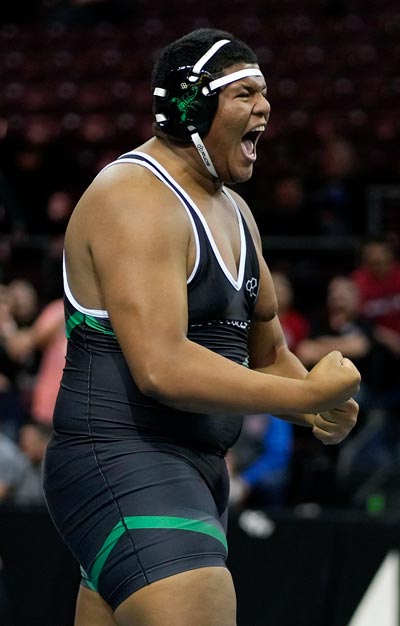 Just as they did last season, the Farmington boys and the Miyamura girls hoisted the blue championship trophy at the conclusion of the New Mexico high school state wrestling tournament on Saturday night.

Behind five state qualifiers and one individual champion, the Lady Patriots amassed 80 points and beat out district rival Aztec for the state crown as the Lady Tigers finished with 64.

The Patriots won its third consecutive state crown and got four wrestlers in the finals, with sophomore Lorianna Piestewa winning the 107-pound weight class.

Aztec, which qualified three wrestlers, got two state champions: Makayla Munoz (126) and Princess Altsisi (138). The titles on Saturday were the third straight for the Tiger wrestlers.

In the 5A boys team title race, the Scorpions secured its second straight title behind a fall from heavyweight Kioni Benally, who pinned Los Lunas senior Ryan Vega in the second period.

The Scorps had a five-point edge over Los Lunas in the final match.

“Kioni knew it came down to him,” Farmington coach John Mason said. “He took the pressure, handled it, and took care of his job.”

In addition to Benally, Farmington also had junior Ivan Smith win a state title at 170 while six other wrestlers medaled.

“Every man had to put their time and effort in even the little guys that went one-two,” Mason said. “Every one of those points counts, and this was a great team effort, and we finished with a great individual effort.”