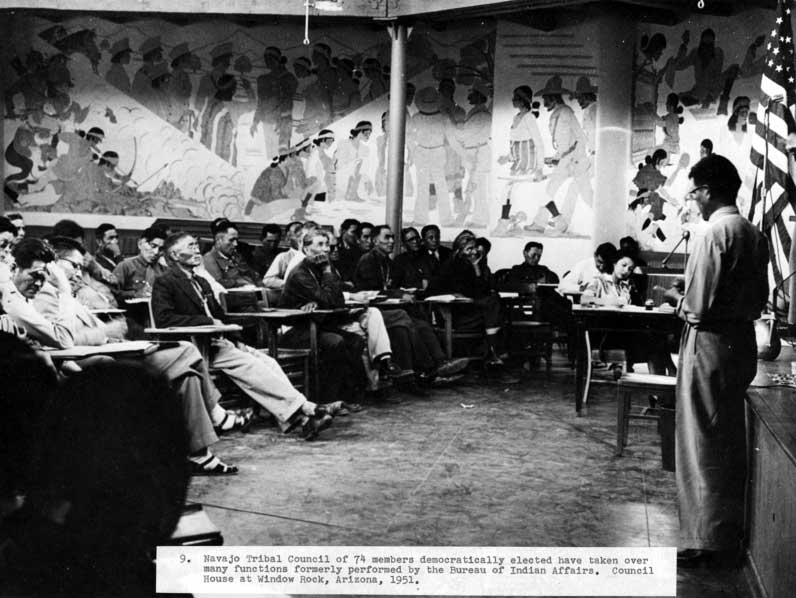 The Navajo Tribal Fair was held this week and, yes, there was a controversy. While it seems today to be a little petty, the story was carried on the Associated Press national wire and hundreds of newspapers all across the country.

The controversy centers around the speech that U.S. Vice President Hubert Humphrey made at the fair. No, it had nothing to do with Humphrey’s speech, which was long and didn’t say much of anything.

Instead it’s entered on who was not invited to sit on the podium behind him when he was making the speech.

The complaint heard all across the country came from former New Mexico Gov. Tom Bolack who said he was slighted in his seating arrangement at the fair.

Bolack had been selected by the state’s current governor, David Cargo, to represent him at the fair.

But when Bolack came to the fair to hear the vice president speak, he was escorted to a seat in the grandstand of the rodeo arena instead of one on the speaker’s platform.

He appeared to be angry and upset, according to the AP story that ran the next day, saying he felt he deserved a spot on the platform along with the other VIPS.

But as he looked at the people on the platform, he noticed they all had something in common — they were all Democrats. In fact, said Bolack, it looked like a Democratic Party rally.

Bolack, a Republican, was representing Cargo, another Republican. All of this, said Bolack later, seemed to be a little petty.

He said he learned that it was Humphrey’s decision and not the Navajos to sit him in the grandstand.

“I don’t hold any ill feelings against the Navajos,” Bolack said, adding that he has paid out more than $1 million in wages to Navajos who work on the his ranch in he Farmington area.

Navajo Tribal Chairman Raymond Nakai put out his own statement saying Bolak was not slighted. He said he didn’t learn of Bolack’s status as a representative of Cargo until shortly before he arrived on plane at the fair.

He said there had been a seat reserved for Bolack but not in the VIP area because of Humphrey.

Speaking of that year’s fair, Nakai said, “This was our party and our friends.”

As for Cargo, when he was interviewed, he said he didn’t have anything to say to leaders of the Democratic Party who were in town for Humphrey’s speeches. He declined to say anything except he felt the whole controversy was “petty.”

The BIA issued its annual survey of trading posts on the reservation and, for the first time, reported that sales at trading posts were going down because people were now going to border communities to do their shopping.

This was big news on the reservation where traditionally Navajo families did their shopping at nearby trading posts, oftentimes spending an entire Saturday exchanging news and gossip with other Navajos who came to the store. Go to any trading post on a Saturday and you could expect to meet up with someone you know.

But by 1967, as the BIA survey found out, things were changing.

About 40 percent of the Navajo families interviewed said they did part if not all of their family shopping in off-reservation border towns, where the prices were cheaper and they had more selection to choose from.
But it was hard for some Navajo families to take the plunge because they were so financially tied to the trading post.

For example, the trading post was also usually the post office and Navajos getting any government benefits had to go to it to get a check cashed and they would come under a lot of pressure to be loyal to the trading post.

It’s possible that many traders saw the handwriting on the wall because 1967 marked a turning point for them as well — more than 20 trading post operators sold their businesses or burned them to the ground to collect insurance.

In 1967 and 1968, readers of the Times would see the decline in trading posts as better roads were built and convenience stores began popping up.