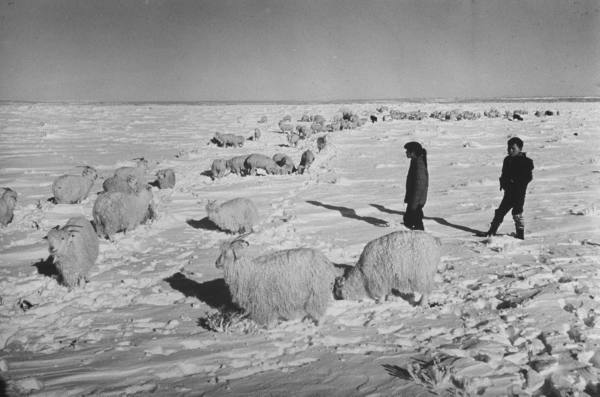 How bad were the snowstorms that hit the Navajo Reservation in mid-December of 1967? 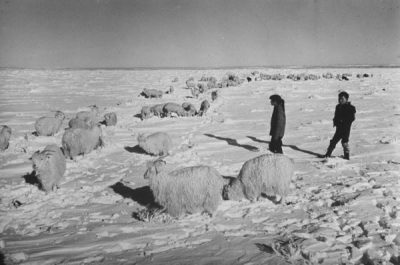 For the first time in its history, the Navajo Times cut back on deliveries of the newspaper and only distributed in major communities because roads to the smaller communities were impassable. Most Navajo families had to stay home for several days because of the road conditions and tribal offices were either closed or were being kept open by a staff member or two. Chapters had to cancel meetings and in some cases, Christmas parties.

Those stores that did stay open reported doing very little business. As for crime, if there was any, the Navajo police had to postpone any investigations because police officers were assigned the task of making sure that families who were stranded got whatever help was needed.

Helicopters from Kirtland Air Force Base in Albuquerque were assigned to the reservation for almost two weeks to help deliver food to stranded Navajo families but many days they could not fly because of snowstorms.

Ranchers on the reservation were sending pleas to the Navajo tribal government, almost on a daily basis, to airlift hay for their livestock but food deliveries came first and it wasn’t until Dec. 20 that the first deliveries of hay were sent out. A lot of livestock died that month. Just how many was never mentioned in the Times or other papers but Navajo Tribal Chairman Raymond Nakai in speeches in 1968 would say that most ranchers on the reservation were “terribly affected” by the storms.

There were reports of human deaths as well. The official account listed five deaths but the Associated Press kept saying in its stories that the death toll was at least 12. Tribal officials said this included deaths for areas adjacent to the reservation. At one time, about Dec. 17, tribal officials feared that the death toll would be a lot higher because of stranded piñon pickers and a search party that were missing, but in both cases the people turned up safe and sound.

Nakai would later praise the Navajo police and others who participated in the food delivery services for their efforts during the crisis, saying that without their help, the situation could have become tragic for many Navajo families.

There were reports that some people took advantage of the situation. Food and hay was delivered to the chapters to be delivered to stranded families but some families who had access to the major roads were accused of taking supplies that should have gone to those that were actually stranded. Tribal officials later said this was a rare occurrence.

The one benefit that came out of this situation was that tribal officials, for the first time, talked about the creation of an office that would be responsible for supervising operations when emergencies like the snowstorms occurred. But the decision was to allow the tribal police and rangers to keep this responsibility since they had the manpower and the experience from previous emergencies.

In other news, the Bureau of Indian Affairs, in a report issued in late November, said that bootlegging on the Navajo Reservation was continuing to flourish. Every chapter on the reservation was reported to have at least one bootlegger and some had several because the business was so profitable.

BIA law enforcement officials said buying liquor at border towns was not difficult and many bootleggers received discounts. But they were still able to charge three or four times the retail value, depending how far the community they served was from the nearest package liquor store. An examination of arrest records for 1965 and 1966 only showed a handful of bootlegging arrests and even BIA law enforcement agents said it was hard to make a case because most bootleggers refused to sell to someone they did not know and trust.

There was no mention in the report of what happened to the bootleggers after they were arrested but it was unlikely that they had to serve any jail time and probably only received a fine. The report also indicated that while bootlegging was a major crime on the reservation, there didn’t seem to be much pressure from the tribal government to crack down on the problem.