In these days of endless lockdowns and restrictions, artist Armond Antonio says his life has not changed much due to the COVID-19 pandemic.

His focus lies on the long horizon of the Navajo landscape and bridging the past with the present.

“A long time ago it was like this,” said Antonio. “No one would really come around – only once in a great while.”

He says he doesn’t mind solitude and being out in nature does him good. 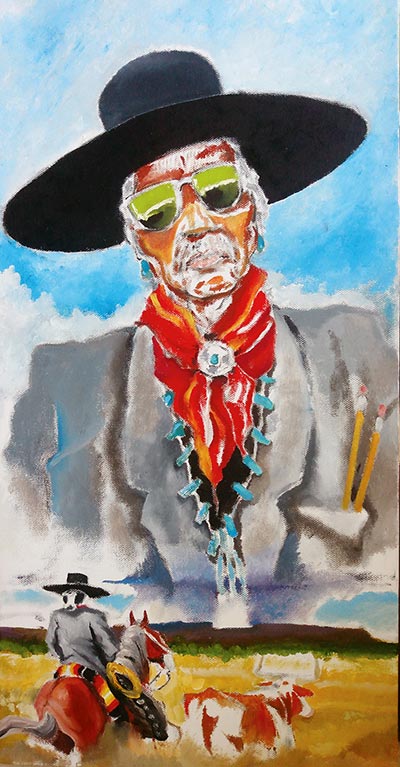 Antonio’s time is divided between tending to his livestock and painting and drawing, capturing moments of what he calls his “old school” lifestyle in Pueblo Pintado.

“One day I’m painting and the next day I’m with the cows,” he said.

He says his best moments are spent listening to the stories and the teachings of the local elders, whom he depicts in his work.

“Looking at these Navajos with wrinkles on their faces and hearing the stories they tell, I really like painting them and talking to them,” he said.

‘Back in the day’

Raised in Gallup, Antonio says his appreciation for the traditional way of life is something he learned from his father Elton Antonio, who worked for Union Pacific Railroad.

“My father used to talk about his grandparents and other Navajos when I was growing up,” he said. “I would just listen to him and want to live that way. They were really traditional and the only thing I knew about them is through stories and photos.”

Donning a tsiiyéél, jeans, turquoise and his signature black, flat-brim concho hat, Antonio has embraced the styles his ancestors wore as part of daily life and work on the reservation.

Antonio’s interest in drawing was also sparked by his dad when he was a little boy.

“I used to watch my father draw,” he said. “That’s where I picked it up from.”

His mother Aurelia Smith worked for the Gallup Indian Medical Center, but both parents spoke Navajo at home, so Antonio learned his Diné language early on.

“I was supposed to visit for a few days and I just ended up staying here,” he said. “I got tired of living in town.”

Herding cattle was a lot more fun, he said.

The challenges Antonio faces today in caring for his animals with no running water and as an artist living in a food desert are nothing new, he says.

“A lot of people have limited access to food,” he said.

To augment his supply of staples, he started farming and planting corn, beans and squash.

Without a car, he relies on his horses for transportation and regularly rides to the local trading post and to work on other ranches.

“A lot of people thought I was old-school or just doing it for fun,” he said.

In actuality, traveling on horseback comes out of necessity, he said.

Antonio said that’s just what his grandpa would have done “back in the day.”

Along the way, his experiences inform his artwork, he says, and he is inspired to paint the scenes he encounters on his journeys.

“I told him I didn’t have a ride or a driver’s license,” said Antonio.

So Antonio promptly set off on horseback to make the delivery.

“Armond did something really extraordinary,” said Farah. “He rode his horse all the way to Santa Fe and brought us the work.”

Antonio said the trip from Pueblo Pintado took him four days and nights and he trotted into Santa Fe at sunrise.

“He’s an old soul and he’s living that life,” said Farah. “It’s not like he’s romanticizing it. He’s a Navajo cowboy.”

“He’s an unbelievable draftsman,” said Farah. “He has that kind of old-school technical skill and it really shows. It will shine through in whatever he creates.”

Antonio’s Navajo ranch and western landscapes that feature the elders, livestock and ranch hands at work are beautiful and authentic, said Farah.

“He’s documenting that lifestyle,” said Farah. “He is that life and he’s drawing and painting what he knows. It’s an acknowledgement of the past, paying homage to the ancestors, the elders, and ways of life.”

Antonio said he feels a responsibility to depict the life on Navajo as he sees it today.

“It’s just like recording history, and how much it’s changed,” he said.

He believes his work reflects the lineage and traditions passed through generations, and he’s happy to be doing his part to preserve that.

Diné ceremonial life has also impacted him greatly, he said.

“Sometimes I draw it, how I see it in person, because we can’t take photos,” said Antonio. “When I draw those, it’s usually from memory.”

He also learns from the medicine men he meets on the “horse and art” trails.

The one thing that Antonio has missed during the pandemic is to be able to travel more across the Navajo Nation.

He had a trip planned to Monument Valley last fall but had to cancel that due to the tribal parks being closed, he said.

COVID-19 has hit his local area hard, he says, because people live in remote family clusters where they depend on each other.

“It spreads easily out here,” he said.

Fundamentally, he views himself as a storyteller and if there is beauty in his work, he says, it is based on life’s struggles.

“When I first started as an artist, a few people told me it’s best to have the story to go with your work so you’re not just painting beautiful pictures and there’s no meaning behind it,” he said.