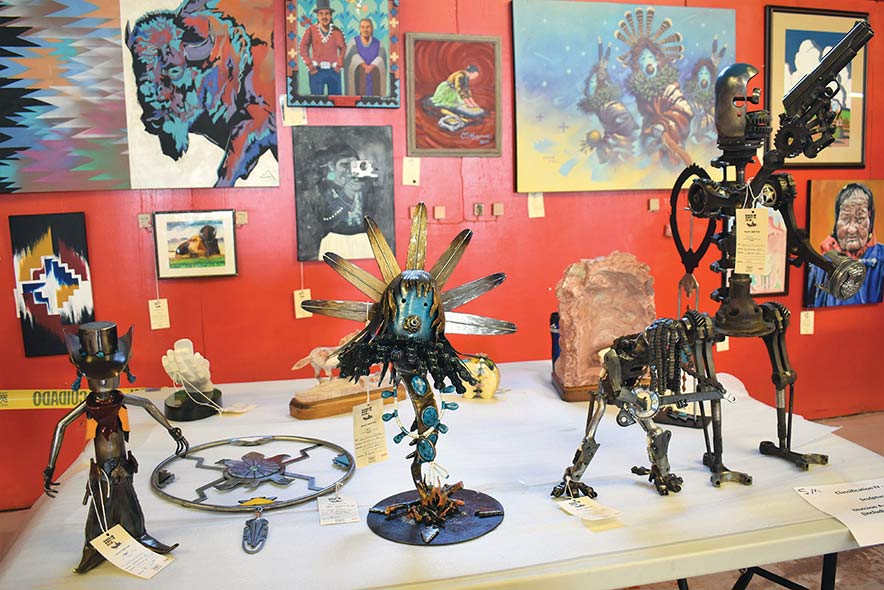 It’s one of the older events, but the emphasis in this year’s fine arts competition at the Navajo Nation Fair is on youth and innovation.

All of the judges this year are Diné artists, said Navajo Nation Museum interim curator Molly Bigknife Antonio, who believes they are the best peer group to be making award decisions. “This year we want the up-and-coming, innovative artists to have a chance to be included,” she said.

“We have more divisions within each art classification than we have ever had so more artists than ever are going to receive awards.” The art awards are primarily funded through the Navajo Nation Gaming Enterprise that donates $30,000 annually toward the fair’s artist awards and prizes.

In a spruced up, dust-free hall Wednesday morning, tables were lined with weavings, jewelry, pottery, baskets and sculptures, and paintings were already installed on the walls, offering an eye-catching array of color and design for the judges to consider. “I’m glad they have this competition for the fair,” said painting judge Christian Bigwater.

“As an artist, I see the level of creativity that happens here. It’s very good to experience and enjoy the visual display of culture, colors and storytelling.” There were easily over 600 pieces entered in the competition this week, says museum Director Manuelito Wheeler, who is overseeing this year’s event. Approximately 25 percent of those were youth entries, he added. He said he believed the painting category had the most entries, followed by jewelry and diverse arts.

The fine arts competition entries and winners will be fully on display and open to the public starting today at 10 a.m., said Wheeler. The Nizhoni Arts Market will open today as well, and should be bustling with vendors by Friday and through the weekend. “We’d love to invite everybody out,” said Wheeler as the judging commenced.

“It’s a great time during the year at the fair and we have some great awards. There will be plenty of artwork to see and buy.” Wheeler said almost all of the Nizhoni Arts Market vendor booths are sold out but there are a few spaces left. Anyone who still wants to sign up should text event organizer Nate Bitsoi directly at 928-592-2707 for information. He added that there will be a fashion show on Friday and Saturday at 5 p.m., which should be a big draw as well.

“Those are very popular and get very full, so come early,” he said.

“I’m really excited,” said judge and Diné weaver Ephraim “Zefren” Anderson, who won last year’s overall best of show award, and was in the midst of poring over the weaving entries. This year Anderson donated $2,000 of his own money to fund a new specialty weaving award that he is jurying. He was elated at some of the entries that featured both traditional and contemporary motifs. “The elders are experimenting too. It’s not just the youth,” he said.

“There are some youths weaving old styles and I see some elders who are weaving something that’s contemporary, which is awesome! That’s the whole point of this award.” Anderson, who is also a silversmith, made the “Zefren M. Textile Award” ribbon out of silver. “I’m here to give recognition to those who are still weaving traditional styles, doing something new, or even weaving clothing,” said Anderson.

Anderson said it’s going to be a very hard job for him and the other judges in any category as there were so many great entries this year. Wheeler shared that the fine art award-winners will be announced via the Navajo Nation Museum Facebook page and will be posted in a prominent space at Gorman Hall by today.

“It’s always exciting and also a little nerve-wracking,” said Wheeler, whose museum staff has been working on preparations for five weeks. “We’re looking forward to getting it all started.”