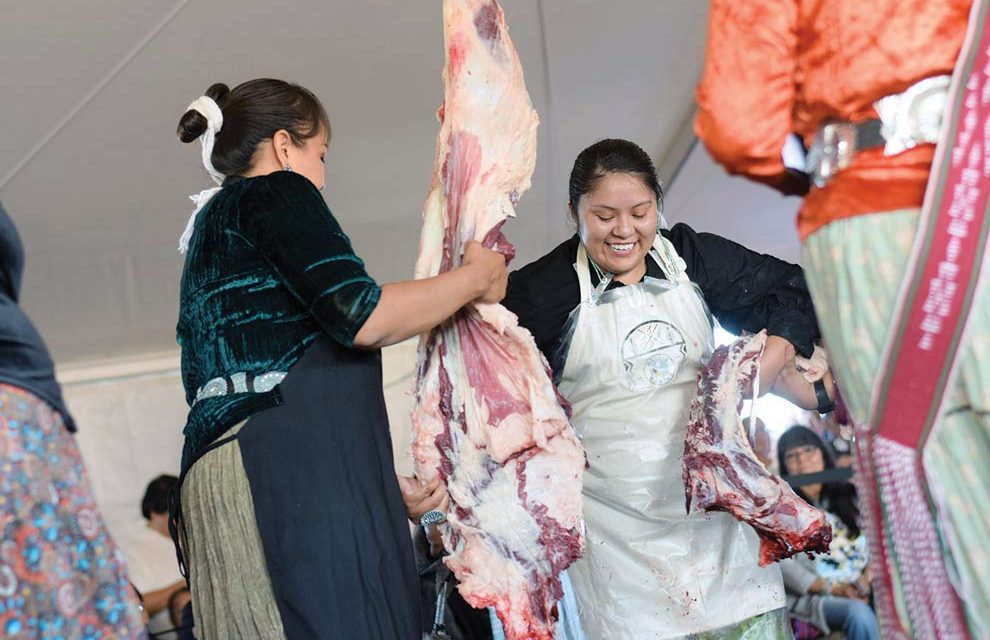 As the only two contestants running for the Miss Navajo crown, Kayla Martinez and Shaandiin Parrish had support from former titleholders to help them get through the popular sheep butchering competition Monday morning. It was a sight to behold as a dozen former Misses Navajo dressed in beautiful, colorful traditional garb worked at different tasks throughout the competition that kicked off the 73rd Navajo Nation Fair.

“I haven’t seen so many Miss Navajos in one place,” said comedian James Bilagody to the crowd. “It’s nice. They’re still beautiful, huh? Danizhóní!” With help from the retired royalty, Parrish had her sheep ready to be dismembered and gutted in 28 minutes. When asked how many sheep they butchered over the summer to get ready for the contest, Martinez said, “Ashdlaa’,” meaning five. Parrish answered that her grandmother had a flock of 15 sheep at the beginning of the summer, but at the end she only had four lambs.

“Each one possesses some kind of knowledge that will help a Navajo household, will encourage young people both in traditional and contemporary ways.” Luther and Miss Navajo 1982-83 Sunny Dooley came up with the idea of the council while they were judging the Miss Northern Navajo pageant. The Miss Navajo Council formed in 2005 and works to strengthen Navajo language and culture with youth workshops, as well as assisting with the Miss Navajo pageant.

“We thought if we brought them all together they could really help develop a unique education to encourage our young folks to live a healthy life,” said Luther, “to become a wholesome individual.” While the former Misses Navajo helped the contestants, the crowd cheered as Parrish completely took the skin and wool off her sheep. Martinez wasn’t able to finish her butchering within the one hour allotted time, so volunteers finished the job. After the butchering, Parrish and Martinez showcased their food preparation skills by preparing ‘ach’íí’.

“I think it’s exciting to display what you know about butchering,” said Ramona Silversmith, who travelled from Continental Divide, New Mexico, to attend her first sheep-butchering competition.

“Of course, they’re from different areas and people do stuff a different way. I don’t think it’s ever too late to correct some things.” Silversmith said she learned to butcher when she was a young girl and her technique is different from that of Parrish, who is from Kayenta, and that of Maritnez, who is from Window Rock.

“This is my first time,” said Silversmith. “I always wondered if they did it right. There are some things I would do differently. My family is very particular about making the meat because this is what we are going to eat. It has to be done right and it has to be clean.” The sheep butchering was not always part of the pageant. It wasn’t included until the mid-90s.

When Jennifer Jackson Wheeler won the crown in 1990-91, she said the butchering contest wasn’t included and when it was first introduced she said reaction was divided. “I think that was a very different part of the pageant because it was new,” said Wheeler. “Some people supported it because that’s who we are and that’s part of our lives. “At the same time there was those who thought it shouldn’t be there for various reasons, just one being not every Navajo woman comes from a family of livestock,” she said. “But all Navajo women should not only know how to butcher, but cook and be knowledgeable about our traditional foods.”

Parrish said “respect should be mutual.” Vegetarians expecting those around them to respect their eating habits should be respectful of those who do butcher.

People were surprised that there were only two contestants. Up until a few years ago, there would usually be 10 girls or more who competed for the crown. But those days have ended and fewer women participate every year. In the years when Wheeler and Luther competed for Miss Navajo it was done a bit differently.

Those were the days when the women represented their agencies so each agency had someone competing on their behalf. “I was Miss Central Navajo,” said Wheeler. “At that time we had to sign a contract at the beginning of our agency year and it stated that I would represent my agency at the Navajo Nation Fair’s Miss Navajo pageant. That’s how it was back in those days.”

Wheeler said there were at least nine or 10 ladies competing alongside her and each agency was represented. Miss Navajo 2006-07 Jocelyn Billy-Upshaw was upbeat and hopeful as ever and said being in the midst of the Miss Navajo butchering was a beautiful thing. “What sets us aside as a people is our language, heritage, perseverance and our determination to continually being better, healthier and heighten one another’s esteem and that’s t’áá hwó’ ají t’éego” said Billy-Upshaw.

“You are continuously learning, developing and it’s a beautiful process. We need to continue the spirit of Navajo.”

The Miss Navajo Nation coronation is Saturday at 6 p.m. at the Dean Jackson Memorial Arena.