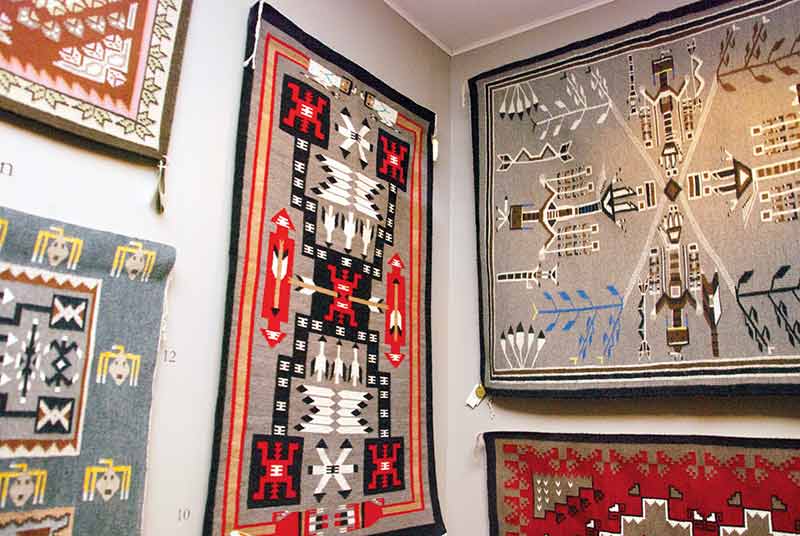 Elijah Blair says it’s absolutely amazing what Navajo weavers can do. For 31 years as a trader in the Dinnebito, Ariz. area, he bought and collected intricate rugs from the local weavers. These rugs from the 1960s are now part of the Blair Family Collection. John Wesley Powell Museum in Page, Ariz. for two years put on display 17 rugs to honor Diné weavers. (Times photo - Krista Allen)

Elijah Blair says it’s absolutely amazing what Navajo weavers can do. For 31 years as a trader in the Dinnebito, Ariz. area, he bought and collected intricate rugs from the local weavers. These rugs from the 1960s are now part of the Blair Family Collection. John Wesley Powell Museum in Page, Ariz. for two years put on display 17 rugs to honor Diné weavers. (Times photo – Krista Allen)

Navajo Times writers and photographers throughout this year ventured out to discover and convey the reality of brilliant and resilient individuals who are preserving the Diné culture and the Diné language in their own unique way.

As the New Year nears, here are our top 10 stories (in no particular order) from our discoveries:

Weaving has been perhaps the most valued and sought after textile product of the American Southwest.

The aesthetic beauty, unique stylistic changes, and sensible use of woven textiles combine to make them magnificent pieces of functional art. And in many ways, weaving reflects the adaption, survival, and transformation of a people such as the Diné.

The Times reported in its Jan. 15 edition a story about an exhibit in Page, Ariz. honoring Dinnebito Trading Post rug collection.

For more than 60 years as a trader, Elijah Blair, then 87, also known as Jaa’yáázh, collected and bought rugs from Diné weavers who in all likelihood have traded thousands of dollars worth of textiles.

And for the past two years, the rugs were displayed at the John Wesley Powell Museum, honoring and providing an exhibit entitled, “Weaver’s Trail: Honoring Navajo Weaving at Dinnebito Trading Post” for 17 rugs from Blair’s Family Collection.

“I want to show and honor the Navajo weaver,” Blair told the Times. “How talented and artistic they are, and how diversified they are.”

Photographer Kenji Kawano poses next to a few of his many images he has caught during his 40 years of living among the Navajo people on Friday in Window Rock. (Times photo – Donovan Quintero)

Kenji Kawano has become a household name on the Navajo Nation and rightly so, as he has spent the last 40 years documenting the lives of the Diné people.

His work has been displayed across Japan in Germany, and in various states in the U.S. including the CIA Headquarters in Virginia; and once at the Navajo Nation Museum.

For the second time in his career, an exhibit featuring his work opened at the tribal museum.

Disney’s most famous fish, Nemo, from “Finding Nemo,” is shown on a TV screen while an actor records a scene in Navajo. (Courtesy photo)

The Times reported other stories about preserving language, which include relearning the Diné bizaad at the Intergenerational Conference in Ts’ahbiikin, Ariz., how a daughter of a Code Talker is encouraging the use of Diné bizaad, learning the clan system with a mug of coffee, and last but not least, how a Steamboat, Ariz. youngster was selected for the lead role in the Navajo dubbed version of Disney’s “Finding Nemo.”

Finding Nemo in early June moved forward and the leading fish was portrayed by Quentin Kien, 12, who played the voice of Nemo.