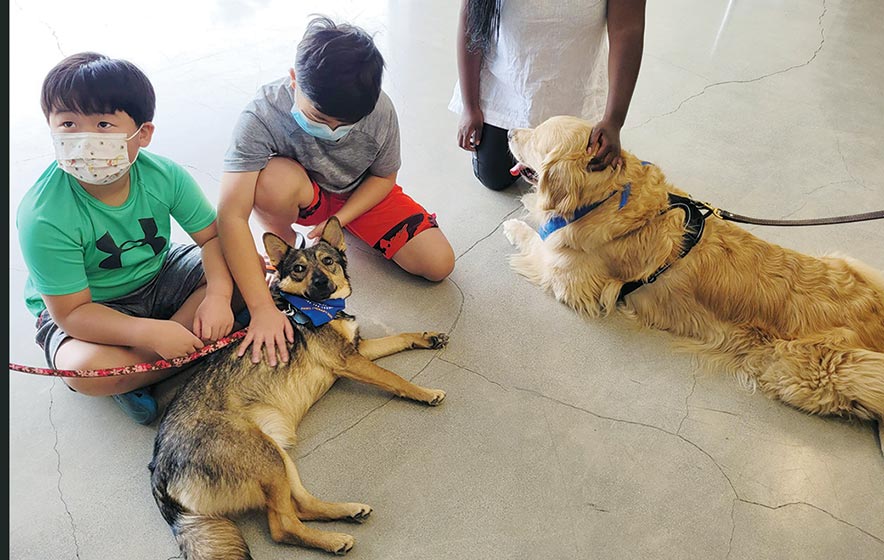 Courtesy photo | Misty Marlin
Former rez stray Sage, left, provides some cuddle therapy to two young travelers. “It’s a dirty job, but somebody’s got to do it,” she seems to be saying.

After the heartbreak of losing three elderly pets in one year, Misty Marlin of Orange, California, was ready to welcome a new family member, and she knew where he or she was coming from.

While living in Colorado, her daughter Kayleigh had fostered and transported for Blackhat Humane Society, which rescues and find homes for strays from the Navajo Nation. 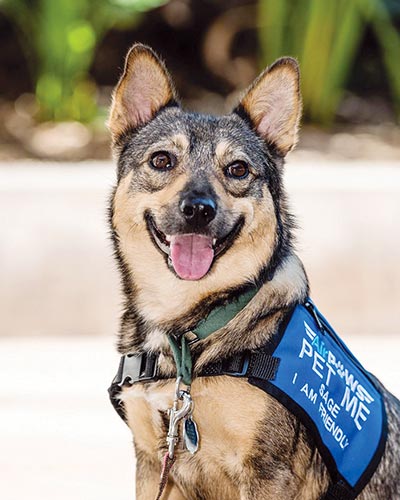 “All the Blackhat dogs we came in contact with were great dogs,” said Marlin.

Marlin asked her daughter’s friend, Sarah Groenwald, who was still fostering, to look for “a dog who’s friendly to everyone.”

Marlin was a volunteer with OC Animal Allies, which trains people to train their dogs as therapy animals and contracts with hospitals, nursing homes, etc., for pet therapy. She was looking for a dog she could train to help others.

It took a couple of months, but then Sage showed up at Groenwald’s home as a Blackhat foster.

Looking like a miniature German shepherd, Sage was the Will Rogers of dogs. She never met a person or animal she didn’t like.

Sage took to the therapy training easily, and before long she and Misty were deployed to a new program at the John Wayne Airport in Orange County called AirPAWS.

The pair would roam the corridors in search of people who looked like they could use some canine cuddles.

Folks who are stressed out over missing a flight or weary after a cross-country excursion light up when they see Sage’s cheerful little face.

“But you know who really likes her?” asked Marlin. “The TSA people. They have a stressful job.”

Sage lets everybody pet her, but every day she picks out a few favorites.

“There are four or five people who, when she sees them, she just plops down and offers them her belly to rub,” Marlin said. “I don’t know if she can tell they really need that, or if she just decides she likes them.”

Not only is Sage a great therapy dog, she’s an excellent recruiter.

“So I get to do what I was already doing and get paid for it,” said Marlin. “How cool is that?”

Normally there’s no sign of Sage’s tough past life as a struggling reservation stray, but occasionally it shines through.

“I think she was a gas station dog, because the only time she begs is when she smells Subway,” said Marlin. “It’s like it triggers something in her.”