“It is an honor to represent the Navajo Nation as an advocate for our people in the halls of Congress,” Charles-Newton said. 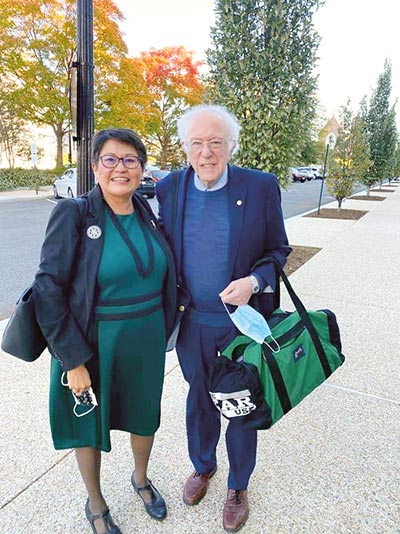 She also discussed the issues with officials of the Senate Committee on Indian Affairs and the Bureau of Indian Affairs’ Office of Justice Services.

In addition to sharing needs on Navajo, she gave updates on what the Nation was doing internally on these needs, which made the trip to D.C. one of the most productive she has ever had.

“One senator just came out and said I really applaud the way you approached this visit, and the homework that you’ve done and putting together all of this information,” she said. “It was a good outcome leaving the capital. I felt optimistic.”

Charles-Newton felt the success of her trip also reflected the momentum of the hard work and prayers of many Diné who have advocated for public safety needs in past weeks across the Nation and in Window Rock.

She noted that the Biden administration’s Infrastructure Investment and Jobs Act, which was passed by the House of Representatives on Nov. 6, and the upcoming Build Back Better Act will include more money for tribal justice systems, public safety, and infrastructure.

“As soon as the budget reconciliation is agreed upon and there’s funding in there for Navajo, we have to immediately go and start meeting with the agencies,” she said.

Speaker Seth Damon said the Nation continues to be at the forefront of policy making decisions that impact tribes at the federal level.

“We will push congressional leaders to pass the Build Back Better Act because this legislation is the largest investment for tribal nations in history,” Damon said.

Charles-Newton said she was pleased to say she finally received the funding formula the BIA uses to determine how much is allocated to tribes.

The four factors that BIA considers when funding public safety are crime rates, staffing levels and shortages, the size and land base of each tribe, and drug-and-gang-related activity.

However, she emphasized that how each factor is measured and whether data is accurate and current need to be understood.

“These four criteria are not really weighing in Navajo’s favor,” she said. “We have to remember, when BIA gets money, it doesn’t all come to Navajo. It gets distributed to 570-plus tribes based on the way that the funding is allocated.”

According to a recent Law and Order Committee report by Charles-Newton, the Navajo Police’s most recent annual crime report shows a disturbing increase in violent crimes —particularly homicides – at a time when the Nation cannot respond adequately to criminal activity due to a severe shortage of public safety resources.

Based on the most recent census data, the homicide rate on the Navajo Nation is four times the national average.

Her report states: “Only 120 Navajo Police officers patrol, and a mere 30 criminal investigators investigate the worst crimes committed against the Navajo people.

For example, she said Navajo does not currently have the capacity, in terms of both staff and technology, to track crime data and statistics and for which criminal investigators are asking.
Charles-Newton also proposed that other factors like law enforcement response times need to be incorporated in the formula.

The average response time on Navajo ranges from 30 minutes to three days, she said, and this is about half the averages for national and state officers per service area.

She said it’s important to evaluate what exactly causes those delays.

“It’s clear this formula needs to be updated to meet the needs of our Navajo communities,” she said. “We are pinpointing Indian Affairs and trying to say that BIA does need an increase in their budget so they can address some of the public safety and justice needs of the Navajo Nation.”

While the Navajo Nation Council has established the Department of Medical Examiner and a medical examiner position, which is now being advertised, the salary is not competitive and needs to be augmented, she said.

She also requested clarification of the BIA process for submitting requests for funds for public safety and justice projects, as well as the current list of approved projects which needs to be shared with stakeholders.

“If that list exists, we need to get a copy of it and see how many facilities need replacement and where Navajo falls on that list,” she said. “If we don’t know the rules and how to get on those lists, then we’re just going around in circles chasing our tails.”

Additionally, she said that more information is needed on available funding for operations and maintenance of public safety facilities, for which the BIA is responsible.

Charles-Newton noted that the Nation is in the process of working toward tightening the criminal code, which will likely lead to the need for more detention center facilities.

She proposed a consultation with IHS and BIA to share information and find solutions.

“What I did on behalf of the Law and Order Committee is say let’s meet halfway here,” Charles-Newton said. “Our people are being affected and we need to come up with some type of plan to address public safety and justice on the Navajo Nation.”

She said BIA indicated they are open to discussion about updating the funding formula and it was scheduled for discussion with the Tribal Interior Budget Council, which Charles-Newton also chairs.

“We agreed to put it on the agenda to discuss the tribal funding formula, and how it needs to be updated,” she said. “That’s the first step. It’s a win-win that we’re going to be talking about this with other tribes.”