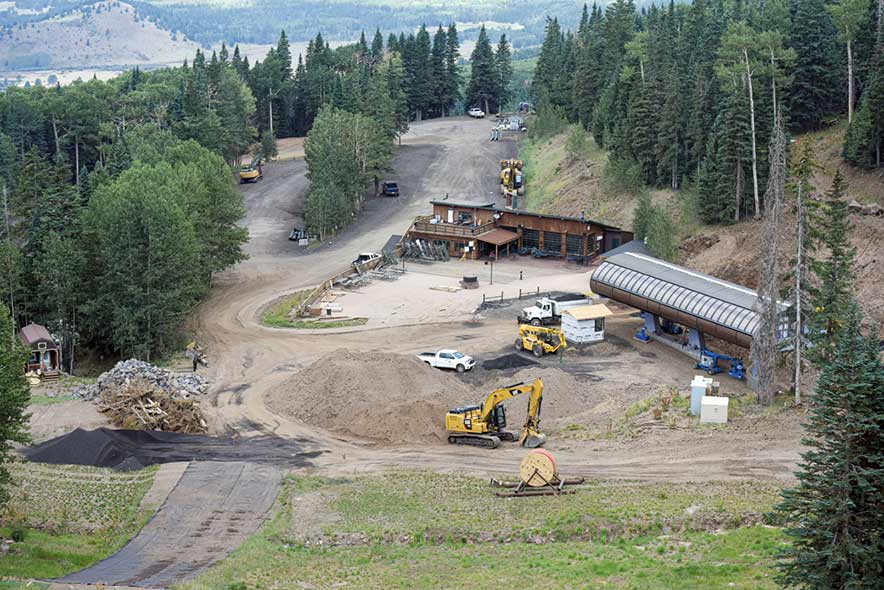 Special to the Times | Krista Allen
The installation of a new high-speed Agassiz Combination Lift is currently underway at the Arizona Snowbowl on Dook’o’oosłííd. The new lift will replace the old Agassiz Chairlift up to Agassiz Peak, cutting the ride time from 14 minutes to around 7 or 8 minutes.

The new high-speed Agassiz Combination Lift will be a game changer and it will completely redefine the Arizona Snowbowl experience, said J.R. Murray.

“Now people will have the ability to ride in a gondola cabin, so they’re going to be in a much more comfortable setting,” said Murray, the chief planning officer at Snowbowl. “It’s a new-style lift. There aren’t a lot of them in the U.S. They’re starting to become more popular.”

Snowbowl’s combination lift will be one of only six of its kind in the U.S. The lift will have six-person chairs interspersed with eight-person gondola cabins, which will take the place of the old Agassiz Chairlift, the “beating heart of Snowbowl,” that was installed in 1961 and then replaced in 1986.

After 34 years of continuous service, the old Agassiz Chairlift reached the end of its operations this year.

The Snowbowl team says times and fashions have changed, but the incredible views and the character of the lift have remained.

The team bid the old chairlift farewell in May and began the process of disassembling the chairlift in preparation for the combination lift construction that began in early June, when Snowbowl and Grand Junction, Colorado-based Leitner-Poma broke ground for the new lift.

Crews at that time started digging the foundation for the bottom terminal and lift towers, as well as widening the existing chairlift lines. This part, Phase I, of the project took at least two weeks before installation began.

In July, during Phase II, the old lift towers were removed, and concrete was poured – with the assistance of a helicopter – for foundations.

And parts for the new lift started arriving earlier this month. The gondolas also arrived after a two-month journey from France. Now, major work is set to begin on the bottom terminal.

“The concept originated in Europe and the cabins were made in France,” Murray said. “We’re really excited about the whole project. And the project will be completed by the beginning of ski season.”

The combination lift will transport passengers up to 2,000 feet of vertical in just seven minutes, less than half the time of the old chairlift. And the gondola cabins will be spaced between every two chairs.

“There has been a chairlift in this location since 1961,” Murray said. “Same corridor from bottom to top. The Agassiz Chairlift is the primary lift for the ski area providing access to 80 percent of terrain. The summer scenic chair ride has been operational since the late 1960s. There is not a ‘new use,’ only replacing old machinery with new.”

Murray said discussions about a new combination lift started over two years ago and the formal National Environmental Policy Act review process started about a year-and-half ago. This is required when a federal action is taken that may have impacts on the human and the natural environments.

The construction of the new lift is a considerable feat of engineering, said Murray. Once all the pieces of the lift are at hand, it goes up quite quickly.

Laura Jo West, supervisor for Coconino National Forest, announced on Feb. 28 that after thoroughly considering two alternatives presented in the Agassiz Chairlift Replacement Project’s environmental assessment, she decided on “Alternative 2 – Proposed Action,” under which the existing Agassiz fixed-grip triple chairlift would be replaced and upgraded with a detachable combination lift.

West said her decision meets the project purpose and need and is consistent with the forest plan.

“But because of the steep terrain here and the lack of roads on the mountain, we did some tree work to widen the corridor for the (new) lift,” Murray explained. “We did all that over the snow. We were really light on the land – a very minimal disturbance.”

Murray said this means that none of the San Francisco Peaks Ragwort plants – Diné bizaadk’ehjígo, Ch’ilbilátahaltsoi, in general and Ch’ilaghání, the name medicine men and women use in public – were in any construction zone.

“The plants are doing well, the population has increased in the past decade,” Murray said in an interview with the Navajo Times.

The medicine people say replacing the Agassiz Chairlift would not only damage the land, but would also alter the world order.

Murray said Snowbowl, along with the U.S. Forest Service, consults with all neighboring tribal governments. And the Coconino National Forest has a good relationship with neighboring tribes.

“Snowbowl works diligently to respect the tribal concerns,” Murray explained. “However, the land allocation is designated for a ski area with year-round use and that is how the land is managed. We find tribal members that oppose, but many do not. We have Native American employees and guests. We (also) provide ski program with many Native youth. The outreach does not stop.”

And that has not stopped since 1938, said Murray, who’s held many titles, including general manager of Snowbowl at one point in time. Snowbowl has been in operation under a special use permit from the Forest Service at the present site. That permit covers 777 acres.

Leland Grass, president of the Diné Medicine Men Association, said he talked with Murray earlier this year during one of the Agassiz Chairlift Replacement Project hearings.

“He stated to me that he and (Snowbowl) have been hauling pine trees (for firewood) to the Hopi Nation for years, either selling or donating them,” Grass said. “I never contested with him at that time when we were talking because we were ready to go into a meeting. It almost seems that Snowbowl has been trying to make up with tribal nations on the mountain issue by reselling or donating the environmental sacred items back to the tribes.”

Grass said those sacred items belonged to Natives long before Snowbowl came around and ski officials either selling or donating items such as precut firewood is patently absurd.

“The trees are a sacred being, the indigenous people don’t bother with sacred items that are touch by lightning, tornadoes, wildfires – the environment that is touched by the sacred item (such as) smoke, et cetera,” Grass said.

“Because if (we) do, it will make us sick in health or disfigure the harmony of daily life of a person, a family, or relatives later in life,” he said.

Murray said Snowbowl management has traveled to and visited with Navajo chapters and with Hopi villages, as well as other neighboring tribes, for decades.

“Recent outreach to all 13 tribes occurred within the past year,” Murray said. “But only two tribes could not meet because that’s when the coronavirus hit. Meetings have been extremely difficult to schedule due to COVID.”

Murray added that the new master plan will include an educational and interpretive element to better educate guests of the cultural values of each tribe. This means that tribal participation will be vital to make this work.

The new Agassiz Combination Lift will open in November.