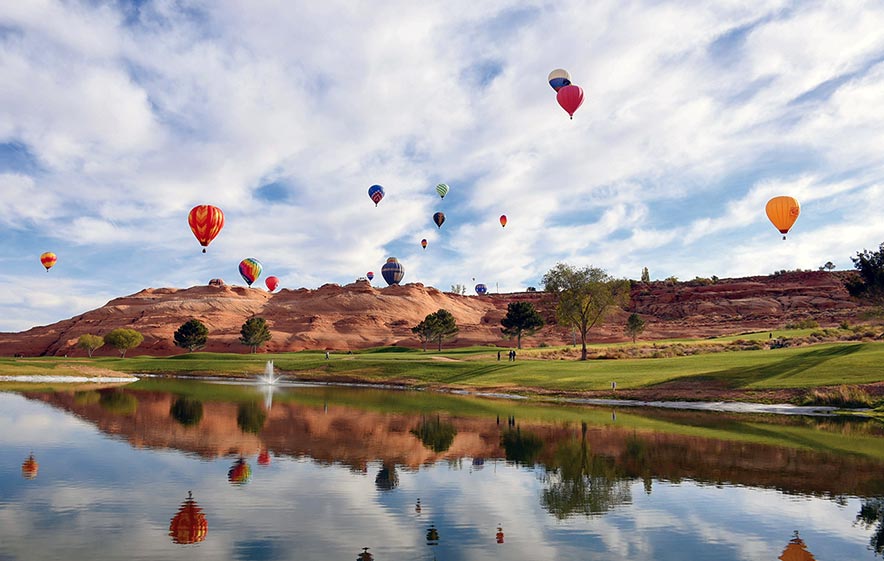 Navajo Times | Krista Allen
Hot-air balloons float above as they reflect in the water below at the Lake Powell National Golf Course on Saturday morning in Page, Ariz.

By Steven Law
Special to the Times

The first balloon pilots arrived at the golf course as morning’s first light fell upon the Vermilion Cliffs painting them dark pink, the color of purple stretched too tight.

The pilots and volunteers smelled coffee and freshly cut grass as they walked to the information tent, where they would learn the day’s weather conditions and get paired with chase crews. Frost on the grass melted to quarter-carat dew drops as the sun rose higher, and pilots were paired with chase crews and enthusiasts wishing to land a slot in a balloon basket.

One first-time ballooner was Camille Boone from Kaibeto, Arizona. She works at Page Middle School as its registrar. She was grouped with Patrick Nils, a balloon pilot from Tucson. 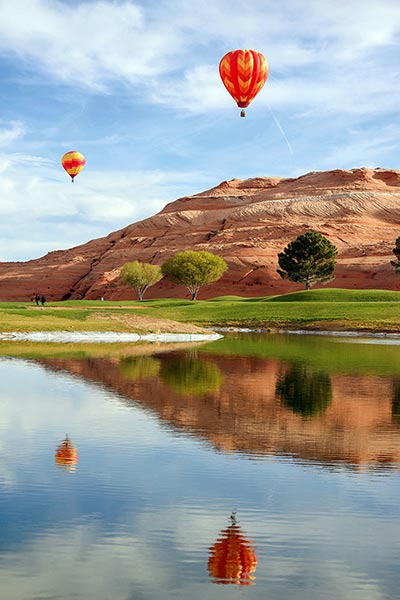 Navajo Times | Krista Allen
Two hot-air balloons float above as they reflect in the water at the golf course during the 19th Annual Page-Lake Powell Balloon Regatta on Saturday morning in Page, Ariz.

“It was so much fun!” Boone said after the flight.

With a light breeze blowing west to east, many balloon pilots chose to launch from the Page Municipal Golf Course, which lies on the city’s west side. She was among the first groups to launch Saturday morning. In addition to the pilot, she shared the basket with Mercedes Rodriguez, a bartender who moved to Page in August.

Boone and Rodriquez spent about 20 minutes aloft, during which time the breeze carried over the center of Page.

Boone was impressed by how smooth and gentle the flight was and how quiet it was as they glided over Page.

“I asked our pilot a lot of questions about ballooning,” Boone said. “He was awesome. He was very nice, outgoing, and answered all the questions we had.”

Their pilot set them down on South Navajo street. During Balloon Regatta weekend, Page residents know to drive slower and be aware of pilots landing their balloons in city streets, fields, and open spaces.

After landing on South Navajo, Nils was met by his chase crew. Boone and Rodriguez got out of the basket, and two more people got in. During the morning, Nils made four trips into the air above Page, giving rides to eight passengers.

In Page, the Balloon Regatta also makes an excellent spectator sport. Residents watch balloons pass overhead from their front porches and backyards; some lay in hammocks with coffee or mimosas nearby. One group of enthusiasts watched from a row of camp chairs they had placed on the peak of their roof.

This year’s regatta featured 61 balloons, with pilots and crews coming from all over the southwest United States. The biggest day of Balloon Regatta weekend was Saturday, including the Street Fair all day, and the balloon glows that evening.

After months of planning and preparation, Ptacek was proud of how well it turned out.

“I feel like it was super successful,” she said. “It made me very happy to see so many people out having fun, enjoying the balloons. I’m already looking forward to next year.”

In addition to the hot-air balloons, the Page-Lake Powell Chamber of Commerce operated a street fair on Saturday. This year’s street fair had 89 vendors and booths, eight bands, a beer garden, and numerous bounce houses and slides for the kids. It was the most prominent street fair the chamber has operated, and it produced the largest crowds in the event’s history, said Judy Franz, executive director for the chamber.

The City of Page blocked off Elm Street from vehicle traffic between Lake Powell Boulevard and 6th Ave. The vendors set up their tents, booths, and food trucks on either side of the street for foot traffic. The stage, beer garden, bounce houses, and slides were set up next to it on the south end of block 17.

The new arrangement and closer proximity allowed for an easily navigable, better flow of pedestrian traffic than in previous years, which both vendors and festivalgoers appreciated.

The City of Page and the Chamber of Commerce have been trying to move the street fair to Elm Street for three years, but it couldn’t find electricians to run the electrical.

The City of Page put out a new bid again this year and found someone to do it, said Franz. The contractors finished installing the electrical boxes just three weeks ago.

“It was a lot of work, but it was all worth it,” Franz said. My board and team did such an amazing job. They all knew what had to do, and they got it done. “I was really proud how well it turned out.”