By David Smith
Special to the Times 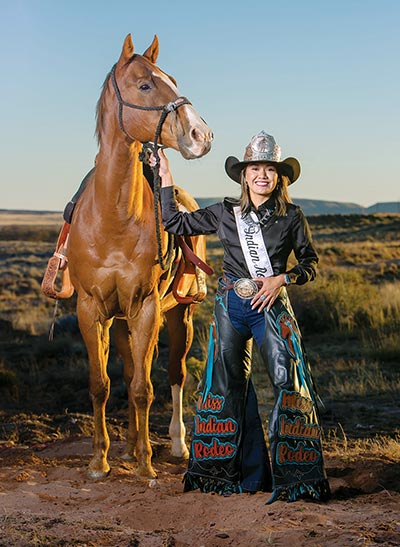 Courtesy photo | Derrick Yazzie
Sharaya Edgewater of Greasewood Springs, Ariz., enters her first rodeo pageant at the Indian National Finals Rodeo. Later she was crowned the association’s queen. She is pictured here with her horse, Link.

Sharaya Edgewater thought it was a long shot, but as the Covid-19 Pandemic restrictions slowly lifted, she was determined to do what she wanted in life.

One such thing was to enter the Miss INFR Pageant, even if she had never done such an event before.

But through her dedication, hard work, and help from her family, she won her first rodeo pageant in the national competition for Miss INFR.

“It’s very exciting,” Edgewater said. “It’s something I wanted to pursue, not exactly the INFR Miss Indian Rodeo title, but just something I wanted to try to do when I was younger, like running for a rodeo queen. So, getting this (title) at this level, I’m very proud that I was able to do it. And it makes me very happy that I’m able to represent the Navajo Nation.”

All her life, she grew up around rodeo, traveling with her family, and growing a love for horses. She was in the second grade when she first started competing in barrel racing. Years later, she’d become a five-time qualifier for the INFR barrel racing competition and won other achievements like Year End Champion for several different associations.

For Edgewater, rodeo helped build relationships among people, making it like a family, and she enjoys spending time with the horses and other animals. Rodeo also taught her responsibility, patience, and other virtues she carries with her when out of the arena.

After graduating, she went to college: first to Central Arizona College, where she was part of the college’s rodeo team before transferring to Arizona State University. During this time, she decided to put all her focus into her college studies and took a break from rodeo.

However, this break went longer than intended when Covid occurred, and many businesses and activities were closed. It was nearly two years until restrictions started to lift and, in that time, Edgewater was determined to pursue her goals and dreams before life passed her by.

That included qualifying for the INFR barrel racing competition again and trying out for the Miss INFR pageant. 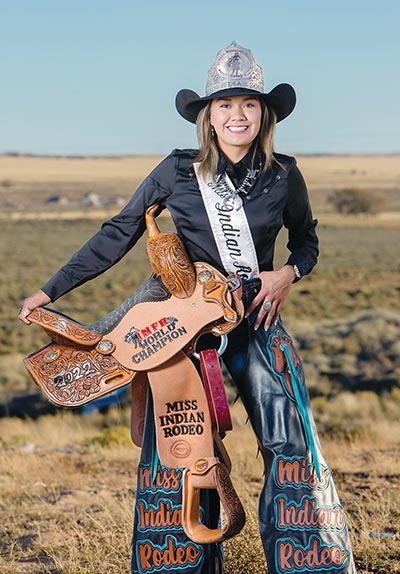 Her aunt, Charmaine Edgewater, is the former Miss INFR of 2006 and a source of inspiration for Edgewater wanting to try out for the pageant. When she was younger, she always wanted to try out for a rodeo pageant, and when she saw a chance to compete for the Miss INFR title, she took it.

Despite being an underdog in the competition, her aunt helped her prepare for the pageant, going over questions that may be asked, helping her practice for the horsemanship competition, and doing the traditional presentation of Navajo clothing, history, and culture.

Edgewater was nervous as she went through the competition, especially when she compared herself to her competitors. Almost all of them had experience in rodeo pageants, and Edgewater was among the few to compete in the pageant and rodeo events.

Despite that, Edgewater soon garnered enough points to put her ahead in the pageant, with horsemanship being her best category.

After four days of the pageant and on the final night of the rodeo, Edgewater was crowned the 2022 Miss INFR.

“It was definitely a shock,” Edgewater said. “I think not only shocked to myself and my family and the people in the rodeo community because it’s not very common for people who participate in rodeo to also pursue rodeo queening.

For Edgewater, one of the challenging parts of the pageant was also one of her favorites. That was when she stood before an international crowd and represented the Navajo tribe. Before other tribal members from across the U.S and Canada, she shared Navajo traditions and beliefs.

She anticipates her time as queen will keep her very busy this year. In addition to her duties as Miss INFR, she is still a competing barrel racer. After opening a rodeo, she had to quickly change into her gear and try to prep her horse for the competition, but she was sure she was ready for the challenge.

In addition, she is also a graduate student working as a clinical laboratory scientist in a hospital, working toward getting her master’s in public health. She already got her bachelor’s in biochemistry.

It is a lot on her plate, but after living through the worst of the pandemic and knowing she was reaching the cut-off age for the pageant, she wants to pursue her goals and dreams before she gets older and hopes her success reflects the best of her family and people.

“I just like to give thanks to my parents, my mom Clarissa Edgewater and father Samuel Edgewater, as well as my aunts Claudia and Charmaine,” she said.

“My whole family was very supportive of my decision to pursue this. They were confused as to why I want to pursue this because it’s not something I’ve ever mentioned before. But they were all on board. They knew I was I was capable, that I could win it, and they were confident in me, so having their support to help take care of my animals, helped prepare questions, helped me pick out outfits; it was very helpful, and I appreciate it very much.”