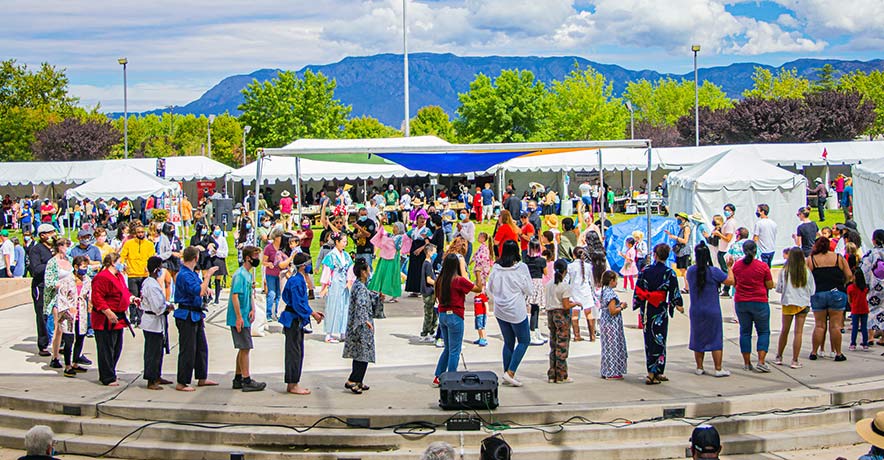 Navajo Times | Cyrus Norcross A Japanese folk-dance group, led by Edelman Sensei, performs the Bon Odori Dance with the audience's participation. The dance is associated as a summer activity rather than a religious occasion.

Outside the New Mexico Veterans Memorial, the sound of a taiko (Japanese drum) accompanied by plucking of the shamisen (Japanese guitar) echoe across the parking lot.

Inside the memorial, people can smell Japanese hotdogs, see individuals wearing kimonos (traditional Japanese attire), hear the sounds of wooden Japanese sandals hitting the ground, and learn to make origami at one of many interactive booths.

This event is called Aki Matasuri, which translates to fall festival.

The Aki Matsuri has been ongoing for 40 years and is sponsored by the New Mexico Japanese American Citizens League. The league’s mission is to promote, protect and fight for the civil and human rights of all people in and outside New Mexico.

Due to the coronavirus, Aki Matsuri did not take place in 2020 and many members were unsure it would take place this year. 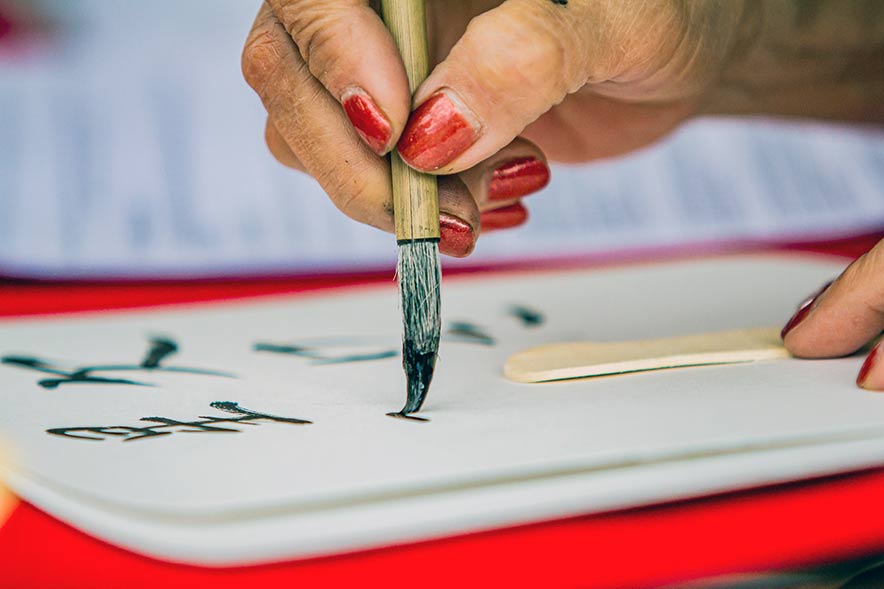 Navajo Times | Cyrus Norcross
The writing of hiragana can be a form or art in Japanese culture called “the art of shodo” (calligraphy). UNM Japanese instructor Machiko Bomberger brought members of her class to participate in the 2021 Aki Matsuri Festival.

After a year and wanting to help the Albuquerque community recover from the slump of the pandemic, league members decided to go all out with Aki Matsuri, providing a day of festivities. Members embraced the symbol of the frog or Kaeru.

In Japan, the frog is seen as good fortune and because the Kaeru also means “to return,” travelers carried frog amulets for a safe return home.

This year Aki Matsuir embraces the theme of the Kaeru, “the way to return” or the way to celebrate life without thinking of the pandemic.

Honorary Japanese Consul General Davis Begay said, “I’m surprised with the turnout of this. The parking lot was full and we had to shuttle people here.”

Treasurer Calvin Kobayashi said, “We had no idea what we were going to come up with. I thought if we could do three-quarters of what we did in 2019 that would be good.

“But we blew a way those numbers,” he said. “People want to be social and are tired of COVID.”

University of New Mexico Japanese Instructor Machiko Bomberger said, “This is so much fun for me. I am happy to see the people who want to learn more about my Japanese culture. It is wonderful to see different worlds, different cultures interact with each other and learn from each other.” 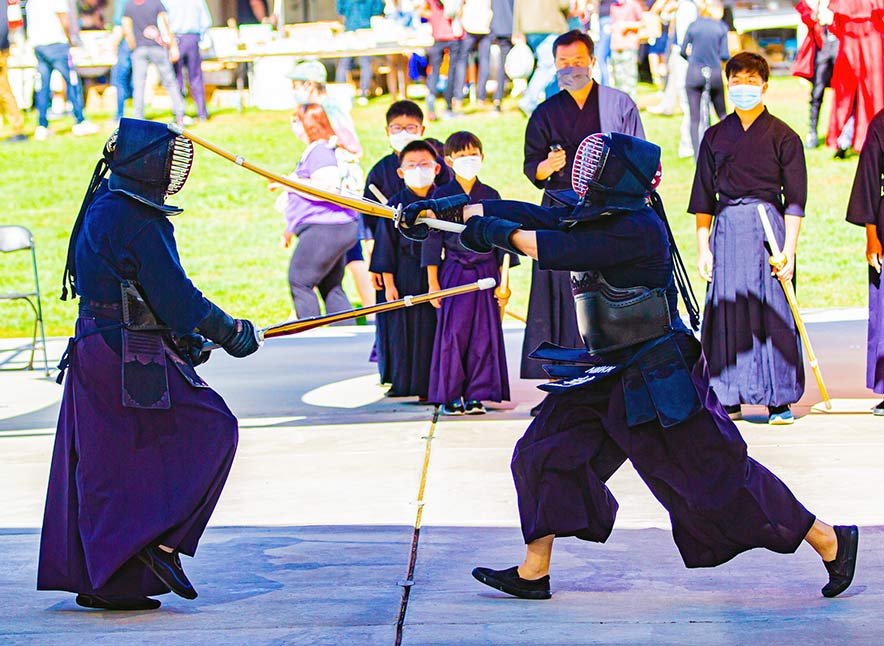 Begay spoke about the similarities between Japanese and Navajo cultures.

“There are two types of religion in Japan – Shinto and Buddhism,” he said. “Shinto religion is similar to Navajo beliefs. Entities or spiritual beings inhabit all things, and respect many aspects of life.

“Just like how Navajos respect animals and nature, Shinto respects nature and animals,” he said. “Shinto has many different gods for different aspects of their lives, just the same as Navajo culture.”

Begay was awarded the Order of the Rising Gold Rays with neck ribbons for his contributions promoting exchanges and friendship with Japan and the United States. The award was established in 1875 by the Emperor Mejii.

For the Navajo people who aspire to visit Japan, Begay said, “The Japanese people are very open and friendly. Very different from American culture. They will treat you very well.
Enjoy the place.”