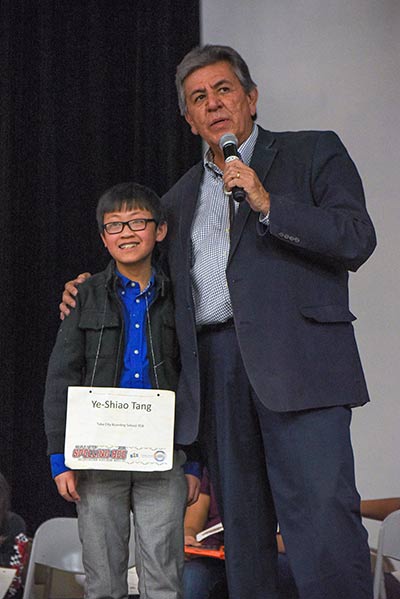 Seemingly unfazed by the crowd and the judges after Round 8, during which Ye-Shiao Tang approached the microphone and correctly spelled, “raspberry,” the gifted 10-year-old from Tuba City Boarding School then remained at the microphone for the anticipated championship word in Round 9.

His parents, Hu C. Tang and Khanh L. Tran, and his 9-year-old sister, Jasmine, all cheered and waved from their seats inside the Nash Center at Monument Valley High.

The winning moment is what Ye-Shiao wanted for a long time, said his father, Hu, a family physician at Tuba City Regional Health Care Corporation, where his mother, Khanh, is also a pharmacist.

Ye-Shiao and Jasmine were both born and raised in the Navajo Nation.

Hu said Ye-Shiao constantly prepared for the 2020 Western Navajo Regional Spelling Bee, during which he was crowned champion for the fifth-grade competition in February in Tónaneesdizí. Even after his win, he put in more hours to prepare.

“This is my second time I’ve been here now,” Ye-Shiao said in an interview on Thursday. “I practiced with my mom and my dad. They helped me a lot and they helped me with vocabulary tests.”

“Mostly mom,” Hu said, adding that most of the credit goes to Khanh.

Ye-Shiao received a JBL Charge 3, a portable Bluetooth speaker, from both the Navajo Times and the Office of Diné Youth. He was also awarded The Samuel Louis Sugarman Award, a 2020 U.S. Mint Proof Set, which was donated by Jay Sugarman, chairman and CEO of iStar Financial; a one-year membership to Britannica Online Premium, which was donated by Encyclopedia Britannica; and a subscription to Merriam-Webster’s Unabridged Online.

Ye-Shiao will be competing in the 2020 Scripps National Spelling Bee in National Arbor, Maryland, at the end of May.

Ye-Shiao, along with a parent or a chaperone, will be sent on an all-expenses-paid trip to the Washington, D.C., area where they will stay at the Gaylord National Resort and Convention center, a first-class waterfront hotel, during the weeklong competition.

“We want you to go over there and visit all the sites that you can, see the city, see all the monuments,” Navajo Times CEO/Publisher Tom Arviso Jr. told Ye-Shiao. “Congratulations! I’m really proud of you. And I know you’re going to make us proud.”