KC girls to play Los Lunas in 4A title game

Thursday was just another day of handling business for the Kirtland Central Lady Broncos.

Despite many distractions, or the lack thereof in Dreamstyle Arena, the second-seeded Lady Broncos defeated No. 3 Portales, 58-48, in the Class 4A girls state semifinals. 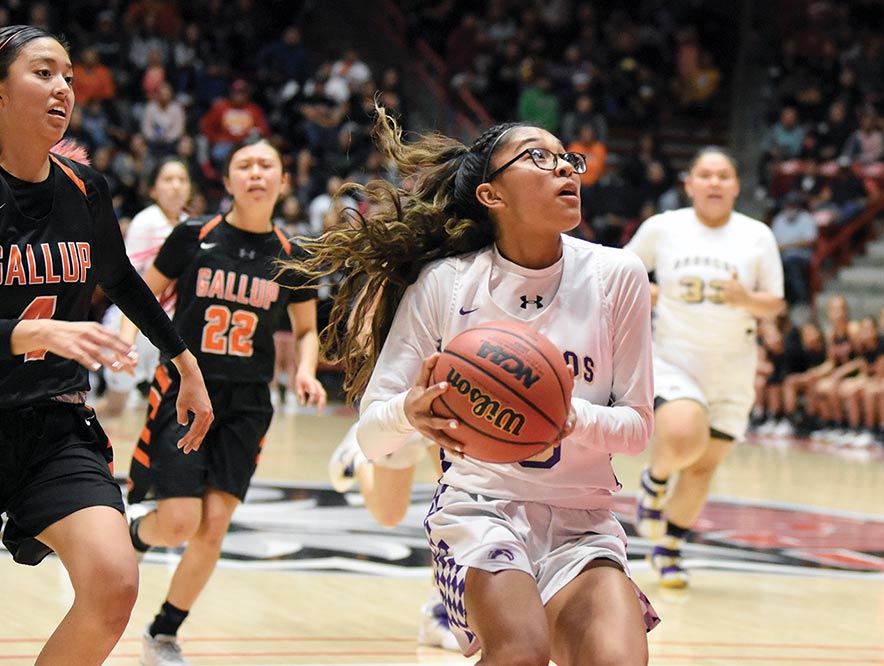 File photo Kirtland Central’s Aisha Ramone takes the ball to the net on Tuesday night during the quarterfinal game against the Gallup Lady Bengals at the Dreamstyle Arena in Albuquerque. KC plays Los Lunas in 4A title game.

Kirtland Central head coach Devon Manning said it was all business for his team as they worked to secure another chance to meet No. 1 Los Lunas, who they fell short to in the finals last season.

He said little was mentioned about the near-empty arena as New Mexico Activities Association officials banned fans from attending the rest of the state tournament.

“We didn’t really talk about,” he said. “The only thing we did say was ‘yeah, the fans aren’t going to be there,’ but it was all basketball.”

Kirtland Central went right to work in the first quarter putting up the first two baskets to secure the 3-0 and extended it to 14-8 after one quarter.

Portales worked both the inside and outside, looking for opportunities to keep up with the Lady Broncos.

Manning said his team was well aware of Portales’ abilities, but his team mostly focused on themselves and their game.

“We knew that Portales was going to do, they run a tough man-to-man, the toughest we’ve seen all year,” he said. “We knew they had their bigs, we knew they had shootings outside. We just stayed with what we do best.”

Kirtland Central leaned on their defense to take care of most Portales’ strong points, but the Rams managed to sneak a few in, especially going into the half. Lady Broncos led 23-20 at the half.

Kirtland Central kicked things off with a 6-0 run in the third quarter and gained leverage to lead 31-24. They ended the quarter with a 9-0 run to lead 42-29.

Manning said his team took advantage of Portales’ mistakes, which opened up opportunities for them.

“We knew they were a scrappy bunch,” he said. “We got some stops that led to some baskets, that kind of opened some baskets for us. It kind of snowballed a little for us in the third.”

Portales worked to get back within range, knocking down a few three-point baskets, but it wasn’t enough. Kirtland Central’s defense continued to hold them together and carried them to the 10-point victory.

The win advances the Lady Broncos to the finals with No. 1 Los Lunas. The game is a rematch of the finals last season with the Tiger defeated Kirtland Central for the title. The two teams will play at Dreamstyle Arena at 7 p.m.

Manning said his team is prepared for the Tigers and know they’ll have to play their best basketball.

“They’re not just going to hand the trophy to us, we’re going to have to go out there and earn it,” he said. “They’re a very well-coached team.”

Manning said his team has the experience needed to match Los Lunas, which should make for some fairly even basketball.

“I think the experience factor will help us out, being there last year. I don’t think they’re going to be quite as overwhelmed going into that game,” Manning said. “Los Lunas has been there done that, we got to match that experience.”

Should the Lady Broncos finish victorious, it will be their 20th state title.