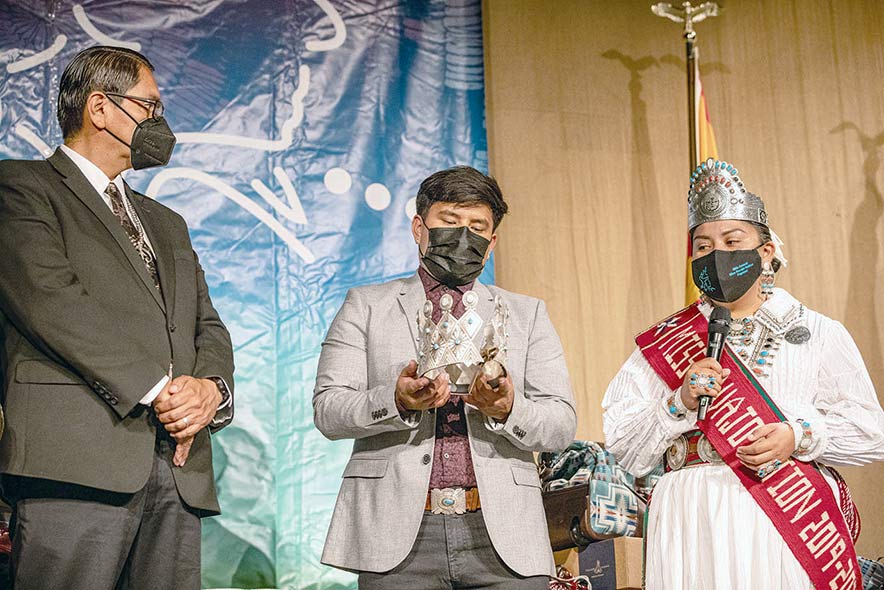 Matthew Charley was having coffee one early morning when the design for the new Naabeehó Bich’eekį’ crown came to mind.

Charley, a fourth-generation jeweler and silversmith, said inspiration to create the crown hit him just before sunrise at his home in Bread Springs, New Mexico, on July 10.

“I wanted to make it elegant,” said Charley, who created a distinctive head ornament for the 2021-22 Miss Navajo Nation.

Miss Navajo Niagara Rockbridge was coronated three weeks ago during the 69th annual pageant in Tsébigháhoodzání.

The crown that Rockbridge wears is made up of 20 pieces of Egyptian turquoise and 10 pieces of mother of pearl (nacre) set in sterling silver, weighing 29 ounces (1.81 pounds).

It has 10 oval points on the base each supporting conchos.

“A lot of thought went into it,” Charley said. “Even the material.”

When Miss Navajo’s office over the summer hired Charley to create the crown, he accepted the job immediately and began the illustration of the crown.

“I didn’t know what I wanted to do at the time,” Charley explained, “but I knew I wanted to change the crown.”

“The only request was to have the mother of pearl incorporated into the design,” Charley said. “I wanted to use traditional techniques to create the crown.

“The Navajo, what we’re renowned for are our jewelry and our art,” he said. “That’s what I wanted to showcase through the crown. I wanted it (to depict) ‘Navajo’ from a distance when (one) looks at it.”

The Miss Navajo Nation crown has evolved through the years, changing more than 15 times over its 60-plus-year history.

And now it has changed again, bringing with it a new era and a generation born after the millennials that are emerging as the next big thing for the Nation.

“When there’s change, there’s also going to be opposition to it,” Charley explained. “But I don’t mind all of that.

“I’m excited with what (Rockbridge) is going to do with (her) title and with the crown,” he said. “I’m just happy to be part of it all.”

Charley spent 200 hours over a month creating the crown at his home. His father, Lee, also took part in the creation. Lee created the Navajo Nation seal for the crown. 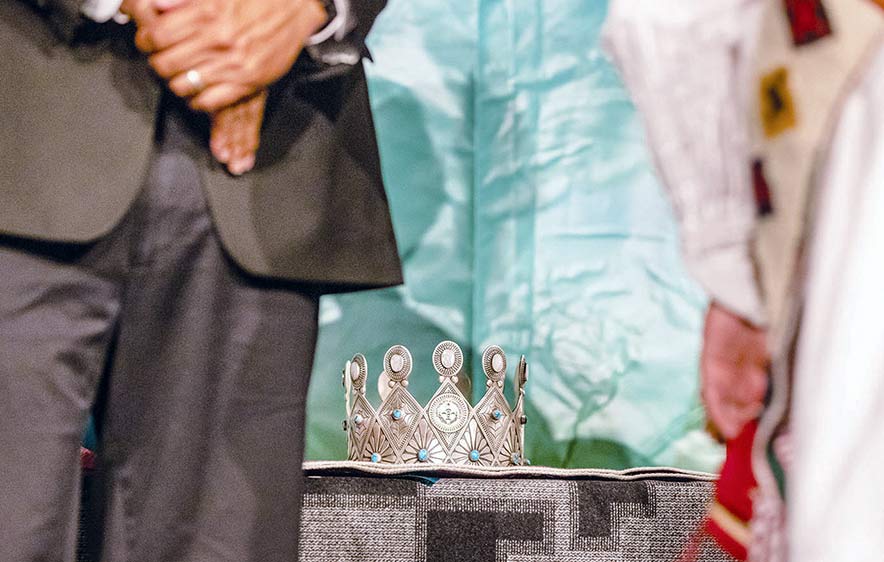 Special to the Times | Sharon Chischilly
The Miss Navajo Nation crown is placed on a stand during the crown unveiling at the Navajo Nation Museum on Sept. 11. Twenty-two-year-old Niagara Rockbridge from Piñon, Ariz., was crown with it, which was created by silversmith Matthew Charley, during the 69th annual Miss Navajo Nation pageant in Window Rock.

Charley grew up in Diné Bikéyah and learned to silversmith from his family – parents and maternal uncles – over the course of 12 years. He was one of the children who sold their work, such as pendants and rings, for $5 a piece inside restaurants in Na’nízhoozhí.

But it took Charley a lot of prayers and earnest requests to help him invest in his artistic gift because he’s always envisioned himself as a silversmith.

“That’s how I initially got my gift,” Charley said. “I prayed for it.

“A lot of praying goes into my work,” he said. “That’s who I am as an artist. I consider it a gift and I’m really blessed to … make things like this.

“It’s very unique,” he said. “I feel very connected to my people when I create Navajo jewelry.”

Charley said Rockbridge’s crown was not only created with a pure mind but also good intentions because a Miss Navajo meets dozens of people on a daily basis and represents the Nation.

“I wanted to give (Rockbridge) confidence as well, amongst other royalty,” Charley explained. “There are a lot of intentions behind the design.”

Charley said his work is a traditional old style, meaning he creates high-quality, heavy-gauge jewelry such as using stones he obtains from international stone and gem shows.

“With every new project, I just want to improve,” he said. “I want to be better. I always want to perfect my craft.

“What we create is very unique to the world,” he said. “So, it’s very exciting for me. It’s a huge accomplishment and a milestone in my career.”

Charley added that he incorporated the web of Na’ashjé’ii Asdzáá around each turquoise. He also integrated Diné deities and Yoołgai Asdzáá.