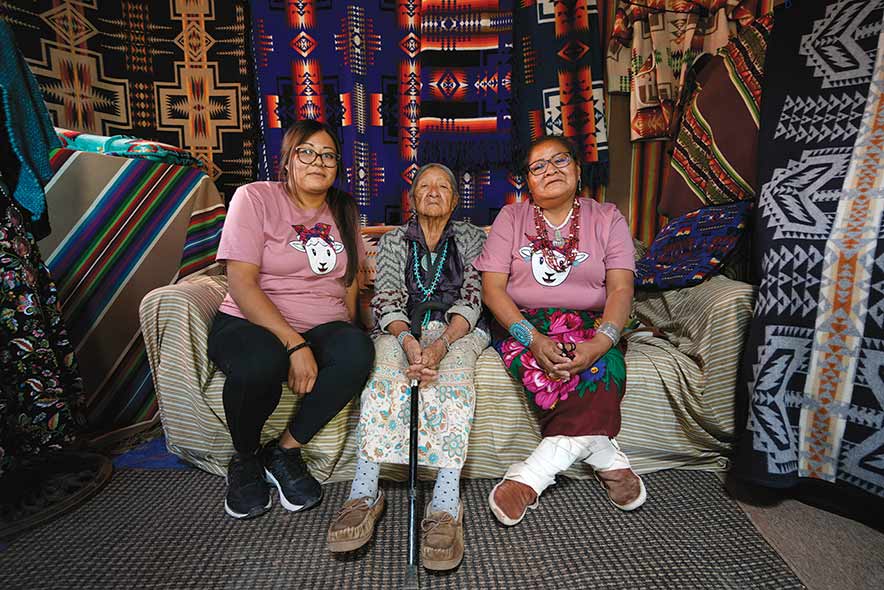 Emily Malone, 56, from Tsiiyi’ Tóóh, remembers having to carry buckets of water back to her home so the family could have drinking and cooking water.

She remembers it was a hard life. She remembers her mom weaving rugs that she took to the Thunderbird Lodge, the site of a trading post built in 1896, for trade.

“And that’s how we were raised,” Malone said.

Her mother, Rose Yazzie, 82, adds she wasn’t given money for her woven rugs.

“How much the rug was worth was written on a piece of paper,” her mom, Rose, explained. She speaks only in Navajo.

“The trade was for only food,” Rose said.

She used to trade her rugs at the trading post for food and other goods, Malone echoed her mother.

“From my mom’s weaving, that was her only income,” Malone reminisced. “It was kind of hard for us. We were kind of like, really poor.”

During the summers, Malone said they used to hike down to their summer home next to Tsé Na’ashjé’ii, the famed tall sandstone popularly known as Spider Rock.

“We’d carry groceries down there, a month’s worth,” Malone said.

Malone said they would go down the canyon to their summer camp in April. Since they attended school, they’d hike back to the top of the canyon to catch the bus every day.

Sometimes, if the daily hike became too much for them, they’d stay on top during the school season, said Malone.

“At the base of the Spider Rock, there’s a hogan. We’d live there for a few months,” she said. “Then, after a while, we moved to another location about four miles further where we grew peaches up to September.”

This was the lifestyle Malone fondly remembered, and it was also where she learned the art of rug weaving.

“I was nine when I learned how to weave,” she said, adding that she learned at their second campsite, Didzétsoh, where they grew peaches.

Malone said she watched her mom and sisters set up their looms using the cottonwood trees at the bottom of the canyon.

She told her mom she wanted to learn how to weave. One day she said her mom sat her down and began teaching her. 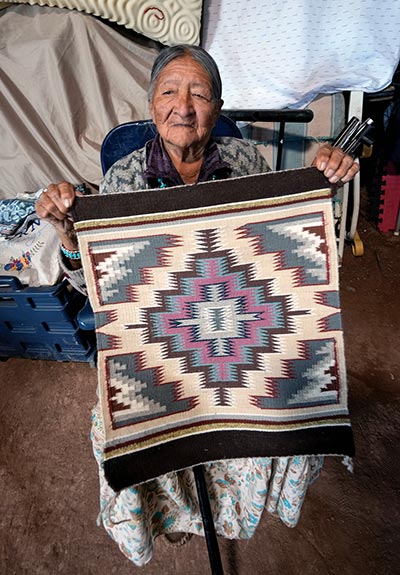 Navajo Times | Donovan Quintero
Weaver Rose Yazzie, 82, who has been weaving for most of her life, holds her rug on April 15, in Tsiiyi’ Tóóh, Ariz.

Through elementary school and high school, Malone weaved. And 47 years later, her fondness for weaving has not waned.

This dedication to her weaving has taken her to many places.

Malone’s rugs caught the eye of Arizona State Rep. Jasmine Blackwater-Nygren, who said she wanted to showcase Navajo rugs during this year’s legislative session at the Arizona State Capitol.

Blackwater-Nygren said Malone and five other weavers were honored on Jan. 10, the first day of the Arizona legislative session in Phoenix.

In September, Malone – along with Mary E. Kee from Klagetoh, Mona Laughing and Charlene Laughing from Crystal, Amy N. Begay from Rock Point, and Craig Tabaha from Tsélání Springs – and 13 other weavers were invited to Twin Arrows Navajo Casino Resort to share their works to Blackwater-Nygren and Arizona House Speaker Rusty Bowers.

From the 18 traditional weavers, six were chosen and asked to produce six rugs that would be displayed during the legislative session, said Blackwater-Nygren.

“As a granddaughter of a longtime weaver and a weaver myself, I understand the importance of meeting directly with artists,” the state representative said in September. “I am humbled by the opportunity to bring our talented artists together.

“I am looking forward to the day when I can vote for the future of my state while looking at our Navajo rugs,” she added.

On the evening of April 15, Malone sat at her loom.

A sunray shone on her and her loom, illuminating the tiny pieces of wool lint that fly off the strings every time she hits them with a bee adzooí.

The silence in her hogan is broken only by the sound of weaving. 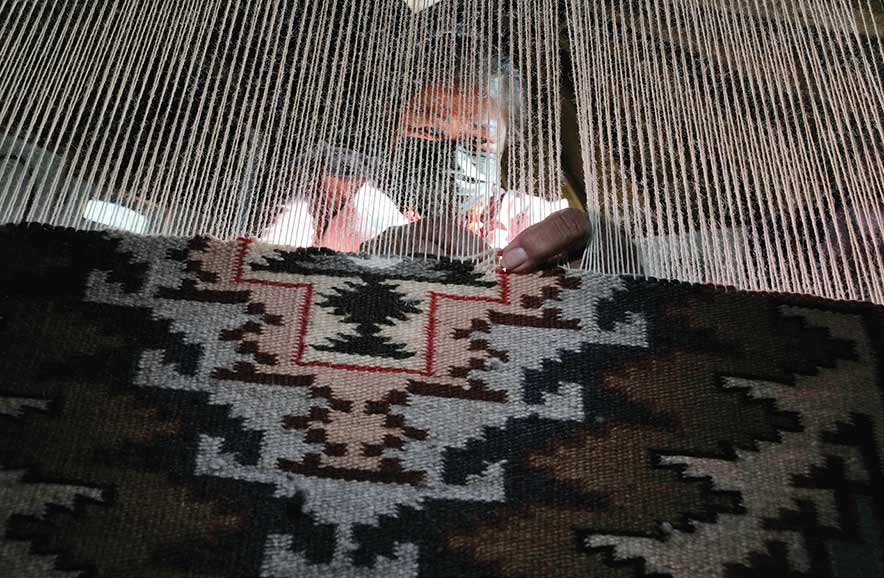 She makes it look easy, but it’s only because she has nearly 50 years of experience.

Her work at the loom also does not reveal the months of preparation, investment into her sheep, the hours shearing them, and days and weeks washing, carding and spinning the wool.

Nor does it reveal the time and patience required to dye the wool into the different colors she’ll use.

Unlike other artisans who usually buy their tools, Malone said she creates her tools from scratch, a task not many traditional rug weavers practice anymore.

Despite the difficulties and hardships involved in becoming successful at rug weaving, Malone taught her four daughters to weave so they could earn a living with it as she has.

Malone’s mother said she learned at 10 when her older sister began teaching her.

“I learned with my sister telling me how to weave,” Yazzie said.

Rose remembered a time in 1950 when visitors came down to their summer camp by Spider Rock.

“They came with an interpreter,” she said. “The interpreter told the visitors I was only 10 years old. And the visitor said to me, ‘I’ll buy your rug once you finish it.’”

Rose said she was still learning how to complete a rug’s final steps, so her mother finished it for her.

“When it was finished, we traveled by horseback to Chinle, where I sold my rug to the visitor for 12 dollars,” she said. “We used the money for food, which we brought home.”

The 82-year-old matriarch said she still weaves but hasn’t been lately because of an injury when she slipped and fell on her arm.

“The doctors told me not to use my arm so it can heal,” she said. “But it’s healing well, I’m told. In the meantime, my weaving tools are waiting for me.”

While archaeologists speculate, Navajos most likely learned the art of weaving from Pueblos and used wool collected from Churro sheep that were introduced to the area by Spanish explorers.

Malone and Yazzie make no mention of Western historical accounts.

To them, the traditional teachings instilled the songs and prayers into them, which helped keep them strong.

Malone said she sees that in her daughters: Lavera Blake Ambrose, Larissa Blake, Laramie Blake and Alyssa Malone – all of whom are accomplished weavers.

“Like how my mother taught me and how her teachings have taught me to have a strong and disciplined mind, I see it in my daughters too,” Malone said.

Malone said they lived in Las Vegas, Nevada, for about three years. While there, she set up their looms.

“We did it all through middle school, junior high, and high school,” Blake said.

As a result, Malone’s daughters were able to provide for themselves.

Blake added that her oldest sister, Lavera Blake Ambrose, paid her way through college with weaving.

Malone added to her daughter’s sentiment and said their works aren’t easy to create and, therefore, should not be treated as if they were cheap, manufactured rugs.

“I wish they could understand how it’s done,” Malone said of interested buyers. “It’s hard – very hard, from warping to finishing it. It won’t be made in just one day, and it takes time.”

Blake, who lives in Phoenix, said she doesn’t weave like she used to, and she now invests her time and energy into T-shirts.

Malone said her youngest misses weaving but can’t because of the demands of college life.

Overall, she said she wants to pass on her knowledge of weaving to the next generation while she still can.

Whenever the COVID-19 pandemic ends, Malone said she envisions teaching the art of weaving and jewelry-making from her hogan. Seeing kids out there, jobless and with no money, inspires Malone.

“They need money,” she said. “I wish I could teach them how to earn money. There are so many ways to earn a living out there.”

Rose, Blake’s grandmother, attributes her strength and happiness to weaving.

“When you’re weaving, there is a feeling of happiness inside you,” Yazzie said.

Malone’s rug isn’t complete yet. She sits at her loom, saying a prayer of thanks, and she envisions its completion. But until it’s completed, only she knows how it’ll come out.

While her daughter embraces a new approach to providing for her family, Malone will stick with the old. After all, a design she created in 1989, known as Burnt Water Rug, continues to influence other weavers.

And the rug that was honored at the beginning of the Arizona legislative session continues to influence Blackwater-Nygren and other state lawmakers as it remains on display inside the chamber.

Her family is known as the “Spider Rock Girls,” a name Bruce Burnham of R.B. Burnham & Company in Sanders, Ariz., gave them in 2022.

Her family endures the challenges of an ever-changing and evolving artistic mind that takes weaving to new levels.

Malone is at her most meditative state when she is weaving. Her bee adzooí pushes each string into its final position.

She runs her fingers over the strings. Her mother falls asleep near her, and her daughter listens quietly to the sound of her weaving.

With each string she weaves into place, Malone keeps the art of Navajo rug weaving alive and strong.

For Blake, hearing her mother weaving takes her back to when she was little.

“I remember hearing that too when my grandma wove when I was little,” she said.