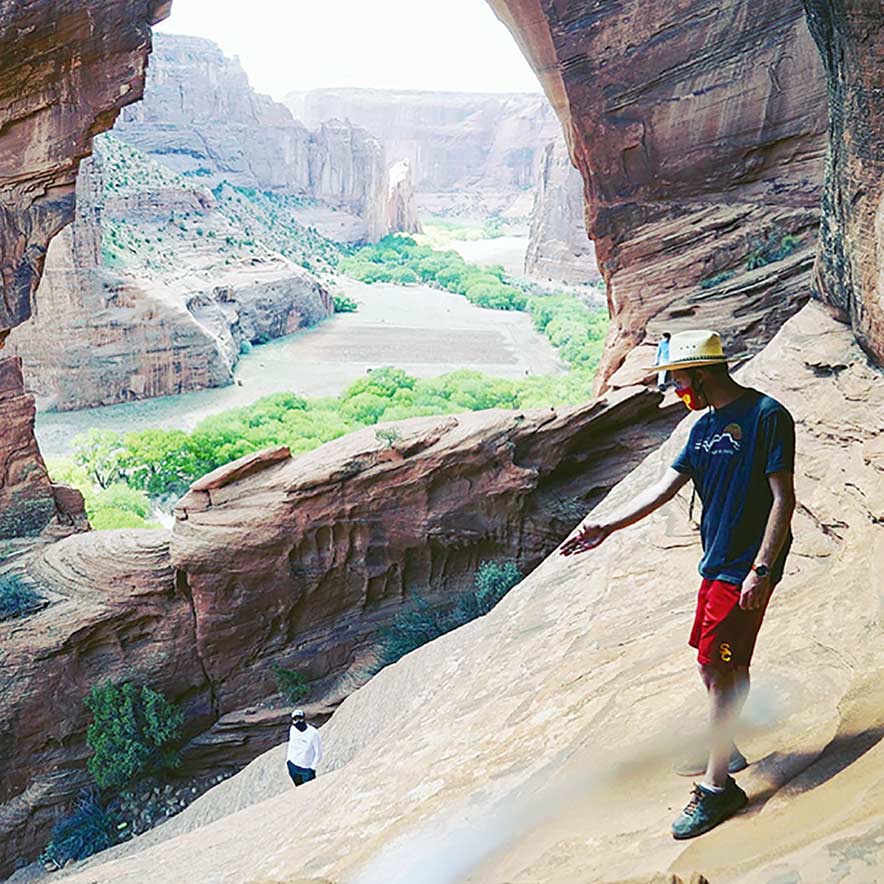 Courtesy photo
A member of a film crew directs where to shoot a scene during the filming of “Canyon del Muerto” in 2020 in Canyon de Chelly.

In her 1933 book, “Digging in the Southwest,” Morris, an archaeologist, wrote that the ships Columbus arrived on would sound like “the death knell” for the Indigenous populations and the country they called home.

Morris’s book is the inspiration for the film “Canyon del Muerto” by Coerte Voorhees, who directed and wrote the film that debuted at the 30th annual Arizona International Film Festival in Tucson on April 20.

The film tells the story of Ann Morris, who, along with her husband, Earl, excavated Mummy Cave and Massacre Cave from 1923 to 1929 and again in 1932 in Canyon de Chelly.

The inspiration that would turn into a film began developing for Vorhees, originally from Boulder, Colorado, while he volunteered at the University of Colorado Museum of Natural History at age 12.

While there, he remembered entering the university’s anthropology exhibit and seeing black-and-white photographs of Canyon de Chelly and archeologist Earl Morris.

His mother noticed how enthralled he became with the exhibit and suggested he read Ann’s books – she also wrote “Digging in the Yucatan” in 1931 – if he wanted to learn more about Earl Morris.

His interest quickly turned to Ann, and he decided her story needed to be told.

Visits to Canyon de Chelly also provided some of the inspiration for his movie.

While a graduate student at the University of Southern California School of Cinematic Arts, Voorhees made his first film, “The First Line,” with his brother John Voorheers.

The film was released on Netflix in 2016.

He received his master’s in film and television production and bachelor’s in history and classics in 2012 from Georgetown University.

Voorhees’ film is based on the pair’s excavations, which Ann Morris tells of throughout her book.

Mrs. Morris also drew many illustrations in watercolor, capturing details black-and-white photography could not catch at the time.

In her book, Ann Morris writes of Seechi, one of a few Navajos who worked for her husband.

She wrote that her husband wanted him to wear a mask for protection from the dust while excavating Mummy Cave, but he refused because “he would have none of this white man’s superstition.”

“The next two days, he was absent, but on the third showed up again for work. He said he had felt very sick – evidently a dust chill – and since this was clearly the work of the Anasazi devils, he called in the medicine man to cure him,” Ann Morris wrote.

Seechi told her husband he had to be cleansed in a sweat bath before returning to work.

He said the medicine man also recommended Seechi share the medicine he gave him with Earl and cover his face “as the white men did,” she wrote.

For Voorhees, he said the goal of Earl and Ann Morris was to establish the lineage of the Navajo people to the basket makers – Pueblo I and II. The Anasazi have that lineage directly linked to the land users and the folks who resided in Canyon de Chelly dating back to 600 A.D., which he portrays through the perspective of Ann Morris.

“In addition to that, they helped rescue many of the ruins in Canyon de Chelly that were falling into disrepair and were really about to collapse on itself,” Voorhees said.

“Tower House Ruin, in particular, was weeks away from collapsing on its own weight,” he said.

“If the Morrises hadn’t come in and reestablished the base with mortar, which they did with their Navajo crew,” he said the ruin would have fallen.

Voorhees focused on how the Morrises excavated Massacre Cave, which Ann wrote she and her husband were “intrigued” by “early in the game.” She retold how one night by a campfire, one of the Navajo crew members named Nelson, who spoke English, told the story of Massacre Cave that occurred in the winter of 1804-1805.

Spanish soldiers had cornered and massacred Navajos who sought refuge in the cave.

“Gunners crept out on a jutting rock which overlooked the scene and picked off the helpless folks exposed to view in the shallow cave,” Ann Morris wrote.

“A few Indians took refuge behind loose rocks, but these the gunners got by shooting against the cliff wall, depending upon the rain of deflected bullets to wound and kill.”

Voorhees said Massacre Cave was where the Anasazi had stored corn, which is the film’s climax because Earl Morris uncovered both the corn storage and the 1805 Navajo massacre.

He added that many Navajos believe Mrs. Morris might have gotten infected by the spirits because of her excavation work in the cave. She died an early death.

Ann Morris’s book was never taken seriously by the all-male archaeology establishment and was sold as a children’s book.

But her illustrations of their expedition revealed the rich colors photography of that time failed to capture, which is depicted throughout the film.

Ann Morris reveals her desire to explore and writes she would spin on her heels with her eyes closed in her book.

When she opened them, she’d see cliff dwellings waiting to be explored if she looked hard enough.

“I can recall most vividly one time when I became stalled, alone, and miles from any help. My luck has been good that day, for I had found an old Navajo cache, where perhaps more than a hundred years ago someone had stored away a few treasures to which he or she had never returned,” Ann wrote in her book.

“There was a little homemade doll, a gourd dipper, some weaving implements, and – prize of prizes – a long strip of red bayeta cloth,” she wrote.

“This material was begged, borrowed, and stolen by the early Navajo from the Spanish soldiers who used it for uniforms,” she wrote. “The Indians wove it into beautiful blankets, which are practically priceless today.”

Voorhees said his film will be shown on Aug. 12 during the 100th annual Gallup Inter-Tribal Indian Ceremonial at the El Morro Theater at 7 p.m.

He added they planned to show it on the reservation at special screenings in Window Rock and Gallup this summer.