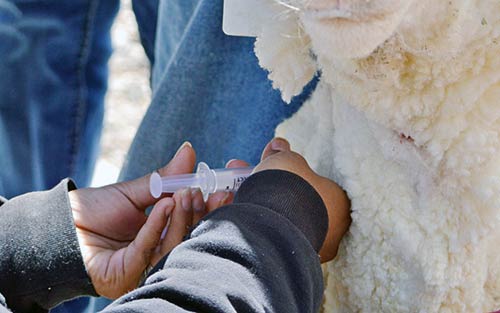 Ranchers get refresher on sheep care 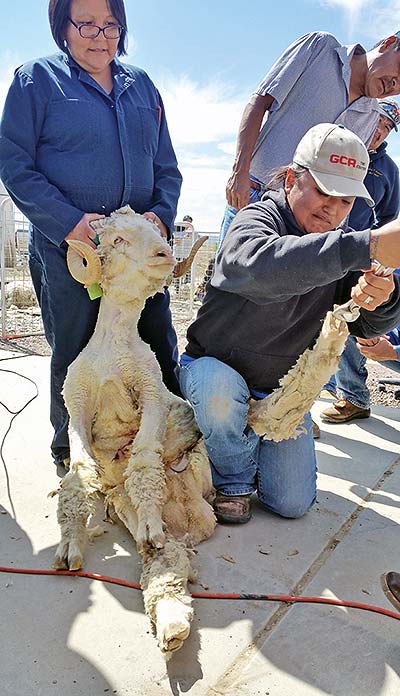 Juanita Garcia takes her shot at clipping a ram’s hoofs during the Navajo Technical University Sheep Workshop on May 2. (Times photo – Shondiin Silversmith)

The Navajo people aren’t strangers to taking care of sheep, but there is nothing wrong with a refresher course from professionals.

That’s why Juanita Garcia and her mother Brenda Garcia from Casamero Lake, N.M., attended the annual Sheep Conference and Workshop at Navajo Technical University on May 1-2.

Juanita said since their family has owned sheep for generations they’ve always herded, which means she’s always had an idea of how to take care of sheep.

Juanita was happy to see that her family has been properly caring for their sheep for years.

“We are doing everything right at home,” Juanita said, but she is glad they went to the conference because she still learned a lot.

The Garcias have a herd of at least 40 sheep, and they wanted to refresh their memory on proper livestock care.

“We have our own remedies,” Brenda said, adding that she enjoyed seeing how the professionals take care of their sheep.

Before the shearing demonstration, Brenda Garcia said that they would sheer their sheep whenever they felt like it, but now they know it should be done in the springtime each year.

“Everything just came into place, and now I know,” Brenda said.

The two-day event featured various topics involving the welfare of sheep on the Navajo Nation, and one day was dedicated to hands-on demonstrations.

“We wanted to really give them some skills they’ve been asking for,” said Twyla Zoey Benally, veterinarian at NTU, because they based their agenda on feedback from last year’s conference and workshop.

“It empowers them,” she added, because it gives them the chance to improve on what they’re doing as sheep owners. “If you practice you’re more likely to retain it.”
As part of the workshop, several demonstrations were given including shearing, ram selection, hoof clipping and vaccinations.

Navajo Technical University veterinarian Twyla Zoey Benally led a discussion during the NTU Sheep Workshop on May 2 about the different types of damage that could be done to livestock’s meat when handled poorly. (Times photo – Shondiin Silversmith)

Navajo Nation Veterinarian Scott Bender attended the workshop and led participants through several of the demonstrations, but the one he highlighted was trimming sheep hoofs.

Bender said the most common problem he sees among people’s herds on the Navajo Nation has to do with lack of hoof care.

Untrimmed hoofs can cause fungi to build up, and that in turn can lead to the sheep having trouble walking, Bender said, adding that it’s such an easy problem to fix but many don’t.

“It’s such an easy process to do. It’s something that should be done, and the tool to do it costs between $10 to $15,” Bender said, yet he sees so many sheep come in with foot rot and leg problems. “It’s such a preventable problem, just doing it once a year.” 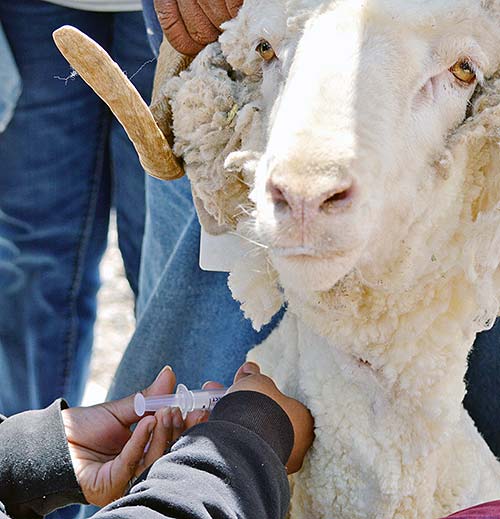 A participant at the Navajo Technical University Sheep Workshop, on May 2, jabs a needle into the neck of a ram to administer its vaccinations. (Times photo – Shondiin Silversmith)