The Force has always been with us’: Design company celebrates links between ‘Star Wars,’ indigenous culture 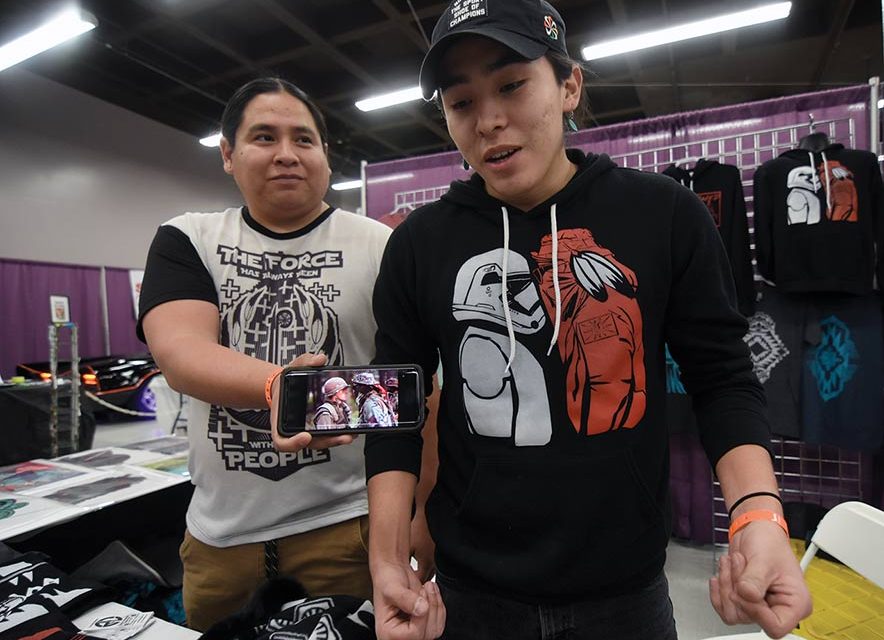 Navajo Times | Ravonelle Yazzie
Enoch, left, and his brother Manasseh Endwarrior explain their artwork on their merchandise at this year’s Albuquerque Comic Con on Friday.

The Endwarrior Brothers grew up in a home where Indigenous resistance and resiliency was celebrated. So it was no surprise that this translated into their small business, Reclaim Designz.

The brothers think very deeply about the artwork they create for their apparel, stickers and merchandise. Enoch Endwarrior started the company about five years ago and has been doing it full-time for a few years now.

He started his company because he had just graduated from college with a degree in political science but little work experience. He quickly realized that internships and fellowships were really important to obtaining a job post-graduation.

“When I first started out it was really my parents that really supported me and pushed me,” Enoch said.

His mother is a talented seamstress who had already been working the vending circuit selling her ribbon skirts and pow wow regalia.

“I started with one or two t-shirts,” he remembered.

Now, the company sells over a dozen designs that are a mixture of Indigeneity and Star Wars. This is why the company was selling at the 10th Annual Albuquerque Comic Con — the largest one to date.

The mixture of Star Wars and Indigenous thought is not a big leap to make as most IndigiNerds who are part of the Star Wars fandom will gush about the Indigenous themes and teachings within the trilogy.

“As my brother and I got older, I started learning more about my Navajo and Oneida side, I started to see the similarities,” Enoch said.

This is where he started to bridge the gap and learn more about his Indigenous identity.

“Especially living away from the community, I didn’t get those teachings like some people did who live on the interior of the Navajo Nation,” he said. “What filled that space was Star Wars. So, growing up I always wanted to be the Jedi, fight Darth Vader, fly in a starship.”

Now he embraces that bridge between Stars Wars and Native culture even more. He uses his art as a way to teach other Native folks about Native history.

For example, his shirt “The Force Has Always Been with Our People” is Enoch’s take on the Jedi symbol. In his design he incorporated eagle feathers, a pow wow staff, flute, and the star symbols in the shape of an arrowhead.

“Why I used that is because within the films they talk about the force as this energy that connects them all together,” Enoch said. “No matter what tribe you come from all these items are used to express similar philosophy: The idea that everything is connected.” 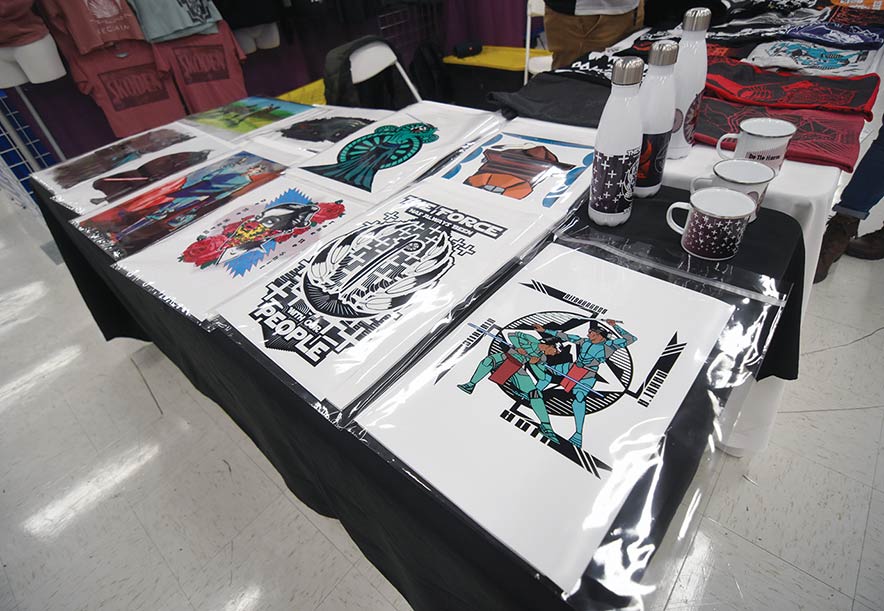 Navajo Times | Ravonelle Yazzie
Reclaim Designz’s artwork is a mixture of Star Wars and Indigeneity that can be found on t-shirts, cups, posters, stickers, and sweaters.

His little brother Manasseh Endwarrior is a senior at the University of New Mexico studying animation and media arts. Manasseh works for the company part-time and has started making designs for the company as well. His most well-known design was inspired by an image from the 1990s Oka Standoff.

In the summer of 1990, the Mohawk Nation defended the right to their territory In Quebec from further development by a non-Native company that was looking to expand their nine-hole golf course to include luxury condominiums on traditional Mohawk land that served as a resting place for those who have passed, according to the Canadian Dimension Magazine.

This resulted in a 78-day standoff and an iconic image of Indigenous resistance where Anishinaabe warrior Brad Larocque stood firmly in front of a Canadian soldier to defend the land. This image is what inspired Manasseh’s piece.

He kept the image of Brad Larocque almost entirely the same but changed the Canadian soldier into a stormtrooper. Stormtroopers are characters in Star Wars who serve as soldiers that protect and expand imperial rule for the Galactic Empire.

The Empire colonizes planets for their resources, including taking children to train as stormtroopers. It’s a narrative every indigenous person recognizes from their own history.

“I want to bring that history back,” Manasseh said of his design. “I wanted to show that even though Standing Rock was really highly seen through social media, I want to show that wasn’t the first event to happen like that in a Native community. I chose this image because Mohawks are brothers to the Oneida Nation, but also to me it was very inspiring to see how they were successful in defending their land.”

A lot of their pieces also focus on depicting the strength and power of Native women. Enoch created an image of a muscular Native woman in a skirt and sash belt. She is holding a lightsaber, a weapon used only by Jedis in Star Wars. She looks like she is surrounded by the Force.

In the future, the company wants to expand the type of designs they create to include different fandoms. Mannaseh recently made an airbender-inspired sticker from the Nickelodeon animated series, “Avatar: The Last Airbender.”

Enoch would like the company to continue expanding their customer base in this way because they’re more than just Star Wars fans. The brothers like a bunch of different comics and animés.