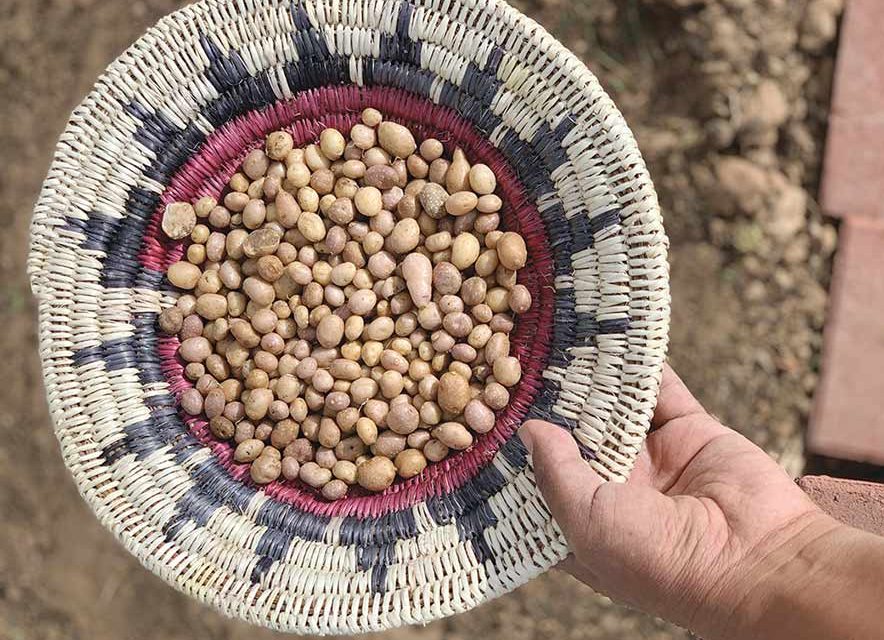 Special to the Times | Alastair Bitsóí The Four Corners potato, solanum jamesii, has been cultivated by Indigenous North Americans for about 11,000 years. The tiny tuber is packed with nutrition and is enjoying a resurgence among Native farmers, including some Navajos, with support from Utah Diné Bikéyah’s Traditional Foods Program and other organizations interested in restoring Native foodways.

By Alastair Lee Bitsóí
Special to the Navajo Times

Kyle Jim normally grows corn, beans, squash, and other rooted vegetables at his three-acre farm in Shiprock along the San Juan River.

This growing season, Jim will grow Four Corners Potato tubers from Mesa Verde, a superfood that researchers say has been cultivated for over 11,000 years by Indigenous cultures of the Southwest.

“I had no idea about that potato,” said Jim, who was among 13 Indigenous farmers from the Navajo Nation, Southern Ute, Jemez Pueblo, Hopi, Tewa, and San Carlos tribes that attended a “Potato Cultivation Training” on May 1 in Bluff, Utah.

Held just outside Bears Ears National Monument, ancestral lands to the Diné, Hopi, Ute, Zuni and other Pueblo tribes throughout the region, the potato training was hosted and funded by the nonprofit Utah Diné Bikéyah’s Traditional Foods Program, Red Butte Garden, the Natural History Museum of Utah, and the Native American Agriculture Fund.

As a farmer, Jim is familiar with standard potatoes sold in the grocery stores, or even the fingerlings he grows.

But not the nine species or genomes of the Four Corners potato, known scientifically as solanum jamesii.

Utah Diné Bikéyah invited Jim and other farmers to its training in an effort to help its Traditional Foods Program work with farmers to help “select, grow, and distribute the best-tasting and most nutritious potato within Native communities and to build a new food market” via restoration, cultivation, marketing and land conservation.

“What I learned today about these micro potatoes is fascinating: that it provides so much of a nutritional impact to our bodies, to our health, to our well-being, that there’s so much data within the potato to help me understand my identity,” Jim said. 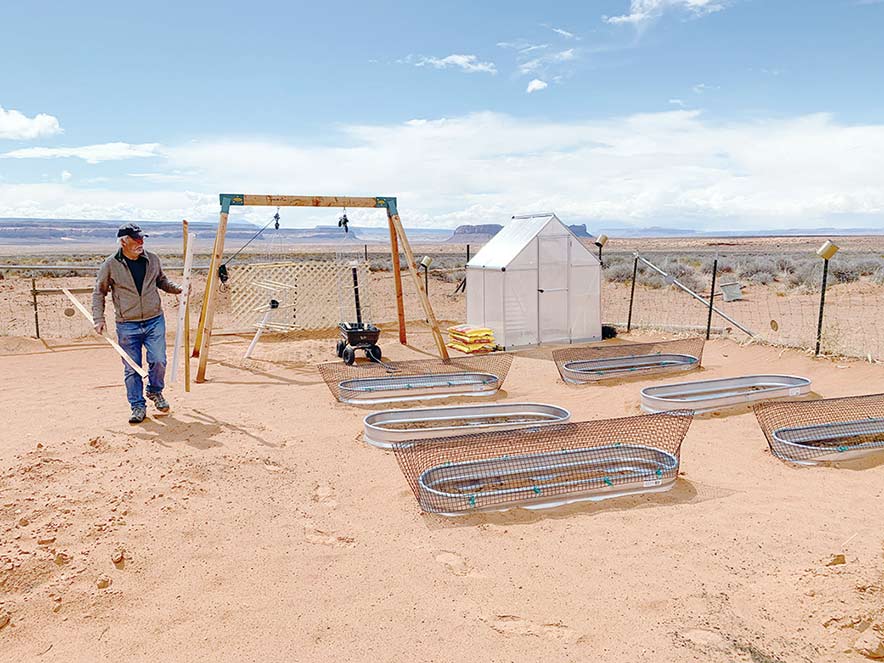 From the training, Jim learned the tiny potatoes contain three times the protein and twice the calcium of organic red potatoes.

He also learned about the biology and history of it in presentations from Cynthia Wilson, traditional foods program director at Utah Diné Bikéyah; Bruce Pavlik, director of conservation at Red Butte Garden; and Lisbeth Louderback, curator of anthropology at the Natural History Museum of Utah.

Wilson told the Navajo Times that the purpose of the Four Corners potato workshop earlier this month is to get these potatoes back into the hands of Indigenous farmers like Jim.

With a master’s degree in nutrition, Wilson also knows the nutritional densities of the tiny tubers, and has been a key source of the Indigenous knowledge around foods through her work with Utah Diné Bikéyah, which has been leading the effort to defend and restore Bears Ears National Monument back to 1.35 million acres under Indigenous-led land management planning.

“Our ancestors tended to these ancient gardens since time immemorial,” Wilson said at the workshop. “Drought shifted our food systems to where these resilient tiny potatoes can stay dormant for up to six or eight years depending on the monsoon season.

“Restoring our cultural memory in growing, tasting and sharing this medicine among indigenous farmers is an act of healing and rematriation,” she said.

While there may be some criticism about how the Four Corners potatoes are being rematriated back into the hands of Indigenous farmers, Wilson also sees pushback from some Indigenous farmers who don’t like the fact Western researchers are involved.

However, particularly during this time of the ongoing COVID-19 pandemic, she finds it necessary to collaborate with researchers like botanist Pavlik and archeologist Louderback.

Wilson, Pavlik and Louderback have collaborated since 2016 on the Four Corners potato. Louderback is specifically credited with finding evidence of this tiny tuber in 2013 on grinding stones from an Ancestral Puebloan site in Grand Staircase Escalante National Monument.

Her work proved that Indigenous North Americans have been eating the potato for more than 10,000 years.

“Part of climate change is a behavioral change, strengthening our reciprocal relationship with the land, and this potato relative who nurtures and sustains our way of life is at the heart of what we are taught as life givers,” Wilson said.

She noted that bringing together traditional knowledge and Western science requires tough conversations around cultural sensitivities and consent-based approaches.

“It’s a start,” she said, “as a way to address health disparities and revitalizing the potato, especially during this time of need. Our ancestors left these potato seeds so that we can continue our responsibility in cultivating that knowledge and subsistent lifestyle for future generations.”

When it comes to the science side of this effort, Pavlik adds that the partnership with Utah Diné Bikéyah has been critical to making connections to Native communities of the Four Corners region.

As a researcher, he does not know the communities as well as Wilson does, and Native communities are often distrustful of outside scientists.

“We do not want to act like we’re discovering something,” Pavlik said. “We’re sort of helping with the rematriation. And Cynthia has been essential in making the connection.”

After the workshop, Jim had the option to choose Four Corners potatoes from Bears Ears, Newspaper Rock, Mesa Verde-Lower Navajo Canyon, or the Paria Plateau.

He chose to grow the Mesa Verde tubers this summer.

“I feel that everybody needs to be growing their food,” Jim said. “It doesn’t have to be a high production like a farm. But if we could just start small, like a micro garden, indoor garden or even a backyard garden, we could feed so many people.

“We could feed ourselves,” he added, “and we can easily reach 102 years old.”