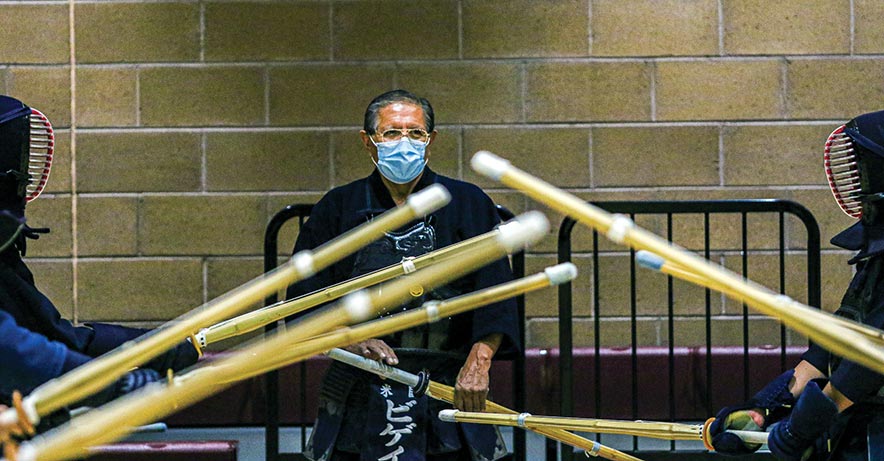 Navajo Times | Cyrus Norcross
Davis Begay watches his students, or kendoka, practice striking techniques with one another on Oct. 27 at the North Domingo Baca Multigenerational Center in Albuquerque.

The sharp snap of the shinai, Japanese bamboo swords, cracking into each other echoed through the basketball court in the North Domingo Baca Multigenerational Center.

The Kendo students, or kend?ka, are dressed in navy-blue kimonos and wear no shoes as they practice swordsmanship under their sensei, who watches his students with a keen eye, correcting them on footwork, stance and sword strikes when he needs to.

Their sensei, who holds the rank of 4th Dan, is 74 years old and, as far as he knows, the only Navajo to practice Kendo. His name is Davis Begay.

Begay gained interest in Kendo while he was stationed in Japan in the early 70s, after doing a 13-month combat tour in the Vietnam War in 1968 as a Marine.
During his time in Japan, Begay would watch the Japanese Self Defense Force and Japanese policemen practice Kendo.

Begay was unable to practice the martial art because at the time Japanese Kendo practitioners were against teaching foreigners ”the way of the sword.”

“But they let me watch, which was fine with me,” Begay said.

After serving six years in the Marines, Begay returned to Albuquerque to pursue an international studies degree at the University of New Mexico.

While studying at UNM, Begay found a Kendo club associated with the university and began to practice with fellow students. His Kendo aspiration began to soar.

“I joined them and found myself becoming the leader of the group,” he said. “I began to manage the dojo and got affiliated with the All United States Kendo Federation.”

Kendo has been part of Begay’s life ever since getting discharged from the Marines.

He said, “It’s a personal challenge. Learning Kendo has focused me, and pointed me in the right direction.”

As Begay gained more experience about Kendo, he understood what the foundation of the martial art was.

“You’re using your spirit, using your focus and your mind,” Begay explained. “Combine them together, you learn to overcome the person mentally.

“Once you take over your opponent mentally, it is easy to strike,” he said. “Even though this is combat with swords, just like in the Samurai period, the idea was not to use the sword.

“So that is like showing compassion,” he said, “not drawing your sword, showing respect and being sincere.”

Begay saw that the Japanese warrior culture was similar to Native Americans’.

“They are both very oriented in taking care of family members and respectful to their elders,” Begay said. “I see that relationship in that way.”

With experience Begay rose to the rank of 4th Dan and began teaching and hosting classes. 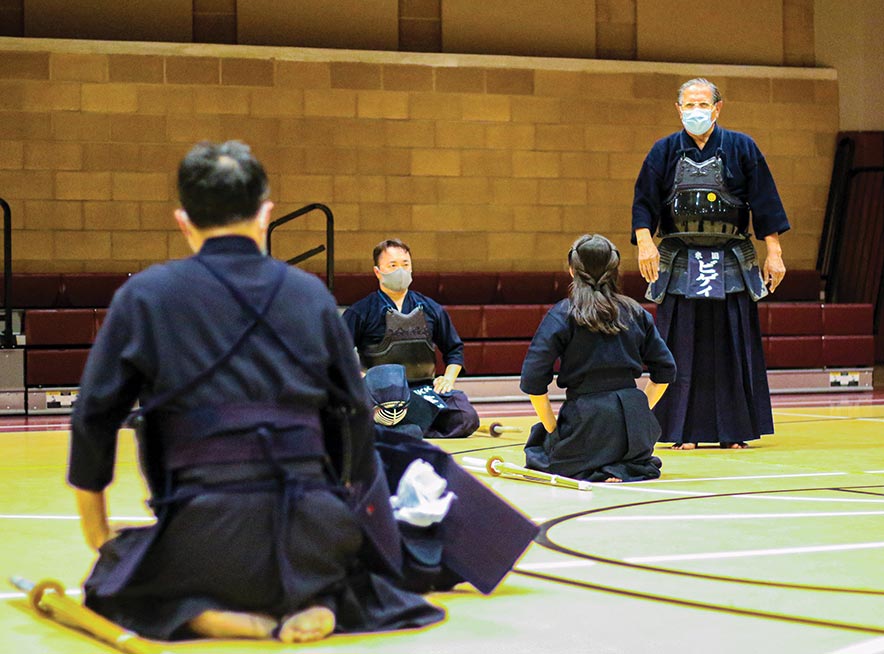 Navajo Times | Cyrus Norcross
At the end of the Kendo class, Davis Begay critiques his students on their performance. Begay has the rank of a 4th Dan sensei.

“What I see, especially the young people, is that they are enjoying Kendo,” Begay said. “They learn from Kendo. It is changing their life around and their outlook on life.

“So the kids have more respect and how to treat people on a one-on-one basis,” he said.

In his classes, Begay teaches his students to focus, controlling one’s movements and showing compassion. Students walk up to Begay to let him know that the teachings and skills are bringing focus to their lives and to their jobs.

“There are a lot of benefits,” Begay said. “You’re actually not trying to hurt the other person, but build up your character. Basically it teaches them how to react and not overreact, how to keep your emotions in check, while guarding yourself, physically and mentally.”

To become a sensei, Begay needed to go to Japan to gain training and wisdom.

Once a year, the All Japan Kendo Federation invites two members from every country that has a Kendo organization to go to Japan free of charge and take lessons to become instructors.

Begay was chosen three times to go to Japan and learn how to become a sensei. Begay said the training was hard and rigorous.

“We live in a dormitory, we are up at five in the morning practicing Kendo, then we have breakfast,” he said, “then we train four or five hours, then we have lunch. Then more Kendo training, dinner, have classes and then lights are out at 9 p.m.”

As far as Begay knows, he is the only Navajo to have taken up the lifestyle of Kendo and has only trained one other Native, who is Laguna.

“I had one student from Laguna who stayed with me for a while,” Begay said. “He was so into Kendo that he modified his garage into a practice area. He was really into it.”

As Begay continues to train non-Native students, he would like to see more Native Americans involved with Kendo in the future.