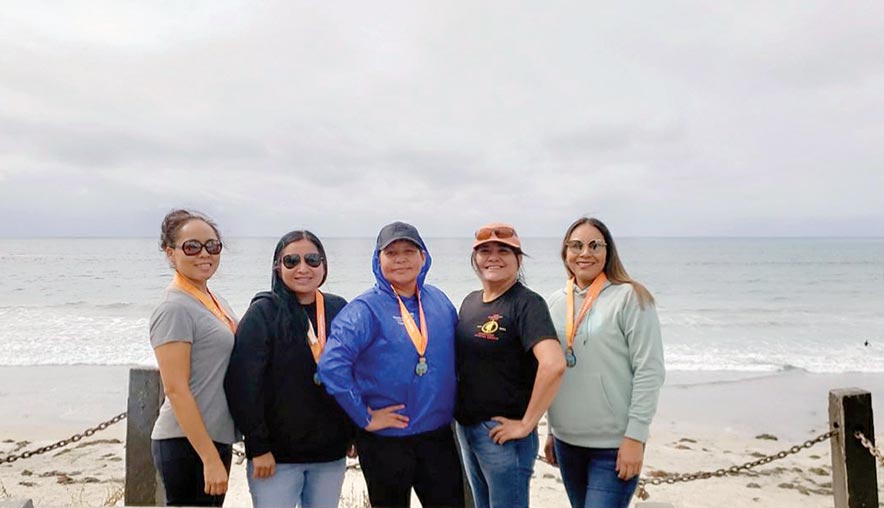 One of the things that has remained a relatively safe activity throughout the pandemic is running.

But running by yourself can be lonely. Serious amateur competitors like the Navajo Times’ own Amber Wauneka build a lot of their social life around traveling to races with their running buddies — and actual in-person races have been hard to find for the past couple of years during the COVID pandemic.

Wauneka, the Times’ editorial assistant, has been running grueling distance races like the Ragnar relay series for years after getting into running as a way to stave off a family propensity for diabetes.

Her vacations are generally spent flying to races around the country, usually with a contingent of equally fit women friends.

But for the last couple of years, her running has been limited to the trails around Window Rock, usually by herself. You can’t really say she got lazy; she can still run farther and faster than probably 99.9% of the general public. But with no competition, she was afraid she was losing her edge.

“My weight is not what it was before the pandemic, and neither are my times,” lamented the 43-year-old Wauneka. “I haven’t been to a gym in almost two years.”

Sunday of last week, the San Diego Rock and Roll Marathon rolled around. It’s a fun event that combines running with entertainment; this time they had an Elvis impersonator, a Michael Myers character and a Tom Cruise look-alike.

A team of friends

“We were thinking the pandemic would be over by this time and everyone would be vaccinated,” recalled Wauneka, who is Choctaw born for Kin Yaa’áanii.

But with the new variants spreading like the California wildfires, her crew debated whether going was such a good idea.

They decided to be as careful as possible, renting an Air B&B so they could do their own cooking rather than going out, and wearing their masks everywhere.

“I was nervous getting on the plane,” she recalled. “I actually saw people who were masked up in the airport take their masks off as soon as they got on the plane.”

There was some consolation in being vaccinated.

“I thought, ‘As long as I wear my mask and continue washing my hands, I should be OK,’” she recalled.

The friends wondered how the race organizers were going to handle the starting mark, which would involve a tightly packed field — some 40,000 runners had signed up for the various races, ranging from a 5K to a full marathon.

One of Wauneka’s crew ran the 5K and the others had their sights set on the half-marathon.

“The way they did it was to put the runners in ‘corrals’ according to their (previous) times,” Wauneka explained.

Within the corrals, they would divide the runners into groups of five and let the groups start three seconds apart.

Wauneka ended up in Corral 8, among some of the faster runners, with her friends mostly in the 20s.

“I actually had to wait for about 30 minutes before I could start,” she said. “My friends had another 45-minute wait after I started.”

That may not sound like much, but weather is everything in the distance-running game. High temperatures and a sun high in the sky sap the body’s strength and wick away precious moisture.

By the time Wauneka started the race, which was supposed to start at 6:45 a.m., it was 7:15 and the sun was up. The temperature would rise to the mid-eighties before she finished two hours and 18 minutes later.

As for her friends, “I’m sure they were already hot just standing there by the time they started,” she said.

“They had the music playing the whole time we were waiting, and I’m the type who likes to dance around to the music,” she said. “The time went really fast. I appreciated that they were taking precautions. It was very organized.”

In spite of all the precautions, running with a pack again felt undeniably great.

“The hills there are nothing like the hills here,” Wauneka said. “The elevation was great, coming down to sea level after I’d been training here (in Window Rock). I was passing people. I felt good.”

She was happy with her time of 2:18 even though it was nowhere near her pre-pandemic best of 1:45 for the roughly 13-mile race.

“This was a test to see where I am right now,” she said. “I honestly thought it would be closer to three hours.”

Begay, who is Kin Lichíinii born for Kin Yaa’áanii, was disappointed in her time, but “if anything, it was motivation to train harder for the next one,” she said.

She enjoyed seeing San Diego, and the people in the residential neighborhoods along the route were extra-supportive, she said.

“They were all out there with water and snacks, cheering us on,” she recalled. “One family was like, ‘Give five to the dog and he’ll give you energy!’”

She even saw a celebrity, possibly.

(According to the website yourbasin.com, the 62-year-old actor is a marathon runner, so it’s possible!)

A night to decompress

The women gave themselves a night to decompress and flew back Monday, but their flight was delayed due to heavy rain and Wauneka ended up getting home at 3 a.m. Knowing the next day was a press day, she slept fast and showed up for work on time, asking editor Duane Beyal to let her go home early after she finished her deadline work.

“He said ‘Sure,’” she recalled in an interview Thursday. “I rested up and felt fine yesterday.”

Fine enough that she’s already planning her next race, which is next week in Fort McDowell.

She realizes there’s still a lot of risk involved, but she’s playing it as safe as possible.

“Some friends attend the gym in Gallup (since the one in Window Rock is still closed),” she said. “As much as I want to work out, I’ll wait. If the pandemic has taught me anything, it’s patience.”

But she’s not going to lock herself in the closet either.

“I don’t mind running by myself. I like the beauty and the sounds of nature,” she said. “But it’s not the same as running with other people and friends, and I need that too.”

“To be among other runners again, it was such a great feeling,” Begay added. “I can’t wait to do it again.”