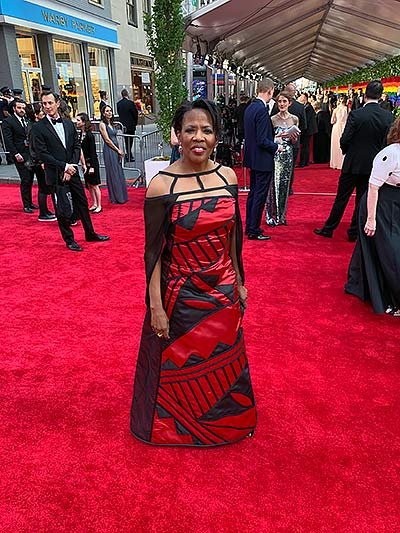 Submitted
Colleen Jennings-Roggensack poses on the red carpet in an ACONAV original dress.

If you caught the Tony Awards on TV earlier this month, you may have also caught a glimpse of one of Native designer Loren Aragon’s latest creations.

“It was our first-ever red carpet debut,” said Aragon in a telephone interview. “According to Colleen, a lot of people were really drawn to the dress. It added to the diversity of the evening.”

Since Jennings-Roggensack was the only Arizonan among the voters, Aragon used the dress to depict the Southwest with his signature lattice design and motifs from Acoma pottery.

Red was chosen because it was one of the colors Jennings-Roggensack requested, but it also has a lot of significance for Natives, Aragon explained.

“In my culture, it represents honoring the ancestors,” he noted, “and it’s also the color of the Missing and Murdered Indigenous Women awareness movement.”