Ripped up fabric and sticks 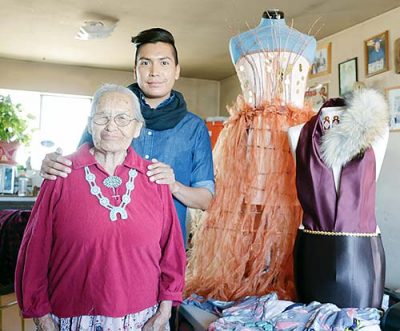 Jolonzo Goldtooth, right, poses with his grandmother Jenny Pete on April 9 in Huerfano, N.M. Goldtooth is a Navajo fashion designer and has his own fashion line called JG Indie. He said that his grandmother is a big inspiration for him. (Times photo – Stacy Thacker)

When people think about a fashion designer’s studio, a wide-open space covered in fabric and mannequins might come to mind.

That’s not the case for Navajo fashion designer Jolonzo Goldtooth. In fact, all his designs come from his small bedroom inside his grandmother’s house in Huerfano, N.M.

Goldtooth has been designing for over two years, and all of his designs are created in a room that measures about eight square feet. Inside his little studio, Goldtooth shares a bunk bed with boxes full of fabric.

On one wall hangs an old gun rack that is used to hold his spools of thread, while another part of it holds up magazine clippings he uses as inspiration.

Goldtooth said he has a copy of Vogue magazine since 2012 – which he calls his bible – when he started, and if he sees anything he likes he’ll pin it to his wall.

“It’s pretty simple but in this small little space I’ve been able to create all that is out there,” he said, adding that he uses an industrial sewing machine that belonged to his grandmother because it’s proven to be reliable.